Board and National Council

The FSA’s structure features a democratically-elected National Council which embeds within it fan representatives from clubs at Premier League, Championship, League One and League Two, and National Game (non-league) level.

Community-owned clubs elect their own representatives as do members of our Women’s Game network.

Each of these networks are entitled to three elected representatives, with the responsibility with the networks to fill the positions.

Six individual fans are also elected and, in addition to this, associate organisations have their own representatives as does the Fans for Diversity network.

Election process: Networks are responsible for electing their own representatives. Nine members are elected from the National Council to make up the Board alongside the chair and vice chair. 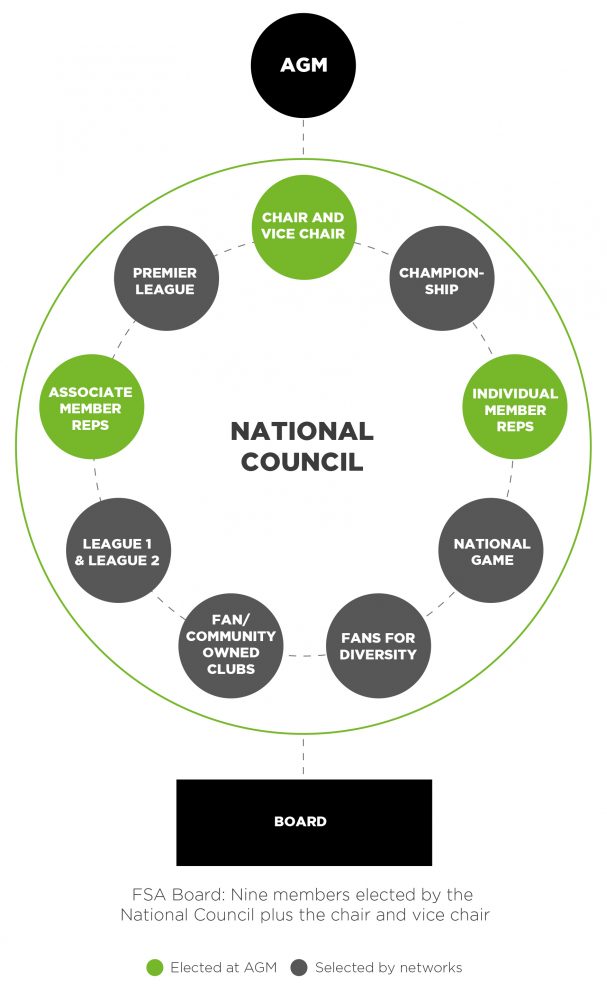 What role do the FSA’s different bodies play?

The FSA Conference (AGM) is the supreme governing body of the FSA. It is the opportunity for any affiliate, associate or individual member to make an input into the work of the FSA. It makes policy and determines overall strategic priorities, by passing resolutions and receiving, and approving or amending, reports from the National Council, Board or chief executive.

The National Council comprises elected representatives from our networks and individual members, and has at least three meetings per year. It implements the decisions of the Conference and decides policy and strategy on matters which arise and require decisions between Conferences. It makes appointments to external bodies and oversees the work of the Board without replicating or revisiting discussions on issues which are the responsibility of the Board. It cannot mandate or overrule the Board on matters which are legally the responsibility of company directors.

The Board is appointed by the National Council and is responsible for the administration and running of the organisation including financial, administration, HR and conduct matters, and exercising the legal responsibilities of directors. If necessary the Board can determine policy issues which require a decision before the next National Council meeting.

There are more than 120 FA Council representatives. The body, along with FA staff and the FA Board, aims to “deliver an effective and professional organisation for the greater good of English football”. FSA Board members Tom Greatrex and Chris Paouros sit on the FA Council as supporter representatives, Chris having taken over the role from FSA chair Malcolm Clarke in 2021. FSA staff member Anwar Uddin is also on the FA Council in a personal capacity as a National Game football community representative.