It’s been a busy 12 months for the FSF, here we look back at some of the highlights (and lowlights) of 2018…

VAR made the headlines as it had an extremely ropey introduction to English football – causing controversy at Anfield during Liverpool’s fourth round FA Cup loss to West Bromwich Albion. The match was frequently interrupted by referee Craig Pawson’s use of VAR with match officials using the system on eight separate occasions. In the first half alone, he employed VAR to disallow an Albion goal, award a penalty to Liverpool, and allow the visitors’ third goal.

And as we said at the time: “FSF policy was always to back goal-line technology providing that the results were instantaneous and didn’t break the flow of the game. Clearly that didn’t happen on Saturday with VAR.

“In moments when the game was paused there was a lack of clarity about how decisions were made and a lack of communication in relaying information to match-goers.

“Like everyone in football the FSF is keeping a close eye on this and, as a member organisation, we’ll be speaking to supporters to see how they feel VAR is progressing.”

Football’s relationship with TV was once again under the spotlight as the Premier League completed it’s latest broadcast auction covering the 2019-2022 seasons. A cool £4.464bn was netted for the competition’s clubs – with two live packages and foreign rights still to be sold. The latest auction also marked the first time non-traditional broadcasters would secure Premier League games – with Amazon winning live games for its Amazon Prime online-only service.

Our Kick-Off Times Working Group also continued its detailed work on growing impact TV companies are having on match-going fans.

The latest round of broadcast selections had once-again caused a massive headache for fans, with many fixtures now being played at times when no public transport was available.

In March, we supported two groups of fans, at Tottenham Hotspur and Bristol City, who were left astonished by the hikes to season tickets and matchday prices by their respective clubs. At Tottenham Hotspur’s new ground, many fans are facing some eye-watering increases. With prices ranging from £795 to £2,200, watching Spurs at New White Hart Lane will be a seriously expensive. Bristol City also ramped up their prices, which left the Bristol City Supporters’ Club and Trust “angry and bemused” – particularly as the hikes hit older and younger fans.

April was a huge month for the standing campaign as West Bromwich Albion’s application to have rail seats fitted at the Hawthorns was rejected by the Government. Sports Minister Tracey Crouch then poured petrol on the situation later when she said that standing was only sought by a “vocal minority”. A pre-existing safe standing petition then took over and secured more than the 100,000 signatures required in the following months for a Parliamentary session which led to some much better standing news in June.

Later that month the FSF and the EFL launched the joined Stand Up For Choice campaign, which surveyed thousands of supporters across the country, and provided vital evidence for the debate.

Shrewsbury Town made history by becoming the first club in England and Wales to have rail seating installed and used in their ground. Around 500 rail seats were unveiled at New Meadow following a long crowdfunding campaign. FSF standing campaign lead Peter Daykin said: “Standing at football is a reality and Shrewsbury Town fans now have real choice in how they watch their football at New Meadow. We urge the Government to change the all-seater law to allow more clubs to offer their customers genuine choice.”

In June the FA announced that for the first time a winter break would be introduced in English football, starting in the 2019-20 Premier League season. Taking place in February, the two-week winter break will see a round of Premier League games split over two weekends with the fifth round of the FA Cup moving to midweek. Fifth round replays will also be scrapped, replaced with extra time and penalties, to accommodate the change. Despite this, winter breaks remain unpopular with supporters, as shown once again in our latest National Supporters Survey – where only a third back the concept.

The potential (failed) sale of Wembley also became public in June. Former-England defender Gary Neville said the sale would not be a long-term solution to the funding issues facing grassroots football. “£500m is a pittance in the game of football,” Neville told MPs. “It’s incredible that we have to sell Wembley to fund grassroots. 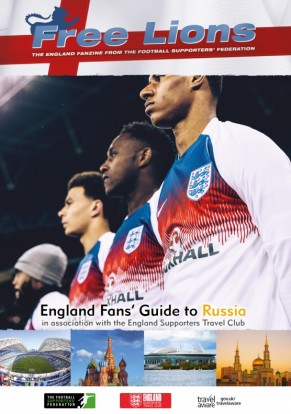 Throughout June and July the FSF once again supported England fans abroad as they followed the team to the semi-finals of the World Cup in Russia. We printed and distributed thousands of the special Free Lions Guide to Russia ahead of the tournament, as well as producing match-specific editions of the England fanzine along the way. Russia was a great host, and confounded expectations. The idea of any hostility between the people of Russia and visiting football fans from England was decisively disproved.

And at the 2018 FSF AGM held at the end of the month, members voted in favour of merging with the other national supporters organisation, Supporters Direct.

As the domestic season got back underway there was a flurry of activity off the pitch, as the FA publicly backed reform of the all-seater legislation and La Liga announced that it wanted to take competitive fixtures to North America.

Regrettably, policing came into focus too following an incident at the away end at Deepdale where Lancashire Police officers used pepper spray on a number of visiting Stoke City supporters. FSF caseworker Amanda Jacks met with senior officers following the incident and said “important lessons should be learned.”

Late summer saw the EFL break with decades of convention when it allowed the domestic broadcast of 3pm kick-offs on its ifollow streaming service. We said: ““This has been implemented without any consultation with supporters and the FSF will be raising the issue with the EFL directly. The Saturday 3pm blackout is part of the tradition of English football and maintaining that is crucial to the economic survival of many clubs lower down the football pyramid.”

There was more TV bother for fans in the Premier League when Everton’s October visit to Manchester United was moved to a Sunday afternoon kick-off despite being picked for an early-Saturday kick-off in the previous round of TV picks. Sky Sports made the change after Manchester City’s visit to Tottenham Hotspur had to be moved to a Monday evening slot due to delays with their stadium build. Manchester United Supporters’ Trust described Sky’s move as “naked commercial opportunism” that would likely leave thousands of fans out of pocket.

In October we gathered fans views on the potential sale of Wembley, however as the fan representative on the FA Council (and FSF chair) Malcolm Clarke prepared to take that evidence to the governing body the sale fell through. More than 2,000 supporters took part in our consultation and the majority (58%) were against the sale. Of the 2,039 supporters consulted 68.5% said more of the Premier League’s income should be invested in grassroots football facilities as an alternative to selling Wembley.

54% of supporters strongly disagreed that the FA should accept Khan’s package to fund grassroots. Finally – 64% said even if Wembley is sold football should be prioritised over other events.

Following on from the vote at the FSF AGM back in the summer, a special EGM was convened for November to confirm the merger of the FSF and Supporters Direct. FSF chair Malcolm Clarke was elected as the chair of the newly-merged organisation which he said can give fans an even more effective voice in how the game is run. SD chair Tom Greatrex was elected vice chair of the new organisation. “This marks an historic day for the fan movement,” Malcolm said. “As one unified organisation we are now in a perfect position to represent supporter interests and lobby for the changes in the game which fans are desperate to see.”

The FSF Awards in partnership with Virgin Media were held once again at the Tower of London in the first week of December. Liverpool’s Mohamed Salah was named Men’s Player of the Year and Arsenal’s Beth Mead took the Women’s Player of the Year award. It was a record breaking awards show for us, with more than 366,000 votes cast, making it largest supporter-led awards in the UK.

“Usually I share any awards with my teammates and all the staff at Liverpool, but on this occasion I would like also to dedicate it to the Liverpool fans for their incredible support. Thank you.” ❤️

The FSA’s first Annual Review, presented and accepted at our AGM in London on Saturday 29th June, is now available to download.