The third round of the FA Cup is upon us once more and it still has a special place in the English footballing calendar.

And if you happen to reach the final this year, you’ll have a much better chance of getting a ticket thanks to an FSF-led campaign.

In recent seasons, one of the main complaints we’ve had from supporters has been the amount of final tickets that go to the “football family”, executives and sponsors – rather than into the hands of real fans.

This time last year we led a campaign, supported by our associate and affiliates, to secure more FA Cup final tickets for real fans. More than 100 supporter groups co-signed our letter asking the FA to increase the amount of FA Cup finals given to the competing finalists.

Alongside supporter organisations from across the country we argued that this was the right thing to do for the good of the game and the long-term health of a competition that we all love.

We were able to do this because of our membership, the thousands of individual and affiliated members up and down the country. We want to get more results for match-going fans, so need more supporter organisations to join us – it’s free and will only take a minute of your time.

Our unique network, including travel clubs, fanzines, supporters trusts and atmosphere groups, brought together football fans from across English football to support the lobbying of the FA on the matter – 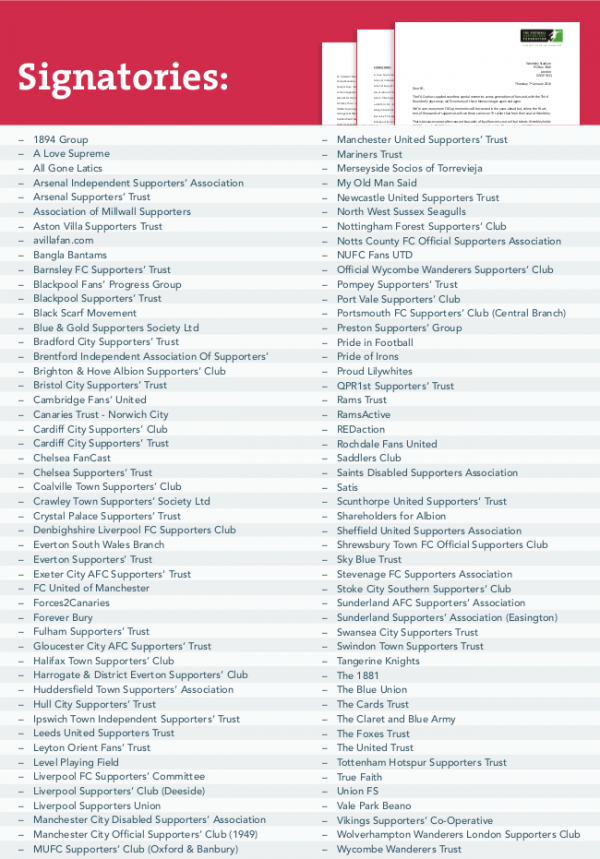 Having such a vast and diverse network to campaign on behalf of is one of our great strengths as an organisation – working together we have secured results for match going fans.

If your fan group wants to be involved in campaigns such as our final ticket campaign then make sure you’re registered with us. It’s easy (and free!) to join, and you can find out more about us here.

As ever, we’re also keen for individual members to join us. So if you want to keep up to date with important supporter issues, or even get involved yourself, sign up as an individual member.

Thanks to Richard Fisher for the image used in this blog. Reproduced here under Creative Commons license.

How much money is enough money? The concept of a European super league has been around since the late-80s but the idea that won’t die has once again resurfaced – this time led by Juventus chairman Andrea Agnelli (above) and the European Club Association (ECA).

Notts County fans have rallied around their club by raising more than £4,000 to cover unpaid wages for club staff.

The Football Supporters’ Association will invest £5,000 in AFC Wimbledon’s Plough Lane Bond which was launched to help the supporter-owned club to return home.