Safe Standing & inclusion in Orlando: “Finally someone gets it”

As the safe standing campaign has progressed over recent years more and more spurious arguments have emerged about why it can’t happen in England – one example is that safe standing will exclude disabled supporters. Here former FSF national council member, and wheelchair-using Arsenal fan, Steve Powell tells us why the Orlando City Stadium debunks that myth…

Last year I had the chance to visit Orlando City Stadium with two mates for their match against the Chicago Fire in Major League Soccer (MLS). It left me with two indelible memories. Firstly, it’s without doubt the most purple place I’ve ever been. Secondly and far more importantly for a wheelchair user fan like me it’s a shining beacon of inclusion. 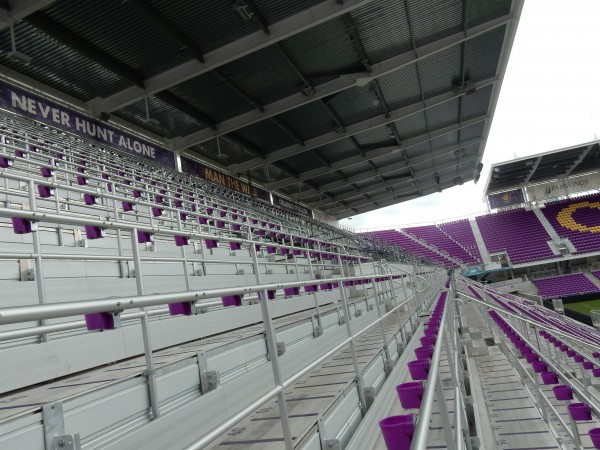 I’ve groundhopped all over the planet from Soccer City in South Africa to the Sydney Football Stadium to the Estadio Monumental and the Bombonera in Buenos Aires, the Maracana in Rio, the Estadio Centenario in Montevideo, the San Siro and the Bernabeau, Tokyo’s Ajinomoto Stadium, the Veltins Arena in Gelsenkirchen, Munich’s Allianz Arena.

I’m an out and proud football trainspotter anorak. I’ve been to grounds old and new throughout Britain.

The Orlando City Stadium is a beacon of inclusion for disabled fans, but it’s much more than that. It represents inclusion in the widest sense.

It contains sections to suit every pocket and temperament from the posh executive boxes to the Purple Wall safe standing area behind one goal, complete with cup holders for your beverage of choice (which can legally include beer). And disabled fans have places in every section of the ground from the prawn sandwich boxes to the Purple Wall (modelled as a smaller version of Borussia Dortmund’s Südtribüne Yellow Wall). 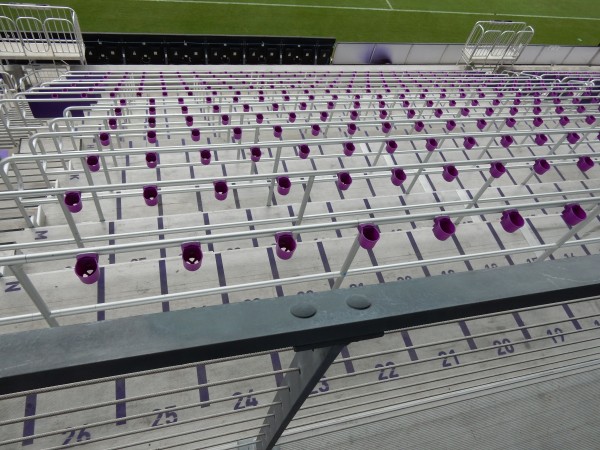 When we first entered the ground I almost cried. Finally. Somebody gets it. Disabled fans aren’t charity cases to be placed around the corner flags. We’re fans. Some of us want a more tranquil match experience. Some want the friendly madness of the Purple Wall.

Courtesy of two disabled platforms integrated into the Purple Wall with unobstructed views of the pitch that’s exactly what Orlando City Stadium offers. The atmosphere is mental. Completely unhinged. Off the chain. Orlando City fans are loud and proud. They sing their hearts out for the lads from kick off to final whistle. I’ve seen as passionate fans elsewhere but none who best them.

The only exception at the Orlando City Stadium to the “everything purple” rule is the 49 seats in rainbow colours commemorating the murder in 2016 of 49 people at a gay nightclub in Orlando. Inclusion is in the club’s DNA.

How was all this possible? Simple but apparently beyond football administrators, regulators and lawmakers here in Blighty the club ownership listened to supporters. 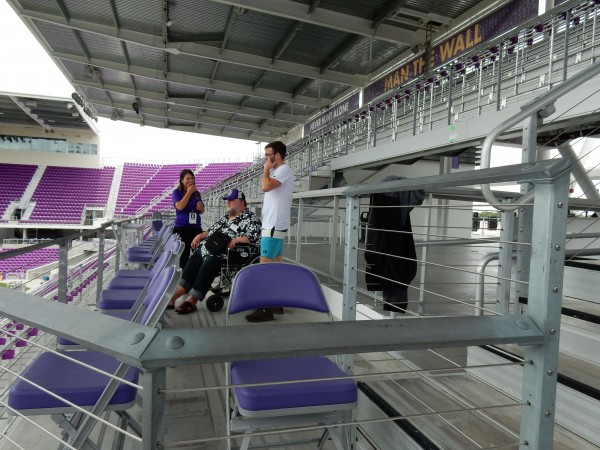 Not only do they listen. They act. Look at the ongoing struggle of disabled fans’ campaign group Level Playing Field for disabled access fit for the 21st century.

Look at the FSF’s ongoing campaign for a safe choice to sit or stand. There is progress but it’s glacial. Look at the Premier League’s broken promises on access. Look at Sports Minister Tracey Crouch’s stubborn refusal to engage on anti-standing regulations which do nothing to promote either safety or inclusion.

Then look across the Atlantic and see what can be achieved with real dialogue when all parties commit to listening and acting. I’ve seen the future. It works.

Wolverhampton Wanderers have become the latest club to explore standing accommodation following the installation of a standing area at Molineux.

In the coming weeks, football fans across Europe will protest UEFAs outdated ban on standing at European games under the slogan ‘Europe wants to stand’.