Last week, supporter representatives from the FSA’s Premier League network and National Council met with Mike Riley, managing director of the Professional Game Match Officials Limited (PGMOL) and his deputy Adam Gale-Watts to discuss the use of VAR in the Premier League.

The online meeting was part of the new commitment to dialogue between supporters and the football authorities following the FSA’s AGM last year – where fans’ concerns about VAR’s impact on the game were flagged in two motions at conference.

Riley provided supporters with a detailed breakdown of the Premier League’s VAR process, its remit, the impact it’s having on Premier League football as well as the wider discussions ongoing with FIFA and International Football Association Board (IFAB).

“This is the most significant change in football that will happen in my lifetime,” Riley told fans.

“It’s going to take time for all of us to harness the benefits, to minimise the downsides of it and actually turn it into something that really benefits Premier League football.”

Riley explained to supporters, when looking at how other sports have adopted video technology that it took them all time to harness the benefits of technology. For example, it has taken between five and seven years to get to the levels seen in rugby or cricket.

Last season, PGMOL say VAR corrected more than 100 ‘Key Match Incidents’, averaging three per round of fixtures, and increased the accuracy of refereeing decisions from 82% to 95% from the 2018-19 to 2019-20 season.

Riley said: “That’s a significant improvement that couldn’t be achieved just with humans on the field of play.

“There’s an undoubted benefit in terms of improvement to decision accuracy that leads to a fairer competition overall.”

Supporters at the meeting raised concerns about the unintended consequences of VAR – such as inhibiting goal celebrations on top of the ongoing issues with in-stadium communication of VAR reviews.

John Nicolson, representing Liverpool’s Spirit of Shankly fan group, told the meeting about their recent member survey on VAR. The survey broadly showed Liverpool fans thought VAR had potential but that so far it had had a negative overall impact on the game. “It removes the spontaneous joy of a goal celebration,” Nicolson said.

PGMOL told fans that they are working continually to reduce the impact of VAR on the match-going experience, and have already reduced the time VAR takes to intervene in games since its inception.

Now the average VAR check takes 32 seconds and VAR reviews on the touchline 82 seconds. Riley told fans this averages out to a 54 second delay each game.

“Everyone recognises that it is the longer delays that cause frustration for fans,” Riley said.

“Usually, these are the more complicated situations where the VAR has to look at multiple events. Given the nature of Premier League football these situations can arise.”

PGMOL said they are focussed on continually improving the processes to minimise the longer delays.

“The spontaneous joy question is an interesting one,” Riley told fan reps. “We have seen examples where one set of fans celebrate a goal whilst the other fans are dejected and then, when the decision is reversed, the opposite occurs.

“It’s something none of us experienced before VAR. But we should keep in mind that for over 90% of goals, VAR has been completed before the players have finished celebrating and does not get involved.

“We’ve got to keep working on the efficiency of the process, how we communicate, all those sorts of things and we’ll keep everyone involved in that process as we go along.”

In-stadium communication of VAR has been a sticking point for the technology, which was pointed out by Ciaran Barker from the Wolves Fans’ Parliament – who told the meeting about Wolves’ fans’ experiences with VAR impacting on some of their own goal celebrations and last season’s in-stadium experience.

Riley said, “From the very start of VAR, the Premier League have provided broadcasters with a lot of information, so at least the commentators know what we’re looking at in Stockley Park and they can at least relay that to their audience.

“There’s a lot still to do with in-stadium communication but it’s something we’re constantly looking at. Replays of overturned decisions are shown in-stadium, and we were the first league to do that.”

Riley also pointed to improvements in the big screen messaging, which now include more information about what potential issue the VAR is looking at. PGMOL said VAR interventions still compared favourably to delays caused by substitutions, goal celebrations and injuries.

Riley said: “We understand the frustration of long delays – so we want to have as few long delays as possible and we want fans to understand what it is that the VAR is looking at.” 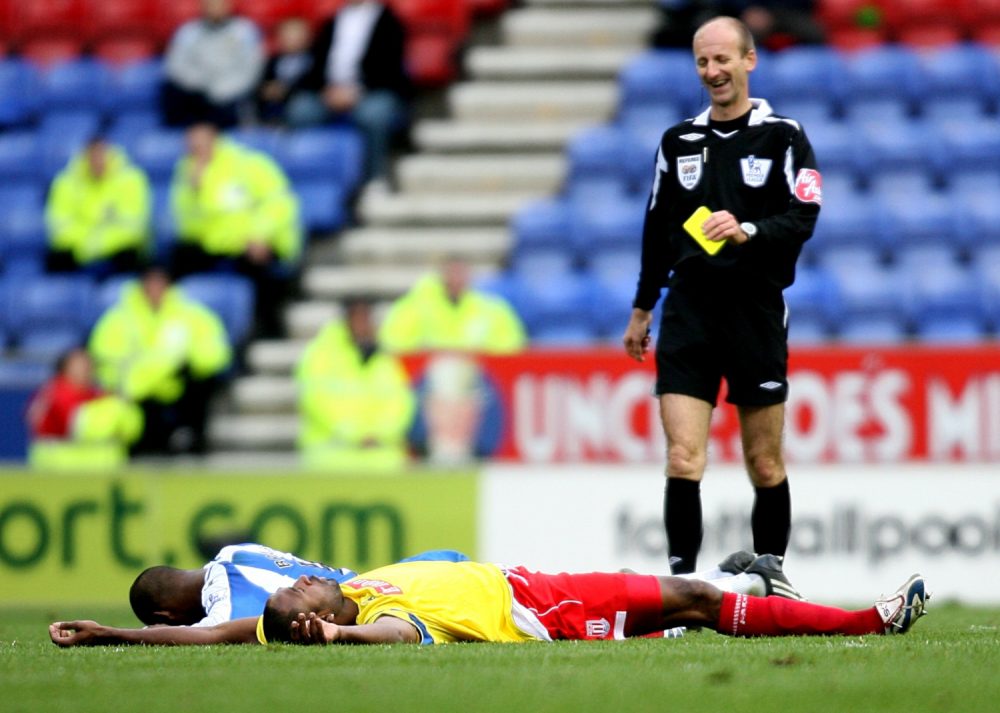 The laws of the game are set by IFAB and the worldwide VAR protocol is administered by FIFA – something which Riley said limits what English football can do with its use of VAR.

“Football’s different throughout the world,” he told supporters. “Even within this country. There are slight nuances for each type of football, but effectively it’s one protocol for all.

“We spend a lot of our time talking to FIFA and other countries, looking at where we’re consistent and inconsistent and how we can improve that.”

Supporters asked Riley whether or not there was any flexibility in how the Premier League interprets the VAR protocol, whether they can deviate from what FIFA require – such as introducing systems seen in rugby where the on-field referee broadcasts decisions in real time.

“It is one protocol for all. We, like other countries, are in constant conversations with FIFA,” Riley said.

“To help those discussions it is really important to understand what all your views are, understand the point of view of the clubs and work with FIFA to shape the protocol so that it benefits Premier League football.

“We’ll keep monitoring how it impacts on the fan experience, speaking as a fan myself – the game is all about the fans.

“We’ve got to end up with a protocol that keeps the vast majority happy, we haven’t lost sight of that.”

VAR – what does the FSA think?

Back at the end of 2020, FSA members had the opportunity to vote on two areas of VAR policy at our AGM.

One was focused on improving communication between the football authorities and supporters, particularly around refereeing decisions and VAR – these conversations with PGMOL are the beginning of that communication.

The second was to create a VAR working group, made up of supporter representatives, to consult more widely on the issues VAR presents, to build FSA policy in this area, and how to improve the use of technology from the point of view of match-going fans.

The international break is in full swing – England’s women drew 3-3 with Belgium last week, and are now preparing in Norway for tonight’s friendly in Bergen. We caught up with Lionesses fan Louise Smith to find out more about what it’s like following the national team, her experiences of the World Cup and how the Lionesses are inspiring a new generation to get involved in the game.