The end of November 2020 sees Manchester City Women’s Supporters Club celebrate its fifth anniversary. It is a milestone everyone at the group is proud of and marks the latest stage of an incredible journey of growth, friendship and camaraderie.

Back in 2015, Manchester City Women were in the first year of life as a professional outfit following the rebranding from the previous incarnation Manchester City Ladies who had been playing continually since being formed in 1988.

Becoming professional, and now playing under the official ‘umbrella ‘ of the club, was generating new interest and with it support.

In 2014 the team were playing at the Manchester Regional Arena, in the shadow of the Etihad Stadium, which lent prestige, and Nick Cushing’s team exceeded all expectations in their first professional season by winning the League Cup in a thrilling final versus perennial trophy winners Arsenal.

All these factors fed into growth and interest in the team.

The crowds were getting larger, and one fan, Sarah Bland took it upon herself to gather some of that support together in her own unique way.

‘Blandie’ decided to take along a small drum and beat it along to some of the better known family-friendly City chants we all knew and loved.

Slowly but surely fans who wanted to create a matchday atmosphere gravitated towards Blandie as ‘Blue Moon’ and other favourites echoed out to the beat of her drum.

The club took notice and soon contacted Blandie with the notion of making it a more official setup.

Manchester City Supporters Club was formed in 1949; it has hundreds of branches worldwide. As well as geographical spread, there are also groups that are designed for specific segments of the supporter base, the LGBT+ group Canal Street Blues being a prime example.

With this in mind the club felt that Blandie would be an ideal candidate for pulling together a Manchester City Women’s branch.

She soon recruited a variety of fans to help her and the branch officially launched and affiliated to the Supporters Club in November 2015.

Since then MCWFC OSC has been at the forefront of supporting City Women, and the vociferous support and beat of Blandie’s drum was soon accompanying City up and down the country week in, week out.

Then as success continued on the pitch the beat was spread to many parts of Europe as the team competed in the Champions League.

That is a potted history of the formation and growth of MCWFC OSC around the actual matchday and support of the team we love, but our OSC has proved to be so much more than that.

From our first official meetings and brainstorming sessions we wanted our supporters club to be one that really valued its members, and one that could really help in all aspects of being a supporter.

We set out a few goals initially: to help all who wanted to get to away games be able to do so, to create a family-friendly social environment away from the games and to put as much back into the game as possible.

The first scheme we pushed as our membership grew was to encourage a car sharing scheme. As many new friendships had struck up it was ideal to fill cars and split costs of travel to games. This worked well, but as numbers rose we knew we had to think bigger. We wanted to provide coach travel to away games at a cost that made it accessible to all.

This was not about profit; this was about getting as many City fans to games and supporting the team as possible. So we knew that if we could generate OSC merchandise, we could plough the profits into subsidised coach travel wherever possible.

We sold match badges, mugs, pennants and calendars and use those funds to run coaches. We started off with minibuses for the longer trips, but these have become full coaches to virtually every game. We have even provided some totally free of charge too. It is an objective we set out to achieve and one we are extremely proud of fulfilling.

Other targets were to support the women’s game in a more general manner. This has included supporting charities close to our hearts such as Manchester City Foodbank and the Darby Rimmer Foundation.

On top of these donations we wanted to sponsor a local girls team to help them develop talent for the future. Again we are very happy to tick this box as the current season has seen us embark upon our third year of sponsoring Tameside United Girls Under-11s team.

They proudly take to the pitch with our MCWFC OSC logo emblazoned upon their shirts, again a great achievement for everyone here at the OSC.

Since 2015 we have invited members to vote for the MCWFC OSC Player of the Season and present them with the engraved trophy and a silver salver.

Away from the matchday activities, we have been proud to represent our football club, our supporters club and the women’s game in general in a number of official functions over the last five years. 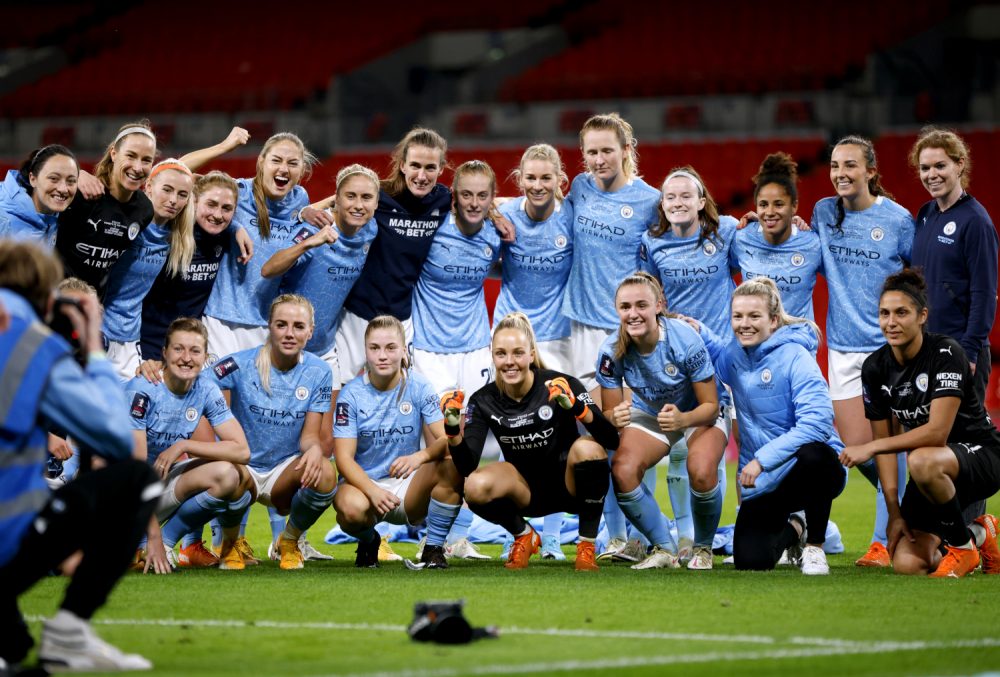 We’re determined to build our support and our OSC – we feel we can do all of these simultaneously by getting information and ideas out there, dispelling myths and answering questions.

Our social media accounts have also reflected a steady growth alongside the membership, with all of our Facebook, Instagram and Twitter feeds busier than ever before.

Indeed given the difficulties that 2020 has brought us all, we feel these accounts are more important than ever in helping members and followers stay connected to both us and the club.

Our supporters club family community also stretches to a considerable social calendar away from the games too.

Obviously these last few difficult months have seen this curtailed, but we will be back and running as soon as it is deemed safe to do so. We hold branch meetings every couple of months.

It gives us the chance to chat City, organise travel and tickets and listen to our members. Where possible we will arrange a special guest speaker and we have had an impressive list of guests over the last five years: Megan Campbell, Lucy Bronze, Neil Mather (City Ladies founding manager and now our branch president), Gary James (renowned City historian), Keira Walsh plus many more.

We have had some very special specific meetings too. One that springs to mind was when we tracked down many former players and coaches from numerous eras to come and celebrate City Women’s 30th anniversary in late 2018. Many members have remarked on what a truly special and emotional evening that was.

We celebrate every Christmas with an annual bash, where members can gather for an evening of festive fun and games usually with a special guest speaker to kick the event off.

Other social events throughout each year have all helped knit us together as a true football family.

It is this community we have built up that is the most rewarding part of our supporters club. Five years ago we were a bunch of virtual strangers to each other with just one main common interest. Now through MCWFC OSC, we are a true family. We celebrate and commiserate together, laugh and cry together and support and help each other just like any other family. This is our strength, this is what we are.

This year more than most, this has felt so vital to us. Being unable to go to games, which we all love so much, has been extremely difficult.

But to know we have all faced this together as an OSC ‘family’, and have been there for each other via social media, video calls, supporting one-another perfectly sums up the resilience built up over the last five years.

The committee of Blandie, Jayne, Jude and myself would like to thank all our wonderful members, friends and followers who have supported us or played a part in our growth these last five years.

We are proud of our OSC – now it is time to look to the future, to returning safely to football and hopefully seeing our wonderful ‘football family’ continue to go from strength to strength.

Watch – Create the space: 100 years on in women’s football

This Sunday (December 5th 2021) was an historic day in English football, marking 100 years since the FA banned women’s football from its clubs’ stadiums in 1921.