On Friday 8th March the Fans Supporting Foodbanks initiative in Liverpool attended the Penny Lane mosque in Liverpool to receive a set of food and other donations that had been made over the past eight weeks.

Fans from the city’s two clubs, Liverpool and Everton, were in attendance, along with representatives from West Ham United’s Independent Supporter Association, in an act of solidarity following the Islamophobic abuse directed at Mo Salah at the recent West Ham v Liverpool fixture.

It showed the very best of the work that fans can do when they come together, uniting not only rival football fans but also local communities and religious groups, work which we commend as part of our commitment to our Fans for Diversity campaign.

Supporters across the country have really picked up the mantle on the issue of supporting their communities – Crewe Alexandra supporters group The Railwaymen launched their foodbank last weekend, and next weekend sees Doncaster Rovers fans collecting at their fixture against Bradford.

Dave Kelly, of the Fans Supporting Foodbanks initiative said “From day one our campaign on social media has used the hashtag #HungerDoesntWearClubColours. Well, it doesn’t have a race, religion or creed either. Hunger doesn’t discriminate, neither do we.

“We are proud of the relationship we have with the Muslim community and share their desire to be part of the wider community.”

Elsewhere on Friday, to mark International Women’s Day, the Fans’ for Diversity team collated a collage of images of women football fans, to champion the contribution that they bring to our grounds and our game, sharing them on social media. 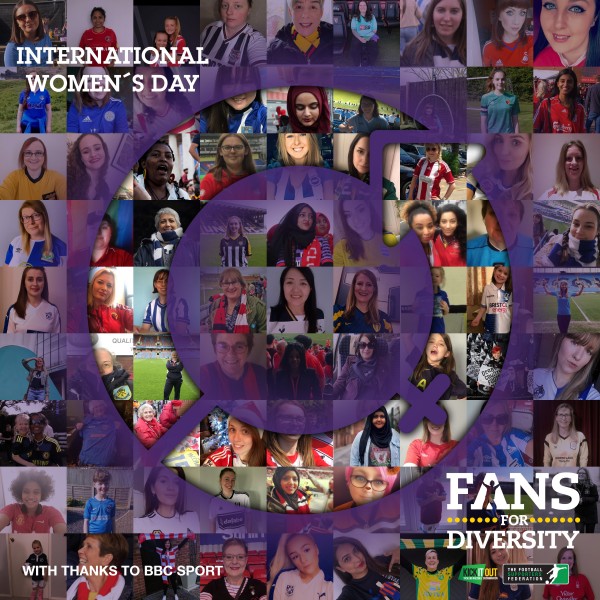 And across the country this weekend fans at all levels of the game were taking part in Level Playing Field’s ‘Weeks of Action’, aimed at raising awareness and supporting equal access for disabled fans at football. Everything from a West Midlands powerchair football tournament to individual fans and disabled supporters associations were doing their bit to champion the cause.

You can find out more about the Weeks of Action here, or by following the #WeeksofAction hashtag on Twitter.

The Women’s Football Weekend is almost here as the spotlight falls on the women’s game this Saturday and Sunday with live games on the BBC, Sky and FA player across the weekend.

Earlier this month, Lewes FC reached the incredible milestone of 10 years’ in community-ownership. To mark the occasion, SD Europe spoke to the football club’s Chair Stuart Fuller and the FSA’s community-owned clubs network manager Richard Irving to dig deeper into this remarkable achievement – an interview reproduced with the permission of SD Europe below…

The FSA is supporting an online workshop looking at the work going on to preserve football’s rich heritage and supporters are encouraged to sign-up.

ENG-ER-LAND is a one woman show, written by Coventry City fan Hannah Kumari, and inspired by her experiences of falling in love with football as a mixed race teenager in the 90s. The play is set in 1997, one year after Euro ‘96, the tournament which defined the football decade in England.