Ajax are to create a safe standing area in the Amsterdam Arena this summer. This makes Ajax the second top Dutch team this year to enhance spectator safety for their standing fans – PSV announced similar plans last month.

The Amsterdam Arena has served as Ajax’s home ground since 1996 and is a 53,000 all-seater stadium. However, as is the case in all-seater stadia in the UK, many Ajax fans choose to stand. This includes the club’s passionate ultras group, VAK410, who have made their home an area on an upper tier.

Ajax now plan to relocate the group to the lower tier where rail seats [below – rail seat area at German club Hoffenheim] will be installed to create a dedicated safe standing area for them, as Ajax Head of Safety, Joris de Lange, explains: 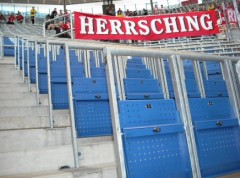 “Ever since we moved from our old ground to the Amsterdam Arena in 1996, there has been a group of our more active fans who prefer to stand. Dutch law does not prohibit this, so standing has been informally ‘permitted’ in some areas. However, the normal seating in those areas did not really make them suitable for standing.

“After the incident at the Ajax vs Barcelona match in 2013, when an Ajax fan was seriously injured in a fall from the first tier, and some other ‘near misses’ up on that tier involving progressive crowd collapse [standing fans falling forward in a domino effect] it became clear to us that this situation had to change.

“We had been looking at moving the active fans from the upper tier down to ground level for some time and then earlier this year the Dutch FA announced that they were planning a scheme to research how they could combine the ‘customer need’ of standing with the objectives of maximum safety and security. This was exactly what we were looking for, so we volunteered to take part.

“After looking thoroughly at the best way to introduce a formal, purpose-built standing area, we have now decided to fit rail seats for safe standing on the entire southern end bottom tier,” says de Lange. Many fans have been standing in this area for the past 15 years.

“In the central blocks, the seats will be locked up within the uprights, as it is obvious to us that fans there will be standing all game during domestic matches. In the blocks to the left and right people will have the option of sitting or standing, as the seats there will not be locked. This reflects the actual situation at the moment, other than that in future the rails will prevent any fans from falling forward.”

Although the club’s evacuation capacity would enable them to increase the number of fans in the stand by about 400, they have chosen to instead maintain their current capacity. “Manageability and safety are our main priority at this initial stage,” says de Lange. There is no specific legislation for stadium design or standing areas under Dutch law so Ajax’s plans meet all the required regulations.

With clubs in Austria, Australia, Germany, Netherlands, and the USA incorporating safe standing areas, many in the Premier League and Football League will be casting envious glances.

That interest will magnify once safe standing areas are introduced into Celtic Park for 2016/17. Why shouldn’t fans in England and Wales be allowed the same accommodation as those north of the border? The ban on safe standing areas in the top two flights is looking more anachronistic by the day.

Brentford, QPR and Wolves are the latest clubs to confirm they will have safe standing areas – and more clubs are expected to follow next season as the Government has confirmed that Premier League and Championship clubs can introduce standing during 2022/23.

Research commissioned by the Government looking into possible reform of the all-seater legislation has concluded that more trials of standing areas in the top-flight are needed.