Wales last qualified for a World Cup in 1958 – the same year the modern hula hoop was invented – but could be heading to Qatar 2022 and taking a new generation of fans along with them in the process.

A place in the finals awaits the Dragons if they get through their World Cup qualification play-off, a decider they are guaranteed after winning their Nations League group.

Following Wales’ impressive showings at Euro 2016 and Euro 2020, a World Cup would further energise and broaden the country’s supporter base according to Jalal Goni, head of Amar Cymru, a new network of Wales fans.

“In most towns and cities in Wales you’ll find some kind of south Asian community,” Jalal says. “And Amar Cymru is all about finding those pockets of people that want to follow the national team whether they’re in Newport, Cardiff, Swansea or north Wales.

“People are keen to follow the team but there are barriers in the way so we’ve been busy joining the dots, providing space for people to start getting together to watch the match.” 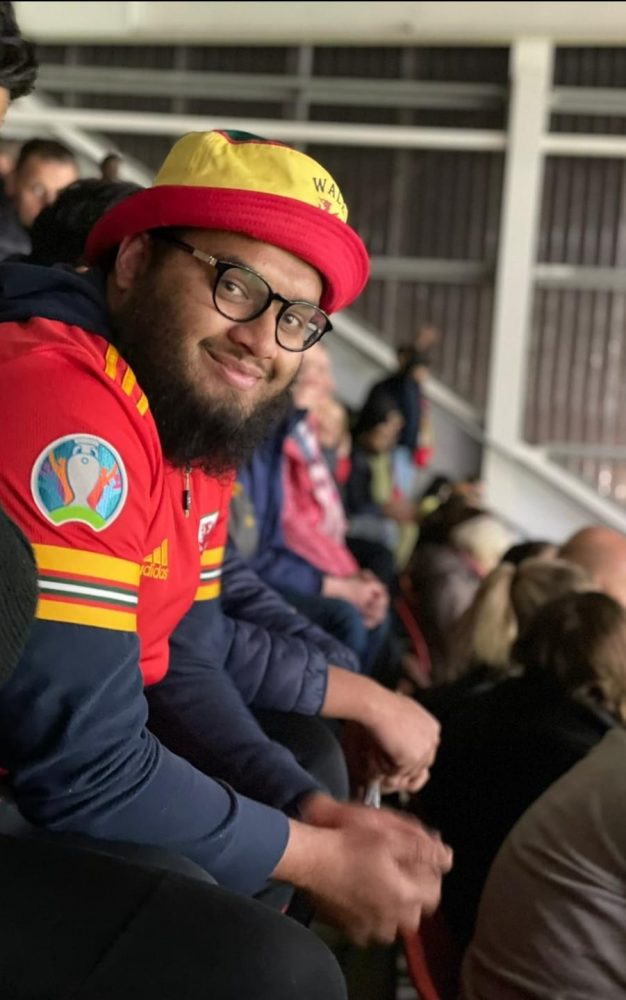 Amar Cymru is a fledgling network of Wales fans predominantly from the country’s growing south Asian community. The Office of National Statistics estimates just over 5% of Wales’ 3.1m people are of Asian descent, and Jalal wants the network to tap into that.

“It started off as just a handful of us but we’ve grown to a network of hundreds all over Wales,” he says.

“We keep in touch on Whatsapp and get together to watch the games in community centres, on digital platforms, Zoom calls or teams, anywhere really where people are most comfortable.

“There are barriers to getting involved in football and starting to follow your national team, so we’ve been focusing on creating that environment where people feel comfortable picking it up.”

Amar Cymru was established last year with support from the Fans for Diversity fund, which is administered by the FSA and Kick It Out. Amar Cymru have used the fund to take 30 fans to see Wales play in the qualifying rounds and arrange a friendly with their counterparts across the border, Amar England. 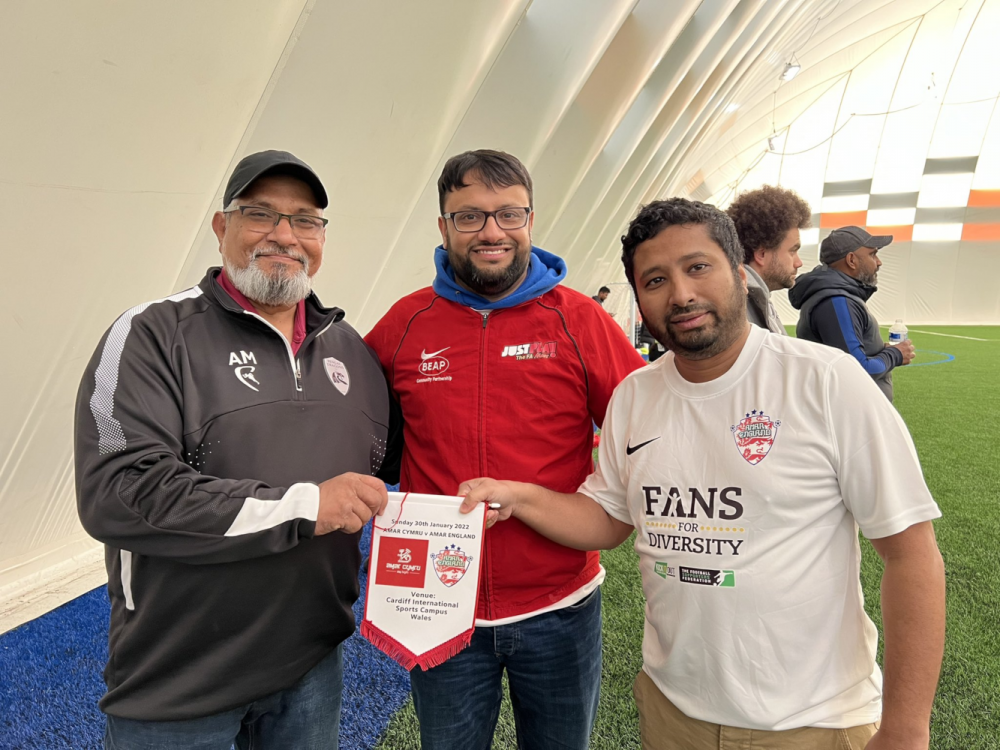 “It was great to connect with Amar England and the CEO of the Welsh FA (FAW) Noel Mooney came down to watch the game between us. It was good to make that first connection with the hierarchy in FAW.

“They’re fully onboard with what we’re doing and we hope the relationship can continue to develop.

“It shows just how much potential there is out there and that network is growing.”

Before helping establish Amar Cymru, Jalal’s work started at Newport County where back in 2016 the Exiles Together fan group was formed, again with assistance from Fans for Diversity and campaign lead Anwar Uddin.

The aim of the group is simply to get people from the local South Asian community along to Rodney Parade to experience live football first hand and dispel myths around the matchday experience.

“There’s definitely a fear amongst first and second generation migrants,” Jalal said. “They suffered a lot when they came here, racism was a real problem.

“Football to them is still associated with the threat of physical violence and hooliganism, and those preconceptions can be carried through families.”

To tackle this, Exiles Together have been working with the club to introduce supporters from the south Asian community to a typical matchday routine and take mixed-aged groups along to their first games.

“The club has gone above and beyond in making us feel welcome,” Jalal told us. “They wanted to make an impact and have made it special.

“Against Boston United they gave us a lap of honour and the crowd gave us some warm applause. Gestures like this make us feel integrated and demonstrate how much football has changed.” 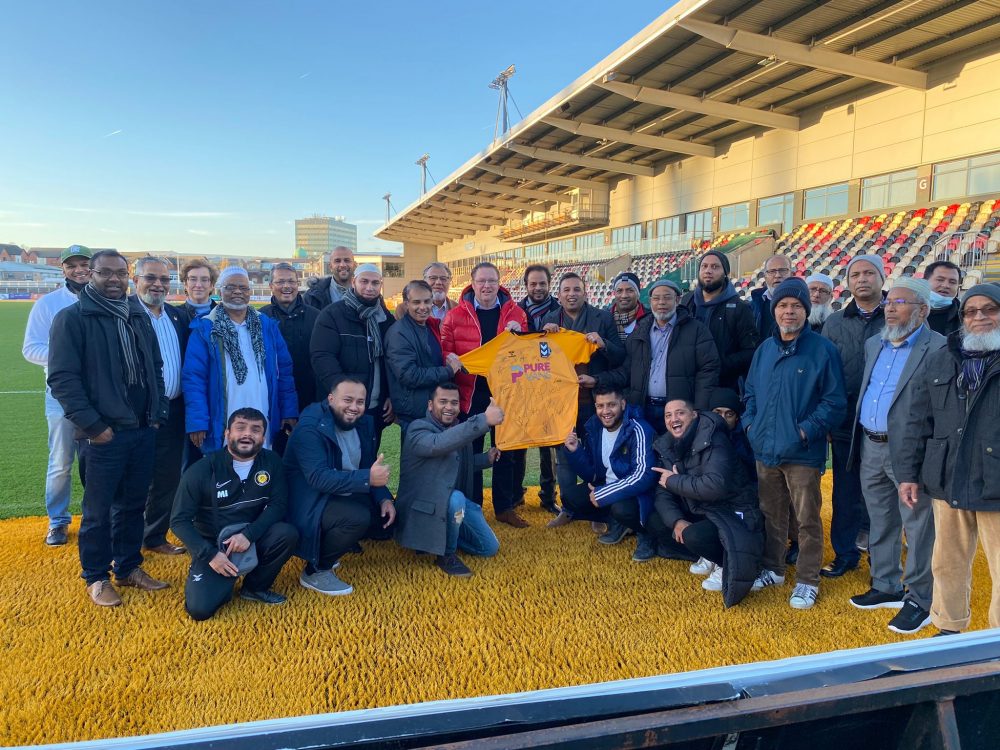 Exiles Together’s work has carried on off-the-pitch too – last week they showcased their My County, My Shirt portrait exhibit and later this year they will be working with Newport County’s foundation, County In The Community, on a Ramadan project in April and May.

Jala said: “It’s been brilliant so far, we’ve made a lot of progress.

“Despite the pandemic we’ve kept going. We have to say none of this would have been possible without the help of Anwar and Fans for Diversity.

New rules regarding the attending of mass events – which includes football matches – come into effect today, and fans aged 18 and over need to be aware of the new requirements under the Government’s ‘Plan B’ for dealing with COVID-19 over winter.

A once in a generation opportunity for change

If anybody had told us that the FSA would end up in a Zoom meeting with the Prime Minister collaborating on what could be done to stop a European Super League breakaway, we probably wouldn’t have believed you.

The North Wales police and crime commissioner Arfon Jones has criticised the use of facial recognition cameras on supporters at this weekend’s Cardiff City v Swansea City fixture, claiming that football fans are being unfairly targeted by South Wales Police.

The use of live facial recognition technology by South Wales Police is unlawful, according to a new ruling from the Court of Appeal which could have significant implications for football fans.