The FSF continues to campaign on behalf of away supporters and we’ll be capturing the away fan experience across the country once more this season.

Our Away Fans Survey gives travelling supporters the opportunity to tell us about their away trips, providing valuable feedback on pricing, access, stewarding and much more.

Last season, Swansea City were the most positively rated host club in the Premier League scoring a solid eight out of 10 (full table below), with Southampton not far behind on 7.92. Reading were rated the best hosts in the Championship.

The London Stadium proved unpopular with visitors to West Ham United – the ground rated the worst by supporters with a score of just 3.74 out of 10. Crystal Palace were second-bottom with a score of 4.44. 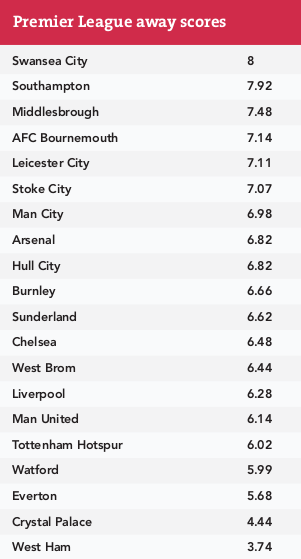 Anonymised data from the survey is shared with clubs looking to improve key areas of their away supporter experience.

Additionally, the data has been shared with more than 50 affiliate and associate members of the FSF to help them learn more about the away end at their clubs.

FSF deputy chief executive David Rose said: “We must say a big thank you to all the travelling supporters who took the time to complete the survey last season.

“We’d urge fans to continue to fill in the survey to help us understand the needs of away supporters.”

Thanks to Tuan Hoang Nguyen for the image used in this story. Reproduced here under Creative Commons license.

The good, the bad and the ugly: Away Fans Survey returns

The Away Fans Survey, the largest ongoing study of the away fan experience in England and Wales, is back again and we're after your help once more.

This summer the European Football Fans’ Congress will return for the first time since the pandemic with the event due to be held in Frankfurt, Germany, from 21st July to 24th July.

The Free Lionesses Fans’ Embassy which debuted at the World Cup back in 2019 will be returning for England’s visit to Northern Ireland next month.