The Football League season starts next weekend and this time of year is normally an exciting one for all football fans.

But for Villa fans beginning life in the second tier, for the first time in 29 years, that excitement has been tempered by the high ticket prices they’ll be facing for away games. First up is Sheffield Wednesday away, who are charging Villa fans £42.

We spoke to David Michael, editor at My Old Man Said, to get a sense of how Villa fans are reacting and what protests are being planned…

FSF: What is the mood like amongst Villa fans faced with paying £42 for an away game at Hillsborough?

My Old Man Said: Well, obviously many Villa fans aren’t happy with the price. If you charged £42 in previous seasons in the Premier League, it would be considered a high price, never mind in the Championship.

Traditionally, there’s a big demand for the first game of the season and it has been noted that the Sheffield Wednesday chairman (who set the price) soon doubled the offered allocation after they saw Villa fans snap up the initial 2000 allocation in a day and saw they could make some extra money.

The Sheffield Wednesday chairman will no doubt argue, ‘well, it’s demand and supply’, but can he really justify a ticket price that is 40% above the Premier League away ticket price cap of £30?

Villa’s away support is one of the best out there and sadly their loyalty will no doubt be exploited by other clubs in the Championship too.

FSF: What were Villa fans expecting to pay in the second tier? What do you think Villa fans believe would to be a fair price?

MOMS: I think you’d be expecting to pay in the region of £20-£30 for away tickets in the Championship. In terms of being a fair price, the situation is now complicated with the £30 Premier League ticket cap and the extra TV money in the Premier League. Championship clubs are more reliant on gate receipts, but charging higher prices leads to lower attendances. It’s a tricky balance.

Certainly the football authorities need to address the increasing gap between the Premier League and Championship clubs as a whole and think beyond just providing parachute payments for those teams who get relegated.

Overall, when you consider that Villa fans will be faced with more away games and tickets prices over the Premier League away ticket price cap, it’s going to work out much more expensive for fans to follow their team away this season, than if Villa stayed up in the Premier League.

So, it’s the fans of Villa and also Newcastle and Norwich, who will suffer the most financially due to relegation – where’s their parachute payments?

FSF: What actions are Villa fans proposing to take on matchday? How can fans contribute to that?

MOMS: It’s important not just to shrug your shoulders and take it on the chin, and mumble about ‘demand and supply’. In the long-term, such pricing will only be to the detriment of the game.

Some Villa supporters have already produced several banners carrying the sentiment of FSF’s Twenty’s Plenty campaign, which will be on display along with our FSF Twenty’s Plenty one.

Also, Villa fans have come up with the idea of wearing robber’s masks at the game (cheap and easy to buy from Amazon and party shops) to symbolise how we are indeed being robbed by Wednesday’s board. 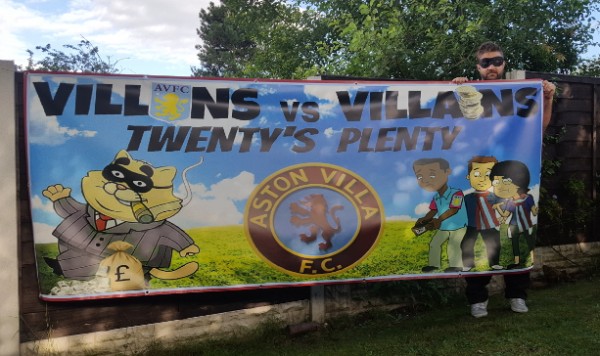 FSF: Sheff Wed fans will be paying similar prices in the equivalent accommodation, do you get any sense of how they feel about their clubs pricing? Have Villa fans reached out all for joint campaigning on the issue?

MOMS: From several Wednesday fans who I have spoken to, it has to be noted they seem far from happy about their own home prices.

It’s important for football supporters of all clubs to realise we’re all in the same boat, and if we come together, like we did with Premier League supporter groups, we can effect change.

Ultimately, and it’s crass to use this terminology, but together football supporters make one big and potentially powerful consumer group to affect change.

FSF: What are the away ticket prices likely to be at Villa Park this season? Are the club looking to reach out for reciprocal deals at all?

MOMS: Well, first of all, credit to Aston Villa for setting up an ‘Away Tickets Consultation Group’ to discuss and explain the issues of away tickets this season. We’ve already had two constructive meetings leading up to this season.

Villa have told us they are actively looking for reciprocal deals across the board this season. As it’s been stressed in these consultation meetings, the club with its dedicated following will be considered a ‘Category A club’ in terms of pricing, so Villa will be seen as a potential cash cow to milk for some Championship clubs. This of course makes reciprocal deals difficult to construct with some Championship clubs that are less fan-centric.

When clubs like Reading have supporter’s interests at heart with their £20 away tickets for visiting fans, I’ve been told they can expect the same reciprocal price at Villa Park.

The good news for Sheffield Wednesday supporters is that Villa have assured me that they will not be forced to pay a like-for-like ‘reciprocal’ price of £42 when they visit Villa Park. Unfortunately though, their club haven’t given Villa any incentives to charge anything less than a standard price though.

Coventry City fans will be demonstrating in London this month to highlight their plight as the club faces homelessness and expulsion from the EFL.

UEFA’s proposals to expand the Champions League have been challenged by fans today, with Football Supporters Europe calling instead for “meaningful reform” to protect the game’s future.

This week marks the 30th anniversary of the Hillsborough disaster – a disaster which claimed the lives of 96 football fans, just weeks after the jury in the trial of David Duckenfield, match commander during that day, was unable to reach a verdict.

Liverpool supporters’ group Spirit of Shankly are backing a new campaign to “rebalance the scales” and ensure truth and justice during future investigations into major incidents.