Blackburn Rovers has become a “toxic brand” for its owners Venky’s, and must be sold as soon as possible according to the Rovers Trust.

Rovers Trust, the supporters’ trust for Blackburn Rovers, are today calling on the owners of the club to officially put the football club up for sale.

Blackburn Rovers fans are becoming increasingly concerned about the running of the club. Blackburn have endured a poor start to the season, currently sitting bottom of the Championship, and attendances continue to fall.

Chairman of Rovers Trust Wayne Wild said: “We are calling on the owners to put Blackburn Rovers up for sale in a professional and public way that will encourage people to think about possible investment in the club.

“Blackburn Rovers has become a toxic brand for the Venky’s, the present situation is clearly not working and they constantly have to fund losses.”

Rovers Trust, established in 2012, has continually called on the leadership at Blackburn to meet with fans to discuss their concerns but the club has refused. In a poll of its membership – 97% of Trust members back calls for the club to be sold.

“We first made our request to talk to the owners, to discuss all the issues that concern supporters, almost five years ago.” Wayne said. “At that time Blackburn Rovers was a Premier League club.

“Today, although it is early in the season, we are already at the bottom of the Championship and the financial situation looks increasingly alarming.” 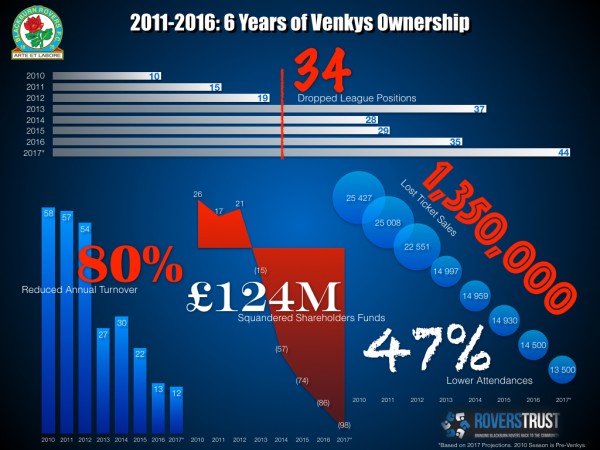 There are also concerns about Blackburn Rovers’ investment in the first team – the Trust claims there is “no sign” money generated from player sales is being reinvested into the playing squad.

Wayne said: “Our founding remit to take a stake in Blackburn Rovers, in whole or part, to help bring our club back into the East Lancashire community remains.”

“Our members – and many Rovers fans – are increasingly looking to us to lead the campaign to remove the owners from our club.”

Earlier this week, the Blackburn Rovers FC Action Group said the current club board were “incapable, powerless or completely absent from duty”. The Action Group is calling for the immediate resignation of the club’s board of directors.

Thanks to Action Images for the picture used in this piece.

Match-day policing under the spotlight

Match-day policing is to come under the spotlight as part of a new research project being run by the EFL and Keele University.

League Two club Oldham Athletic are the latest EFL club facing a financial crisis and supporters say they’re being kept in the dark.