Blackpool fans organise “A Day Of Judgement” (Sat 2nd May)

I wrote a blog on the FSF site back in September, highlighting the dire state of affairs at Blackpool FC. For two seasons running, Karl Oyston, chairman of Blackpool FC, had promised that lessons would be learned, that the club would do a better job next time around. Thousands of loyal fans, wanting the best for their club, were prepared to believe him, more out of hope than any strong sense of conviction. Not any more! Not after another disastrous season on the field and a spate of legal actions brought against supporters.

Voyage To The Bottom Of The League

For many, myself included, Blackpool looked doomed even before a ball was kicked, but when Oyston sacked manager Jose Riga just weeks into the campaign, I was convinced we were down. Relegation has been a long time coming, but the inevitable was confirmed with a whole month of the season still to run. This disgraceful decline is a direct result of the poor management of Blackpool FC both on and off the pitch by the present owners. Oyston is on record as saying we are a “cash rich club” and the “envy of the League”, but to have sunk so low, given where we were four seasons ago, with all the resources at our disposal suggests at best sheer incompetence and at worst cynical mismanagement.

Either way, it’s totally shameful and quite unacceptable. Our recent track record speaks for itself: Blackpool has managed only seven wins in 72 games and has fielded over 50 different players this season alone, many on short-term loans. We could still end up with the lowest points total of any Championship team in history. It is a horrendous time to be a Blackpool fan. The club we love is dying before our eyes and if something isn’t done quickly, then next season Blackpool FC is going to follow Yeovil and continue on its ignominious voyage to the bottom of the league.

Saturday 2nd May – A Day Of Judgement

Everyone, excepting the chairman himself apparently, is of the opinion that this is no way to run a football club. Karl Oyston, currently facing five charges of misconduct by the FA, has been busy in the law courts suing his more outspoken critics and he’s said in response to the current malaise: “Judge us at the end of the season”. We’ve already done that in several ways: thousands of fans are refusing to step inside Bloomfield Road while the Oystons are still in charge; Blackpool Supporters’ Trust (the largest fans organisation at the club) has passed a unanimous vote of no confidence in Oyston’s competency and we are also endorsing an independent candidate in Blackpool South at the General Election (more on that later).

But on Saturday 2nd May, our last home game, Blackpool fans are planning a Day Of Judgement. There will be a number of legal protests outside and inside Bloomfield Road. What’s happening at Blackpool right now could happen at any football club unless the governance of the game improves. Football clubs are social enterprises, not just businesses. Supporters are the heart and soul of football clubs and we deserve better from the custodians of our clubs. We would like to make 2nd May another Fans United Day – and representatives from all the football clubs in the land are invited to Blackpool on 2nd May to join in and give common voice to our concerns. This is our game and we want it back.

In May 2010 Blackpool FC gained promotion to the top flight of English football for the first time in 40 years. It gave a lift to the whole town. The local MP applauded the club for being “at the centre of Blackpool’s aspirations and regeneration plans.” Karl Oyston promised a lasting “commitment to the town and the community.”

Five short years later, all was doom and gloom. Despite nearly £100 million in revenues flowing in from the Premier League, few of the promises had been fulfilled, the club was heading for relegation from the Championship, the local economy was depressed and all the talk was of a legacy squandered. Oyston stated, “We have no big plans for investment in the club”. Supporters questioned where the millions had gone and complained about the lack of ambition, strategy and investment.

Football is big business, but this is about more than business. Firstly, football clubs are community assets and ownership comes with a social responsibility to maintain standards of management and footballing for the benefit of current and future generations of fans and the good of the local community. Secondly, what has happened to the football club is a barometer of what has happened to the town of Blackpool in recent years – the neglect and the under-investment have led to economic decline and severe social issues. Blackpool is now at a ‘tipping point’.

Therefore, Blackpool Supporters’ Trust has endorsed an independent candidate to stand in Blackpool South at the General Election (below). We are doing this to raise the profile of concerns that affect the lives of thousands of Blackpool constituents, whether they are football fans or not.

Key among the manifesto ‘goals’ are issues of:

We are looking to make these concerns prominent issues in the electioneering campaign both locally in Blackpool and nationally. 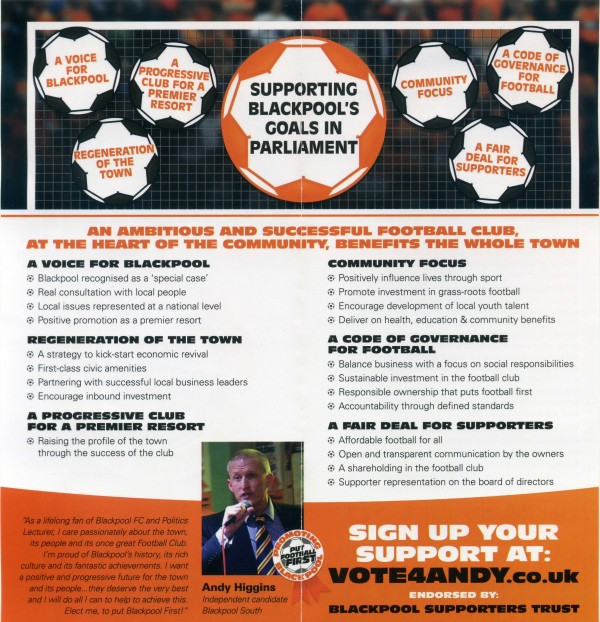 Court paves way for end of Oystons at Blackpool

Blackpool has been put into receivership by the High Court, paving the way for the sale of the club and the end of the Oystons’ ownership.

It’s an activity that plenty of football fans take for granted, but this Saturday many thousands of Blackpool fans will walk through the turnstiles of their home ground for the first time in years. It’s been a long time coming.

Fans set to return to games in May

Yesterday the Government announced that fans will be allowed to return to grounds in May, albeit with reduced capacities.