“Build those bridges, earn that trust” – SLO of the Year Jonathan Waite

While Men’s Player and Pundit of the Year often dominate the media coverage following our annual awards ceremony the event gives us an opportunity to highlight less high-profile work that has huge impact on match-going fans.

One such area is supporter liaison officers (SLOs), still a fairly new addition to English football, who are supposed to act as an interface between football club and their supporters.

Previous winners of the award include Anthony Emmerson at Stoke City and Chris Waters at Sunderland – both of whom are held up as examples of how good supporter liaison work should be carried out.

The 2016 Supporter Liaison Officer of Year is Tottenham Hotspur’s Jonathan Waite, a well-liked figure amongst the Lilywhites of North London.

“It’s an absolute honour and a real surprise,” Jonathan said. “To be recognised by your peers and supporters in this way is very special.”

Jonathan, head of supporter services at Spurs, has demonstrated what impact an effective SLO can have.

Queuing processes at the away end have been improved after Newcastle fans were involved in a crush and he has overseen consultation with Spurs fans over their move to a new ground.

“The supporters’ committee on the new stadium has been a huge area of work,” Jonathan said. “And It’s important for us to be in touch with our supporter base.

“We have to keep them engaged to make sure we get things right, things like pricing for European games at Wembley, to encourage as many to come along as possible.”

Jonathan is particularly pleased with the impact of the club’s supporter liaison work on European away fixtures.

“Unfortunately, there are some countries that still treat English football supporters as if it were the 1980s.

“But the SLO work has allowed us to get good information out to our travelling fans. We’ve been able to build relationships with the host clubs abroad, which has been incredibly helpful.” 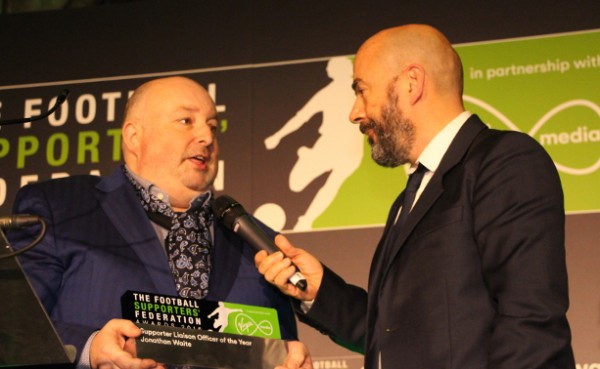 Domestically, Jonathan said the profile of the SLO role is improving but progress could still be made.

“Even at Premier League level there are vast differences in SLO work across the country. The SLO role used to be an add-on to someone’s marketing role, or someone’s safety officer role.

“I was very fortunate at Spurs, it was a natural fit. We were already doing face to face work with fans, in and about the stands on matchday and working closely with the safety officer.

“We listen – supporters know their voices are being heard at the highest level.”

The FSF is keen to promote the SLO role across England and Wales as a stand-alone role not an afterthought as Jonathan alludes to. But what would his advice be to someone who is new to the role?

“Every club has a different climate and different economy. The demands at Bournemouth will be very different compared with Manchester United.

“Clubs have to find out what’s best for their fanbase. At Spurs we have a constructive relationship with our Supporters’ Trust, but that won’t necessarily be easily achieved at every club.

“My advice would be to get out there and speak to the supporters. Build those bridges, earn that trust.

“It gives you insight and a great advantage – if you can demonstrate that, you superiors will definitely take note.”

Thanks to Farand Ngoh for the image used in this article. Reproduced under Creative Commons license.

Voting remains open in the FSA Awards 2019 in association with BeGambleAware, and the Women's Player of the Year is one of the most coveted titles up for grabs. Previous winners include the Arsenal pair of Beth Mead (2018) and Sari van Veenendaal (2016), and Man City's Jill Scott (2017).