Bolton Wanderers and Bury supporters face an anxious wait this evening as both of their clubs face expulsion from the EFL.

Over the weekend administrators at Bolton Wanderers said the potential sale of the club had collapsed due to a dispute involving the club’s former chairman Ken Anderson.

Administrator Paul Appleton said via the Bolton website: “This will ultimately lead to its liquidation, the expulsion of the club from the EFL and the inevitable loss of over 150 jobs. More than that, it will devastate a community for whom the football club is a beacon of hope and expectation.

“I reiterate, unless there is a change of position from any of the parties involved, the process of closing down the club and ultimately placing Bolton Wanderers into liquidation will begin this week.”

Despite the setback, administrators say talks to get the sale back on track began today, but may not be completed in time to satisfy the EFL. If expelled, Bury or Bolton Wanderers would become the first club kicked out of the league and liquidated since Aldershot in 1992.

Meanwhile, Bolton Wanderers’ former players and supporters have been posting on social media throughout the day urging all parties involved in the sale to compromise to secure a deal.

Across the north west, however, the sale of Bury collapsed after potential buyers C&N Sporting Risk pulled out of the deal, citing the timescales and complexities of the club’s CVA.

More than 300 supporters from various clubs gathered at Gigg Lane today in solidarity, cleaning the stands and raising funds, but those efforts might not be enough to save the club’s EFL status. 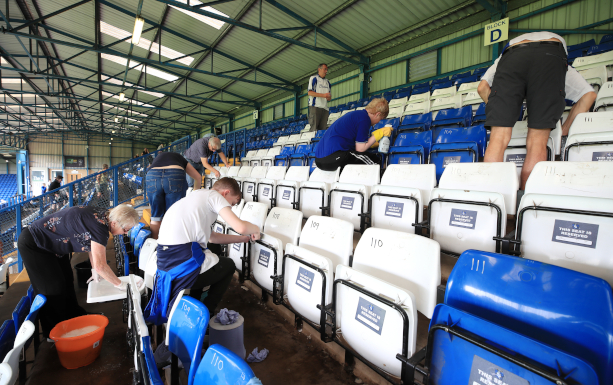 Tom Greatrex, vice-chair of the Football Supporters’ Association, said: “The potential impact of losing a club is huge – not just for the league but for supporters and the town itself, too.

“The protracted crisis around Bury and Bolton shows the regulatory regime is not fit for purpose and it has to be sorted out.

“We’ve put forward a range of proposals to deal with the ownership issues we’re seeing – it’s time for the football authorities to be shaken out of their complacency and show serious engagement with these ideas.

“We can’t have this situation again. An eleventh hour closing of a club is not good for football, for the reputation of the game or those owners who are actually doing a good job.”

The situation faced by supporters of Bury FC is a result of extremely poor stewardship of the club, allowed by the inadequate governance of the game.

Bury FC’s threatened expulsion from the EFL rumbles on and should haunt all fans.