Clobbered: The life of “Category A” fans

The topic of ticket pricing was in the news again this week as Newcastle United fans learned they’d have to pay £52 to see their team at Liverpool on a Monday night as a result of the game being classified as a “Category A” fixture. Match categorisation remains a major headache for fans of many clubs.

Followers of Tottenham Hotspur are all too familiar with match categorisation – their fixtures are routinely set as “Category A” by home clubs, and they end up paying a premium just because of who they support. Tottenham Hotspur Supporters’ Trust have been compiling their away ticket prices this season, and last, to further look at the problem.

To follow Tottenham Hotspur to every game this year is expected to cost you around £860 in tickets alone (full adult prices) – before taking anything else into account, such as travel costs – while following a traditional “Category C” team away to all games, for example Leicester City, will come in at just over £600.

Below you can see Spurs’ away ticket prices compared with what fans of Leicester City pay, at grounds that both clubs have visited, or where ticket prices have been announced: 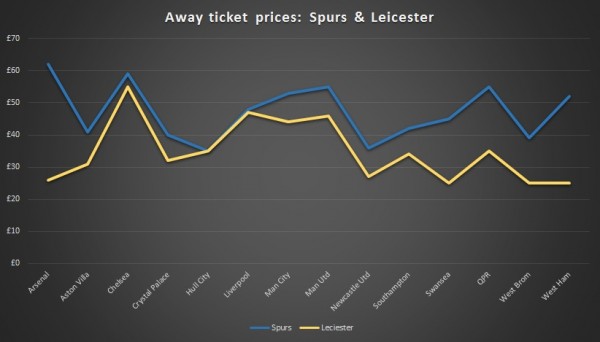 Not a single away ticket for Spurs fans will cost under £30 this season. The cheapest so far are the two north east fixtures at £34 (Sunderland away) and £36 (Newcastle United away). Whilst other teams across the league have some downward movement on ticket prices, albeit sporadically, fans of “Cat A” teams are still being hit particularly hard.

Spurs’ expected average away ticket price of £45 for 2014-15 is more than double what we think is reasonable for away fans – the £20 laid out in our Twenty’s Plenty campaign.

Katrina Law, co-chair of Tottenham Hotspur Supporters’ Trust said: “Arsenal away is always a headline grabber – that’s £62. At any London derby, we get clobbered.

“Fans of a Category A will be paying £300 more for the 19 away games, just because of the team they support.

“Categorisation has been around for too long. We believe it’s unfair and we want to see an end to this.”

You can see below a comparison between Spurs away ticket prices and Swansea City’s: 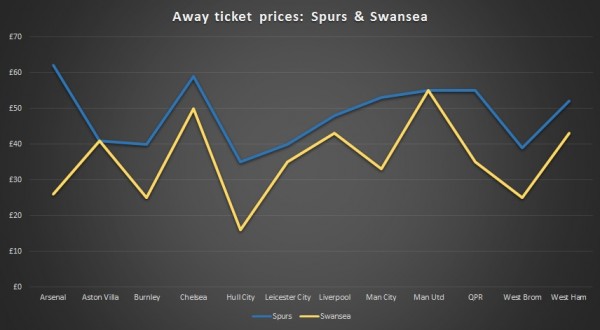 Asked if clubs would respond to the abolition of categorisation by putting prices up across the board, Katrina said whilst current league rules prevent clubs charging away fans more than home fans for equivalent accommodation, this could require a further rule change.

“We are appealing to clubs to end categorisation,” she said. “We hope they wouldn’t use the end of categorisation to put prices up for everyone and would look for an agreement to ensure this wouldn’t be the case.”

One of the biggest ways fans have saved money over the last two seasons has been through clubs negotiating reciprocal pricing deals – which the FSF has highlighted as good practice – but unfortunately, the only example we have identified of reciprocal deals involving a traditional “Cat A” team is Liverpool in 2013-14, agreeing a mutal £10 discount with Cardiff City.

Thanks for Tottenham Hotspur Supporters’ Trust for their help in pulling together the data used in this blog.