Club vs country, the winter break and league reform – what fans think

The Whole Game Solution proposed some significant changes to the English football calendar including the creation of a winter break, moving FA Cup rounds to midweek and restructuring the league into four evenly sized divisions.

Prior to yesterday’s announcement we surveyed 3,200 of our members to gather their thoughts on the ideas within the Whole Game Solution. This provided us with valuable data to present to EFL officials when we met recently with fan reps from across the country.

So, what did fans think about the restructure and reform proposals?

Ian King over at the excellent Two Hundred Percent blog, perhaps summed it up best yesterday when he said: “The Whole Game Solution always felt like a group of potential solutions in need of a group of actual problems.”

The Shrewsbury Town chairman had similar thoughts – what problems were the Whole Game Solution trying to address?

56% of fans said that there was no need to restructure the Football League and the prospect of regionalising the bottom two divisions was also unpopular – with 64% against the idea.

We also asked supporters “Are you in favour of the suggested expansion of the Football League from 72 clubs to 80, or 86 as has been proposed?” 36% said they were against such an expansion outright, while 24% were in favour. The largest group were undecided, 40 % said it would depend on how this expansion would be achieved. 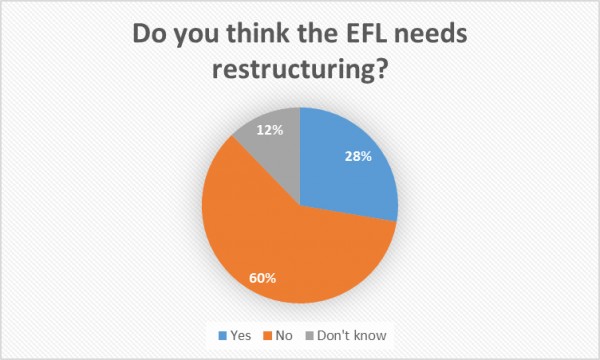 Fixture congestion and the winter break

Fixture congestion is a something that managers and football administrators talk about a lot (but rarely fans and players, strangely). Speaking at our Supporters Summit earlier this year, new Football League chairman Ian Lenagan said: “the fixture calendar is getting worse and worse and worse as we move forward.”

However, Supporters and administrators appear to be on a different page over the issue. When asked “Are there too many fixtures in a season?” 74% of our members disagree with Lenagan and said they didn’t believe this was the case.

Only 11% asked for more midweek fixtures over the course of a season, 25% wanted to see fewer midweek games but the clear majority, 64%, were happy with the current number of midweek games.

Managers complaining about the Christmas fixture schedule is now an annual fixture. Former Manchester City manager Manuel Pellegrini thought it was “incredible” how many games are played here over the Christmas period.

Supporters remain unconvinced, however, and the winter break was an unpopular proposal with most fans absolutely (37%) or broadly (24%) opposed to the idea. 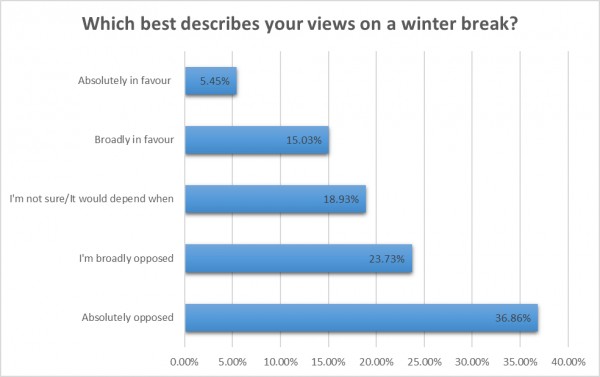 EFL chief executive Shaun Harvey said it was the FA’s reluctance to move FA Cup fixtures to midweek slots that finally brought an end to the Whole Game Solution.

As we’ve already seen there is broad opposition among supporters to a winter break – and that is particularly the case if it meant sacrificing FA Cup weekends. Only 30% of fans would welcome the fourth and fifth round of the competition being moved to accommodate a winter break.

Additionally, a large majority of supporters do not want to see the FA’s flagship competition stripped back and want to see traditional replays remain in place (even 20% wanted a return to the final being replayed!). 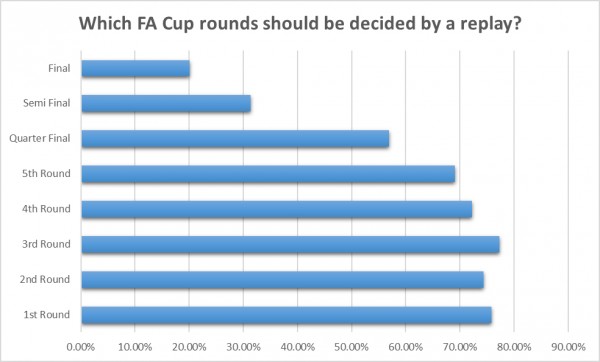 It’s clear that supporters still value the FA Cup; administrators tinker with it at their peril.

A main thrust of the EFL’s argument for reform was to enhance the chances of the England national team at major tournaments.

We asked members how they feel about the national team and the picture is clear – for most fans, it’s club before country.

Just over 22% said “club first every time” and just under 55% said “club comes first, but I’d like my national team to do well”.

A tiny number of those surveyed said “success for my national team is of greater importance to me than my club” (0.90%) and only 1.96% said that country comes first, club second.

But what about those supporters who identified primarily as England fans? Well, they too were largely unenthusiastic about the Whole Game Solution – being split on the idea of a winter break as well as being largely happy with the current number of fixtures and midweek kick-offs.

With the Whole Game Solution proposals now being left behind, it’s clear that such radical changes to the English game are unpopular with not just many fans, but clubs too.

As we said yesterday, such proposals would have significant impact on the English game and it’s obvious that supporters must be included when decided upon changes to some of our most loved competitions.

More than 3,200 supporters responded to our requests for feedback on the Whole Game Solution.

Of those, 55% are season ticket holders at their club. The remainder going to between half and a handful of home games. Most managed to get to a handful of away games each season (33%), the next biggest category manages one or two aways a season (23%).

Thanks to Jon Candy for the image used in this blog. Reproduced here under Creative Commons license.

During this week's international break, former England international David James will be helping football fans across the country overcome their boredom in a bid to stop them making impulsive bets.

An overwhelming majority of fans of non-league clubs are in favour of reforming the voting structure of the National League, according to the results of a Football Supporters’ Association (FSA) survey.