Over the last few years Middlesbrough have had some ups and downs on the pitch, but off-the-pitch they continue to make progress. In part that’s down to the work of Supporter Liaison Officer (SLO) and Head of Supporter Services Yvonne Ferguson and her team…

“Our job is to make and build long term relationships with our supporters – creating memorable moments for them when they visit the Riverside Stadium,” says Yvonne Ferguson, who has been at Middlesbrough for around 25 years.

“We like to focus on fans of the future, so we aim to make a child’s first match memorable as well as retaining supporters.”

The creation of a comprehensive and feature-filled family area is part of the club’s plan to make each stand at the Riverside Stadium feel distinct, with the supporter engagement work being central to that.

“We offer so much more than just 90 minutes of football,” Yvonne says. “In the family stand we provide lots of activities and competitions for kids before the match, all of which link into the school curriculum. So children are learning whilst having fun and visiting the Riverside.

“We also involve children in our pre-match flag parade, flag waving and Play the Player. We have a player at each home game and some lucky supporters get to play the player on FIFA.”

Elsewhere at the Riverside, thanks to dialogue between the club and its supporters, the South Stand is now home to its atmosphere group the Red Faction – giving the group the freedom to make its own displays.

The north stand houses more traditional match-going fans and afterwards the north stand becomes the 12th Man Bar. The west stand provides a number of hospitality seats and boxes – all contributing to each stand having a distinct ‘identity’. 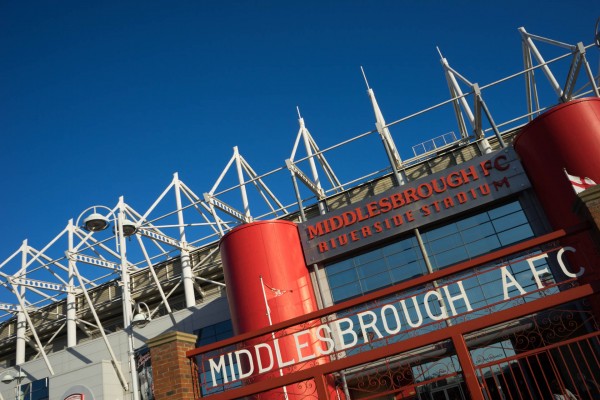 Yvonne, who took up the role in supporter services after moving from HR, says the culture of supporter engagement at the club has been transformed since she first started working at the club.

“I’m very lucky to have an extremely supportive executive,” she said. “They empower us to get on with things.

“We always look to do the right thing, listen to supporters and help where we can. If a supporter has an issue we’ll invite them in for a face to face chat, listen to them and show them what we do.”

Middlesbrough’s engagement culture also stretches to its structured dialogue – holding fan forums four times a year with various supporter groups and monthly with the Middlesbrough Supporters Forum – each affiliated supporters group has a representative attending. These provide a chance for supporters and fan groups to air any concerns and speak to club executives.

“The forums help people feel like they’re part of the football club,” Yvonne said. “We talk to a wide range of fans and supporter groups.

“Like any relationship we don’t always agree, but the important thing is we listen to each other and discuss, but that’s a normal part of a healthy relationship.

“We want supporters to give us their honest opinions, and sometimes you’re going to hear things you don’t necessarily want to hear, but you’ve got to take it on board. This is important so we can continue to enhance the match experience.”

One of the club’s recent innovations has been the introduction of a matchday sensory room, a facility already in high demand. “It’s been a huge success,” Yvonne said. “Some families who have children with autism thought they’d never be able to go to a home match as a family.

“We’ve got staff on hand, television in the room to watch the game or seats in the stadium, ear defenders and tactile objects for young supporters to use.

“The facility makes a whole family visit possible. Families join in our flag parade and flag waving and all receive a medal and goodie bag at the end of the game as well as a family photo signed by the manager and team captain. This is a lovely keepsake of a day they thought would never happen.

“At evening matches we offer the use of the sensory room to organisations that have adults with sensory issues. They also join in the various activities including the flag parade.”

The club plans to expand the sensory room and other disabled facilities in the coming seasons. 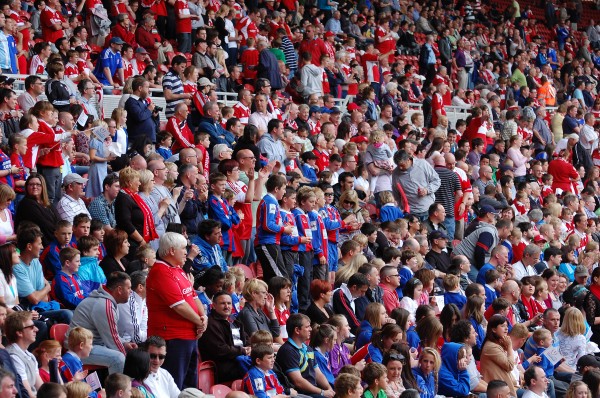 Elsewhere, Middlesbrough’s approach to away fans mirrors the approach it takes towards its regular home supporters too – with the club, like many others now across the country, no longer regarding away fans as an afterthought.

“We want to give away fans a warm welcome,” Yvonne says.

“Before a fixture, we’ll get in touch with the visiting club and ask them to send some merchandise up to us – something like a signed pennant, photo or a scarf.

“Depending on the theme of the match, say around Easter or Christmas, we’ll also have additional gifts to hand out to our visiting supporters.

“Our staff or home supporters will pick out some away fans from the crowd and hand out the gifts. It’s great to see people’s reactions, especially if they’re a young child on their first away trip or if they’ve come a particularly long way. It leaves a great impression.”

“We also send gifts to our opponents for our own travelling supporters.”

Anthony’s good work on Teesside saw him win the FSF’s SLO of the Year award in 2014 and Yvonne has built on that, herself being shortlisted for the award back in December 2017. So what advice would she have for a new SLO coming into the role?

“It’s a really enjoyable and rewarding job,” Yvonne said. “You can make a real difference to supporters’ match experience.

“You need to treat people like you would like to be treated, have patience and empathy. Excellent customer service is vital too.

“Contact other SLOs and ask for advice and share ideas – if we continue to do that we will ensure that the match experience for supporters continues to get better.”

Thanks to PA images, Paul Hudson and Steenburgs for the images used in this blog.

Sustain The Game: fan engagement proves its value at Stanley

Every week we’ll be looking in more detail at one of our Sustain The Game! key principles and this week it’s supporter engagement. We believe fans are the lifeblood of the game, they need a voice in their clubs and on all issues that affect them and their communities.

The Government’s fan-led review of football is underway and, yesterday, its chair Tracey Crouch MP and panelists met with supporter representatives from the FSA’s Championship Network.