Former-PA reporter Ken Gaunt revisits Salisbury FC, and talks to the secretary of the Supporters Club about her unusual mode of transport to away games…

She is the secretary of ambitious Salisbury FC’s Supporters Club – and a grateful mum on a mission.

Michaela Menzel is cycling to all the team’s away games this season, not just to enjoy the match-day atmosphere but to raise funds for a childrens’ charity. 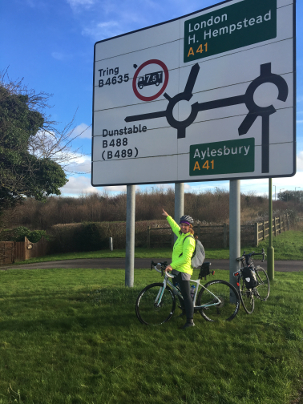 That includes FA Vase ties – which could see the phoenix club arrive at Wembley – and has already included long-distance trips from the heart of Wiltshire to Dunstable and most recently 125 miles to Nuneaton.

Michaela is indebted to the staff of Salisbury District Hospital and keen to help out financially, explaining:  “My son Ryan was not breathing when he was born. If it hadn’t been for the Neonatal Intensive Care Unit he wouldn’t be here today.

“Tim Eagles, who accompanied me on the last two rides  to Dunstable and Nuneaton also has personal experience of his son having been in the NIC unit.”

And Michaela finds she is among friends when she arrives. Despite playing in the fifth tier of non-league football, Salisbury take around an astonishing average of 300 fans with them on the road.

Under the stewardship of manager, TV pundit and ex-pro, Steve Claridge, they  will entertain Ashford United in the quarter finals of  FA Vase – and are also on course for promotion from the Sydenhams Wessex League.

Michaela says: “We have raised roughly £730 including gift aid. Hopefully our efforts also help to raise the profile of the new Salisbury FC a little.

“The total distance I’ve covered so far is just under 600 miles with 300 miles left to do for league matches and obviously the possibility of further away matches in the FA Vase.”

Gemma Heath, fundraiser for the Stars Appeal, says: “We are delighted that Michaela is supporting the Stars Appeal Little Lives fund (Neonatal unit) through her tremendous efforts.

“Support for the Stars Appeal Neonatal Unit, for babies born too small, too sick, too soon, helps provide state-of-the-art treatment and diagnostic equipment to help staff deliver the best possible care to these fragile young lives.

“It also enables us to continue to provide family accommodation, so that parents can stay free-of-charge whilst their baby is in NICU. Our thanks to Michaela and best wishes for safe cycling!”

Michaela Menzel is raising money by cycling to all Salisbury FC away matches for Little Lives Stars Appeal. www.justgiving.com/micha-sfc

#ICYMI One in a thousand

Sergio Reguilon probably wishes games were still behind closed doors, as 10,000 Spurs fans were there to witness this particular clanger at the weekend. Not only did it contribute to his side’s 2-1 home defeat, but it was also the 1000th own goal in Premier League history. Quite the way to bring up that particular landmark, and nice to be the answer to a pub quiz question for years to come…

The latest phase of the decades-long safe standing campaign began this week as trial areas saw their first official use in the Premier League.

Chelsea sale should see supporters given a stake in their club

Roman Abramovich’s enforced exit brings a unique opportunity to embed supporters at the heart of one of our most successful clubs. Tim Payton (Arsenal Supporters’ Trust) calls for the Government to do just that at Chelsea…