FSF National Council member and Arsenal fan Steve Powell has been a wheelchair user for nearly four years now. Things are better than they were. They’re still a long way from perfect on Planet Football though. Steve tells us more…

With the current debate over disabled access in the Premier League it’s a good time to look at where we were, where we are and where we ought to be. First the good news. Most clubs are better than they were on disabled access. That wouldn’t be hard.

When I started going to football in 1968 disabled access was simple. It didn’t really exist.

You might see the odd “cripple” in a wheelchair, usually getting drowned when it rained down on the perimeter track around the corner flags.

lf they were an away fan or lived a long distance from their club travel could be a nightmare.

For wheelchair users train travel meant disabled apartheid in the guard’s van. Coaches weren’t adapted for those with mobility difficulties. Local buses didn’t “kneel” nor did they have ramps. If disabled fans drove to the game disabled parking was hit and miss. If you needed the khazi you could be in real trouble. Disability adapted toilets were few and far between.

As for those with “invisible” disabilities like diabetes and Multiple Sclerosis (MS) the situation could be dire.

A friend of mine was dragged out of the back of a parked car by a policeman near the Hawthorns in 1976. He was accused of being a “druggie”. He was and still is an insulin dependent diabetic. He was injecting insulin not heroin, the guardian of law and order didn’t have the grace to apologise when shown proof.

Fast forward to today and the situation is much better though patchy.

There’s still a long way to go. A quick thought experiment. If your club had a policy that all black or all gay supporters could only watch the match from certain areas of the ground, would that be OK with you? Assuming that you’re not a headbanging homophobe or racist (in which case you probably aren’t reading this) then the answer will be “no”.

That however is the situation for many mobility-impaired supporters. With some honourable exceptions like Swansea City most wheelchair spaces for away fans are at pitch level with obstructed views. The situation is the same for too many home fans. Like it or lump it. At some grounds refreshment facilities are inaccessible. 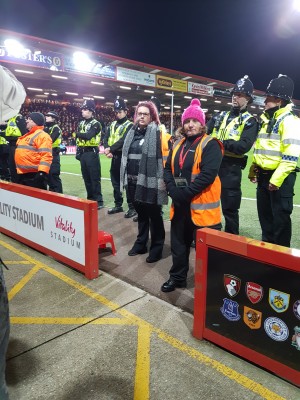 It isn’t all about money.

Neither have I got a ticket for our Premier League game against West Bromwich Albion at the Hawthorns. We only got six wheelchair spaces for that game.

The difference is Sutton United is in the National League and runs on a shoestring budget. Gander Green Lane has a capacity of 5,000. The Hawthorns holds nearly 27,000. The Baggies are in the Premier League. They’re rolling in money. Granted FA Cup regulations require fifteen percent of tickets for the visitors whereas in the Premier League it’s five percent or three thousand whichever is less.

Some have the will despite having little money. Others are loaded but can’t be arsed.

There are around 1.2 million wheelchair users in the country, two-thirds of them use their wheelchairs every day. That’s one in every 83 people. Then there are the needs of blind and deaf fans, supporters with learning difficulties, those on the autistic spectrum, those with invisible disabilities. lf football is the people’s game it needs to be for all the people.

Stewarding that needs improving too. Only recently stewards at Old Trafford refused to allow mobility impaired Arsenal supporters keep their mobility aids (walking sticks and crutches) once seated at Old Trafford. They were “offensive weapons” apparently. They had to ask for them back to go to the khazi or get a beer or Bovril at half-time. Demeaning much? Never mind that such discrimination is unlawful under the Equality Act 2010.

There’s a big job on getting the game to where it needs to be.

It’ll need mutual empathy and solidarity between able-bodied and disabled supporters, especially where able-bodied fans are displaced from their accustomed perches to enable improved access. What’s needed is the will. Let’s do it!

Around a third of disabled supporters say they have been put off going to the match according to a new national survey of disabled fans.

Research commissioned by the Government looking into possible reform of the all-seater legislation has concluded that more trials of standing areas in the top-flight are needed.

Forget Christmas – those with a nose for finance look forward to the release of Deloitte’s annual football report like no other day of the year. Ashley Brown, the FSA’s head of supporter engagement and governance, has been up since the early hours flicking through its pages. Here are his highlights…

The Afghan women’s development football team and their families have arrived safely in the UK having sought here following the re-establishment of the Taliban’s regime in Afghanistan.