Diversity in action in the national game

It can sometimes feel as if the top tier of football is just engaged in debate in the media or in meeting rooms about what to do about discrimination in every aspect of the game; but there are thousands of active supporters and clubs at all levels trying to make a difference. That includes sparks of activity in the National Game too, thanks to the Fans for Diversity campaign.

The campaign, funded by those top tier orgnaisations, brings together Kick it Out and the FSF and strives to show the positive difference supporters can make in tackling issues which are blighting the game. It might seem like a small effort, but together we can set the tone of how we want football to be.

The past weekend has seen community days at both Whitehawk FC in Brighton and Boston United FC – both clubs are committed to engaging with their local community and promoting inclusion. 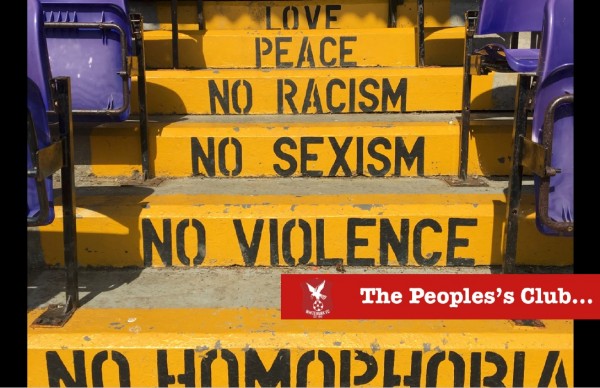 Supporters group the Whitehawk Ultras have been instrumental in setting out the club’s ethos around anti-racism and discrimination of any kind at the club, which is best summed up on the steps inside the ground. The club’s commercial director Kevin Miller is also pushing forward in ensuring the community around the club knows it’s a welcoming place for anyone to enjoy live football. The community day brought in local youth teams and older people to promote healthier lifestyles and social opportunities.

Boston in Lincolnshire has a significant population of Eastern Europeans and as part of the community day supported by the Fans for Diversity campaign the children from the Polish school in the town were invited to the game with their families. The children attend an extra half day at school on a Saturday to learn about Polish culture and the language. For many it was their first live football match and the Pilgrims not only delivered a goal in the first minute but a fabulous 4-1 win and a great family day out, with a free fanzone and family activity area for everyone. 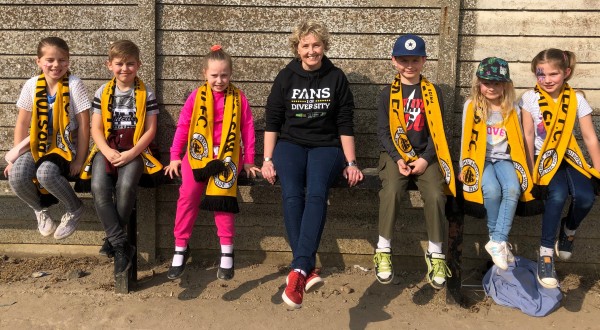 Looking ahead; the well established ‘Daggers Against Racism’ day takes place this Saturday 6th April when Dagenham & Redbridge FC take on Barrow FC. Both teams will warm up in club ‘Fans for Diversity’ t-shirts to promote the message of inclusion and to take a stand against discrimination. We have also linked up with the Barking & Dagenham Youth Forum, elected active young people representing their diverse local area.

A welcome event earlier this week was for many their first visit to their local club. They’ll be attending on Saturday to support the club and it’s hoped it will build a future relationship where they can collaborate with the club and the Community Trust to make a positive difference to football and their community.

Supporters of any club can contact the Fans for Diversity campaign to find out how they can help tackle discrimination in the stands and to make the game we all love welcoming and inclusive for everyone. Email [email protected] or [email protected]

Thanks to Maria Horner and JJ Waller for the images used in this blog.

TIME FOR ACTION: Sustain The Game!

Sustain The Game! is the FSA’s campaign to persuade the football authorities to take measures to protect the existence of our clubs – and it’s more important than ever with so many under threat because of the financial strains caused by COVID-19.

Fan groups across the women’s game have written to their clubs and football authorities to highlight the growing problem of fixture clashes with men’s football.

Following the meeting of the National Game Network which took place in London on 7th March, the minutes from the discussion are available to download now.

The National Football Museum has launched a nationwide search to unearth the best football stories and memories from fans throughout the country.