Fans for Diversity’s Football Voices: “This is nothing like what I’d been told”

These stories may not be common, they’re certainly not what most football fans experience but they do offer an insight into why some people may not have done what most fans can do without a second thought: buy a ticket and head off to the match.

I came to football late in my 40’s and I’m not alone. I had been saddled with that perception; decades of a negative narrative about football which made me assume it wasn’t something for me.

As part of our #FootballVoices feature we’ve spoken to two women from different cultural backgrounds about their burgeoning football lives.

The first is Samsun: a working mum of two living in Bradford. From having zero involvement in football in the past eighteen months she has become a qualified coach and referee at grassroots level and runs Bradford Allstars FC girls’ team.

The second is Delores who moved to the UK from Zimbabwe in 2004. She’s a working mum of one and has been a season ticket holder at Lincoln City since 2012.

Both were kind enough to chat to me about their experiences at the match.

Maria: Can you describe what role football had in your childhood?

Samsun: Before the age of thirteen I didn’t know football existed! I have two brothers, they played football. I used to moan about the expense of their birthday presents – so expensive to put a name on a shirt!

I really had nothing to do with football – girls in my Bangladeshi Muslim community were discouraged from being physically active. We lived near Valley Parade and there was anxiety about football fans.

As kids we were told not to play out when they arrived on a matchday. I used to ask ‘Why though?’ I was told it was dangerous, they could attack you! It was ingrained to think like that.

As I got older things started to change – nothing bad ever happened. My brothers played football with their friends and over time my parent’s mindset gradually changed.

Fans used to park in the streets around the ground and I do remember my mum used to look out for them, to try to stop them getting a parking ticket. 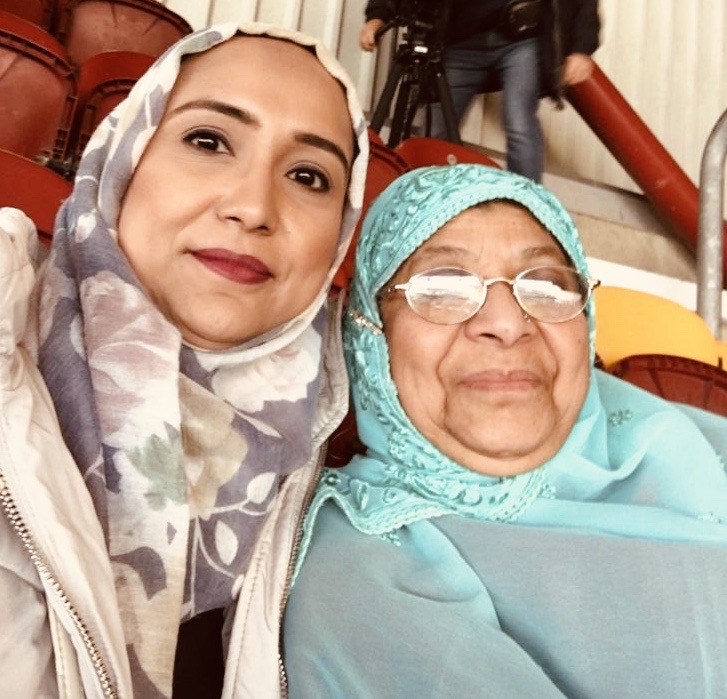 Samsun (left) with a first time match-goer at Valley Parade.

Delores: I have such special memories of me and my dad watching football together on TV, just me and my dad, my brothers would sometimes join us.
It was the only football available to me in Zimbabwe. In the height of winter with the fire on we cheered Liverpool, there was so much laughter and it also meant I could stay up late!

Maria: Did you have kits, scarves or other football merchandise?

Delores: Unfortunately, it wasn’t possible then, you couldn’t really get hold of it and if you could it was just too expensive, very few people had things like that – so it was just TV.

Maria: Did you ever imagine going to game?

Delores: No. I never thought it would be a possibility.

Maria: So what changed to get you involved in football today?

Samsun: My son plays football and I take him to his matches but I’ll admit I used to be on my phone most of the time.

A couple of years ago our community group in Bradford was part of a fan exchange with the Bangla Bantams Lady Imps from Lincoln City. I wasn’t interested in football, I thought it was boring honestly, but I was amazed that there were really nice people involved in the game.

After a while I made a friend when watching my son train. She used to cheer my son while I sat quietly and I thought maybe I should do that – so I started watching his training sessions and encouraging him. At a new weekend session I offered to do their admin and then my friend pestered me to go with her to train as a football coach and as a referee!

I was really surprised at the referee training – it was mainly teenage girls, my friend and me – we were like their mums!

What’s great is that they teach you about the game from the beginning. I love studying so I really enjoyed it. The practical was scary and it was the first time I’d ever worn football boots.

The coaching course was amazing, I thought there might be issues with me being an asian muslim woman in a headscarf. Our small group had to plan a passing session. I spoke first, they weren’t sure but we were able to break the ice – they accepted and respected me.

Delores: I came to Lincoln so I could be near my mum. My son loves football and I remember around 2012 my son came home excited because his headteacher, whose son was a Lincoln City player, had given him tickets to a game.
I said to him ‘We’re not going!” He was so upset.

Maria: And why wouldn’t you go?

Delores: It’s hard to explain. The fear growing up, especially in Zimbabwe, it was ingrained, you don’t mix with whites.

It was difficult in our family as we were not accepted by the white or the black community. Although I was old enough to think that this is not acceptable.

It was an emotional response; white people go to football. How are they going to react to us being there? What is going to be said? My gut reaction was to protect my son from anything negative.

Then I thought if we go, he may have a different experience growing up. He has to learn how things are in life. He must also know not everyone is like that. So we went. 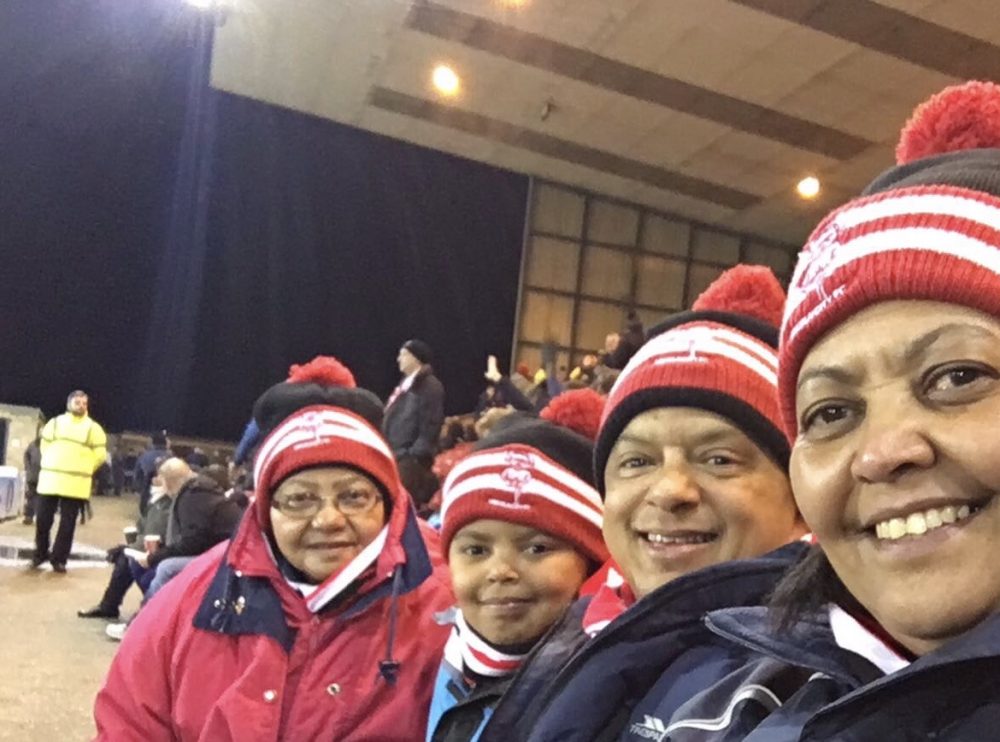 Delores (far right) with her family at Sincil Bank.

Maria: What were your first impressions of the match?

Delores: We were very very anxious walking to the ground. We sat at the very top of our stand.

There was no one else near us – very few fans at the ground compared to the crowds now. That made us feel better, not that it should have!

I’ve always felt safe here. We kept going. Me, my husband, my son and my mum. She loves it. Even if I say “Mum it’s a cold night game” she insists – “Just get me a ticket” she says!

Samsun: I’ve been to games at Bradford. The first time I was apprehensive and anxious about going because of all those things put in our childhood minds; hooligans and violence.

I didn’t necessarily believe it, but because I’d never been I had only seen what was on the news. I thought “what if something happens and all these fights break out?”

Anyway, it went smoothly and as soon as I got through the gates, wow! The atmosphere was electric. I loved it. I thought this is nothing like what I’d been told. The fans were brilliant. I had samosas and pakoras. I shared.

I then went with a lady in her 60’s who’d never been to a football match. I could explain to her what these people were doing, the referees and so on. She really enjoyed it once I explained.

Understanding the game is what is lacking in our community – they think it’s just for boys. That needs to change.

Delores: Things are getting better, when we started going we didn’t see families like us, but now there are definitely more people from different backgrounds at Lincoln City games.

While I’ve never experienced any negative issues at Sincil Bank what is awful is that I have heard racist words used to abuse our own players, but only ever at away games.

I have always commented on it. My family sometimes tell me to keep quiet but I’m not going to.

I’ve seen the reaction of players, their heads drop. It’s important we’re having this discussion.

Samsun: Things are changing – sexism can be a problem in the asian community so more needs to be done for girls.

The club I coach with, Bradford All Stars is quite diverse among the boy’s teams but in my girl’s team we don’t have girls from the Bangladeshi community.

Their families say “no we don’t want to send her, she’ll break her leg!” I tell them kids can break their legs anywhere!

We need to do more to encourage girls to watch and play. They can develop important life skills; patience, confidence and leadership.

Maria: Thank you both!

The FSA and Kick it Out would love to see you at the Fans for Diversity Conference on 20th September, an afternoon celebrating fans who make a difference in the game, so get the date in your diaries.

This month will see the first ever Fans for Diversity Awards presented at our conference on Friday 20th September, organised with our partners at Kick It Out.

The winners of our first Fans for Diversity Awards were announced today, celebrating the work that individuals and fan groups do throughout the football pyramid and across the country.