The season’s back up and running and some things never change. You probably will concede that last minute equaliser, early season optimism will evaporate and the temperature of your half-time cuppa will rival that of the Sun’s surface.

However, some things do change and it’s not always to fans’ liking. 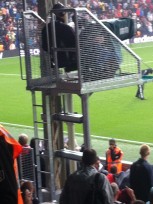 In the past few days we’ve hear from a number of fans of Premier League clubs – sitting in the away end at Arsenal and home end at Craven Cottage (see left) among others – who say that their views were obstructed by newly erected camera positions.

Credit to Fulham who responded swiftly to feedback from fans sitting in the Johnny Haynes Stand. The club’s Supporter Liaison Officer said they have shared feedback with the Premier League who will meet broadcasters next week to search for a “viable alternative solution”.

Some Manchester United fans had similar complaints last season thanks to the installation of 3D TV cameras and subsequent removal of season ticket holders to different – and more expensive – parts of Old Trafford.

Has this happened to you?

That’s not to say the problem is limited to top-flight clubs. You might be a fan at a Football League or Conference club who has found your once glorious view blocked by a cumbersomely placed TV camera.

Whichever division, the Football Supporters’ Federation would like to hear from you as it’s something we’re happy to speak to the authorities about.

Fans pay good money to watch their team and they shouldn’t miss the action for the sake of TV getting a slightly better angle on a slow motion replay.

What do fans want from a return in the women’s game?

The FSA are gathering the views of fans of women’s football across the country on how they believe football can safely return from its COVID-19 suspension with spectators in the stands.

Women’s football: Nine out of 10 fans will return

Nine out of 10 fans in the women’s game say they will return to watch live football, according to a new survey by the Football Supporters’ Association (FSA).