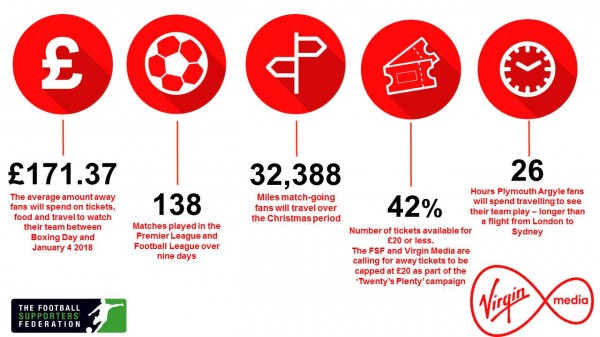 Cost of supporting your football club away over Christmas revealed

Plymouth Argyle fans face the highest cost and most arduous journeys to watch their team over the festive period. This is according to annual research carried out by the Football Supporters’ Federation (FSF), and supported by Virgin Media, into the cost of Christmas football.

The analysis includes ticket, travel and food costs, plus journey times, incurred by supporters of all 92 clubs across the Premier League and English Football League for festive fixtures played between Boxing Day and January 4 2018.

The findings show that Plymouth Argyle fans will spend £468.43 – 11 times more than the lowest costs paid by Morecambe FC fans (£42.89). The Pilgrims will travel more than 1,000 miles to get behind their team at MK Dons on Boxing Day and Blackpool on December 30.

Overall, the average fan will spend £171.37 to watch their team this Christmas, where supporters of 46 clubs will travel twice to support their teams away. In total, Premier League fans will pay the most (£182.08) to watch top-flight football over the Christmas break.

On top of costs, some fans will have to travel huge distances to attend games across the country. Total distances that will be travelled range from 20 miles (Chelsea away at Arsenal) to 1,096 miles (Plymouth Argyle at MK Dons and Blackpool) taking between 1hr 41mins and 26hrs 47mins respectively.

The findings underpin the FSF’s Twenty’s Plenty campaign, backed by Virgin Media, which calls on clubs to cap the cost of an away ticket to £20.

“Despite money being tight around this time of year, supporters will be travelling up and down the country over Christmas and New Year to back their teams in remarkable numbers once again.

“Away fans are a huge part of our match-going tradition and that shouldn’t be taken for granted, so clubs and sponsors can and should do more in making football as affordable as possible.”

As the official shirt sponsor of Southampton FC, Virgin Media is on the side of fans this Christmas by subsiding Southampton supporters’ coach travel and match-day tickets for the Saints’ game against Tottenham Hotspur at Wembley Stadium. Crystal Palace fans visiting St Mary’s on January 2 will also have their tickets subsidised to £20 as part of Virgin Media’s ongoing cap on away ticket prices at the stadium. 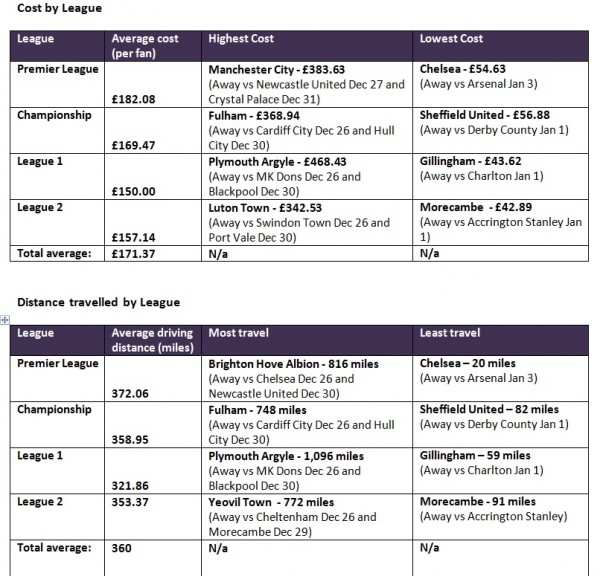 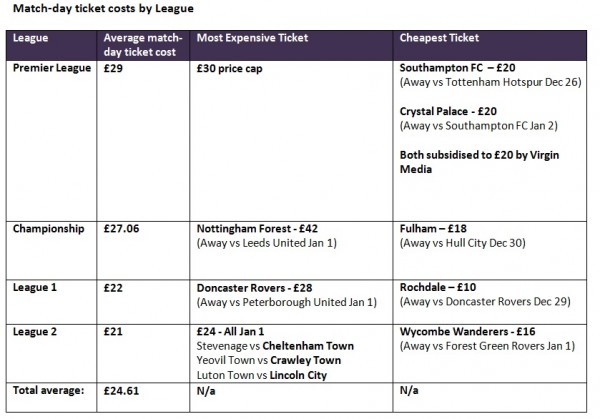 Liverpool and Tottenham Hotspur fans have condemned the cost of attending this year’s Champions League final – as the costs of travel, accommodation and tickets reach record highs.

EFL to broadcast all matches while attendance restrictions remain

The EFL have agreed a “flexible framework” with Sky Sports, to allow all EFL games not already being televised to be streamed online via its iFollow platform.

The leader of the All Party Parliamentary Group for Football Supporters is calling on fans left out of pocket by the latest TV fixture changes to be compensated.

Bristol City supporters have set up a crowdfund to help young fans hardest hit by the club’s rise in season ticket prices.