Following Chelsea on the football specials… 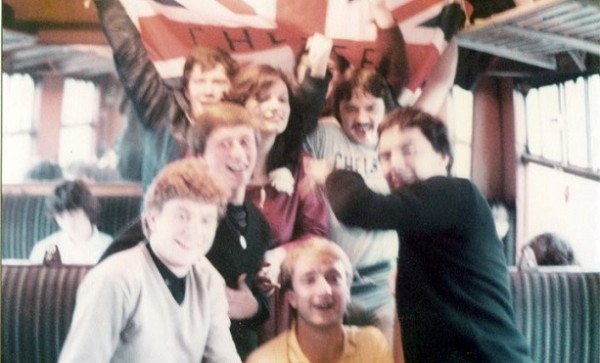 A few weeks ago FourFourTwo asked us about football specials in the 70s and 80s. We spoke to members about their experiences from “back-in-the-day” and Catherine McDonnell (above, centre) had some great stories from her time following Chelsea around the country…

My first trip on a Chelsea special was in September 1977 at the age of 15 when I made the first of my 38 visits to Old Trafford. I told my parents that I was off to meet a friend and we were going out for the day with her parents and I would be back at 9pm.

Little did they know.

I made my way from my North London home to Euston and boarded the rather aged, filthy train which had a damp aroma. I think the fare was around £4. I proudly wore my blue and white scarf, joined in on the conversations, and noticed the train stopping for ages at stations to let ordinary service trains go through.

After what seemed an age, we finally arrived in Manchester, and at the ground late, to find that we had missed Bill Garner scoring what turned out to be the only goal of the game. How frustrating. But I was to find out this was a regular occurrence…

After saving up my Christmas, birthday, and pocket money, I soon became a regular on this mode of transport from 1978. Being one of the few females to travel, it was not long before I made friends with others and we arranged to attend all the away games together.

The format was always the same. We would leave London early, stop at signals to let other trains go through and stop at stations to change locomotives. Quite often we would stop at Crewe and see a plethora of guys with acne and NHS glasses, wearing anoraks and rushing around with notebooks taking down the train numbers. It was something new on us and a lot of the lads lent out of the windows shouting abuse.

At other times we would see opposition fans on their special trains pull up on other platforms or lines adjacent to the station and the abuse continued. It was definitely a logistical nightmare for the police.

The trains themselves had a real mixture of people on board. Young and old, families, and even players’ families – John Bumstead’s, Kerry Dixon’s, Mike Fillery’s, and David Speedie’s were regular travellers.  As with the times, several of our notorious fans also used to travel by the Special.  If you travelled on your own it wasn’t a problem – you were Chelsea and were welcomed, ridiculed, and given a nickname.

The trains were divided into a mixture of compartments and ordinary carriages and were often either too cold or too hot. The temperature dials never appeared to work.

I learnt early on to bring my own sandwiches Chelsea buns, as I was a bit of a patriot. The only alternative was the buffet which was a compartment on a train akin to a tuck shop at school selling Wagon Wheels, Panda Cola, and Mars bars – not the food for hungry football fans.

Using the toilets was a last resort too. They were freezing, always blocked, never flushed, and had an open hole to the tracks making it an unpleasant experience.

No alcohol was allowed on the trains either but that didn’t stop us. I shared a compartment with the two Pauls and we all bought 1.5ltr bottles of coke and added our favourite tipples to them before boarding the train. The steward that manned our section of the train (Brian, RIP) knew the score and was often more drunk than the rest of us, bless him!

We rarely pulled into the main station of the town where we were playing – the train companies preferred to take us to Manors (Newcastle), Edge Hill (Liverpool), or Mill Hill (Blackburn) and march us to the ground from there. At smaller towns we were greeted like aliens, with shopkeepers guarding their property and householders looking at us in horror.

The return journey to the station was a different matter altogether with opposition mobs waiting to have a go but knowing they couldn’t as we were in a police escort. The first 10 minutes of leaving a station were tense.

We were told to pull down the blinds and I quickly realised why. Further down the line opposition fans were lying in wait ready to smash the windows, which they did with great regularity, especially returning from a League Cup semi at Sunderland. The train had virtually no windows and no heating. We returned to London at 6am freezing, home for showers then straight to work.

Not all journeys were harmonious however. With long signal delays there was often a chorus of “Let’s Go ****ing Mental” and many lightbulbs were broken and thrown on track along with other pieces of furniture. The idiotic perpetrators forgot that they had to travel back on that same train!

I remember someone setting light to the toilet on the train. I remonstrated with him to put it out and he grabbed an extinguisher and accordingly obliged. I heard he got a letter from British Rail thanking him for his bravery in putting out the fire and saving lives. You couldn’t make it up!

My greatest memory, however, was after suffering many defeats, pulling into Euston or Kings Cross and the whole train singing, “We Love You Chelsea, We Do”. After all we had gone a long way to prove that.

The demise of the special came about due to the Persil vouchers (right) where we could travel on newer trains that didn’t break down, have a drink, go into town, and not be marched around by the police. It was like being released from the school gates.

Along with that offer you could also hand in the tops of Jif bottles. Noticing my mum had a few in storage, I did precisely that.  However, when she came to use the Jif it had solidified and was useless. She was mortified.

My best memory was Munich but for different reasons than you might imagine. At the end of the game I looked around and suddenly clapped eyes on Paul who I used the specials with all those years ago. We hugged and burst into tears before Paul said, “This is for having to endure all those special train journeys, especially after losing 6-0 at Rotherham.”

He was right. We had served our apprenticeship!

Thanks to Catherine McDonnell, Hugh Hastings and Alan Davidson for the images below (on a mobile and not seeing the images? Try this link)

Responding to the Wigan Athletic crisis, the EFL said this week that a “comprehensive reset” of financing the pyramid was needed to stop more clubs going to the wall.