Football fans have rights too

Last weekend, the Superintendent of Nottinghamshire Police said that Mansfield Town fans heading to their match against Notts County were not welcome in the city centre. Our caseworker Amanda Jacks tells us why its time to end such discriminatory thinking towards football fans…

Discrimination in this country is illegal and rightly so.

There are laws to ensure that everyone, regardless of their religion, sexuality, gender, colour, physical abilities and nationality is treated equally. Again, rightly so.

When it comes to football supporters however, no such laws apply and I’m certainly not about to argue that the support of your club should become a protected characteristic. That would be crass in the extreme.

Let’s imagine for a moment it was illegal to discriminate against football supporters. If it was we wouldn’t see signs outside pubs saying “away fans not welcome” and we wouldn’t see messages from a police force saying “fans won’t be welcome in the city centre”. 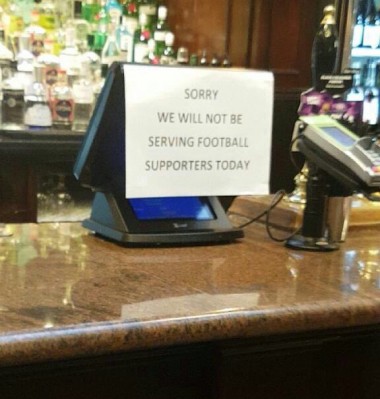 We wouldn’t see coach operating companies having to follow guidelines telling them to let the police know if supporters are booking their coaches. Perhaps we wouldn’t see bubble matches.

The fact that some of the examples above are comparatively rare doesn’t excuse them. Football fans are fully paid up members of society. They come in all shapes and sizes and from just about every background.  Football fans are artists, zoologists and every profession in-between. They are me, you, your mum, your dad, your friend, your neighbour, your colleague.

The idea that a publican wouldn’t serve the doctor that ran onto the pitch at White Hart Lane and helped saved Fabrice Muamba’s life is unthinkable. But he might not if he was wearing his Spurs shirt and wanted a pre-match pint away from home.

Members of our armed forces are revered and held up as heroes by many, but swap a uniform for a Millwall shirt and the welcome they receive at an away game is likely to be a police officer filming their every move, before ‘encouraging’ them to a pub where they’ll be escorted to the ground 15 minutes before kick off.

This all may sound very emotive, but it’s what happens.

Underneath the shirt or the scarf is an ordinary person going about their lawful business, exercising their lawful right of freedom of movement and association.

Yet the restrictions that can be placed on supporters and the treatment they may be subjected to, especially away from home when there is a tendency to treat supporters not as paying customers, but a potential public order problem, effectively renders them persona non grata.

There is another, more troubling perspective to all of this, as it’s still too easy to stereotype fans as knuckle dragging thugs. This can mean a worrying lack of scrutiny from some in the media when things go wrong, and a lack of scrutiny of football policing and legislation generally. People who campaign for the rights of others, or who take an interest in civil liberties, are amazed when I inform them of legislation affecting only football supporters.

It’s about time that people start to see behind the headlines to ensure that football fans are treated as equals.

Football policing in Greater Manchester – have your say

We’re looking for supporters’ experiences with police to help inform the north west’s IAG – a of group of fans that provide direct feedback to police on their match-day activities.

Prime minister: “We should have an independent regulator for football”

Boris Johnson has given his backing to an independent regulator for football, ahead of his own Government’s official response to the Fan-led Review of Football Governance.

WSL fans have their say on season resumption plans

Fans of five leading WSL sides have given their thoughts on the COVID-19 shutdown and their chances of returning to stadiums once the disruption caused by the pandemic has eased, and voiding the season has not proved a popular option.