Sunday evening saw the glitz and glamour of the 2011 Football League Awards, and it wasn’t just players and clubs that took home the honours. Kevin Monks, Coventry City fan and vice-president of the Football Supporters’ Federation, was presented with the npower Fan of the Year Award in front of guests from clubs, sponsors and the football industry.

Crewe Alexandra legend Dario Gradi MBE received a much deserved Contribution to League Football Awards. Gradi was manager at Crewe from 1983-2007, an astonishing 24 years, and has recently been reappointed caretaker manager. During his time at Crewe countless young talents came through the youth set-up including future internationals such as David Platt, Neil Lennon, Robbie Savage, Dean Ashton, and Rob Jones.

Established in 2006, the Football League Awards is an annual event which celebrates excellence both on and off-the-pitch. This means fans such as Kevin Monks are recognised alongside players, managers, and clubs. There are also awards for good community work, unsung heroes, matchday programmes, and more. 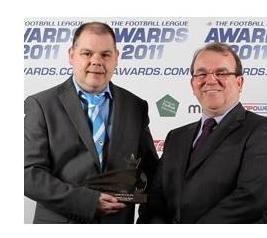 On winning his award Kevin (pictured right with npower’s Kevin Miles) said: “It is absolutely unbelievable to get this award. Just to be invited to the ceremony was great so to actually win it, is unbelievable. I must have been to about 3,500 Coventry games including the reserves and ladies teams over the years but this is something else.”

Kevin is not only a fanatical fan but a dedicated volunteer at Coventry City too. He is now in his 41st season as a Sky Blues fan – attending reserve, academy, ladies, and friendly games in addition to every first team game. He has also served on the Coventry Charity Cup Committee which gives thousands each year to nominated charities and brings match reports to fans around the world via Covsupport News Service.

For the third year running the FSA will be supporting the North West Football Awards – an event celebrating the best and brightest across all levels of football in the north west.

This month will see the first ever Fans for Diversity Awards presented at our conference on Friday 20th September, organised with our partners at Kick It Out.

The Football Supporters’ Association Awards in partnership with GambleAware are fast approaching, and we need your help once more in celebrating all that’s good in the game – with nominations now open.

The Football Supporters’ Association is pleased to announce the shortlists for the 2019 FSA Awards in association with BeGambleAware – voting is open now, and fans can back their favourites here. One hundred and nine shortlisted candidates will battle it out across 18 categories, recognising everything from the best players of 2019 to the best away days and fanzines.