Football on the doorstep: Fans for Diversity & Non-League Day

The Fans for Diversity campaign supported Non-League Day across the country at the weekend, here FSF’s Maria Horner tells us more about the work…

The 2018 Non-League Day celebrations were a perfect opportunity for the Fans for Diversity campaign to highlight the message that when community and football come together it really is for everyone to enjoy.

It’s easy to take that for granted, if for example; you’ve supported your team through thick and thin over decades or were introduced to football at a young age.

Some people genuinely don’t know what’s on their doorstep and the opportunities on offer, some are wary or unsure what kind of reception they’ll get if they turn up not really knowing what to do, they’re overheard saying something ‘daft’ or simply because they look different.

We are already lucky to know that many clubs offer something special and are a heartbeat in their community; yet sometimes they’re overlooked, overshadowed by their bigger glossier league neighbours or at the very least would welcome more support in terms of spectators.

My role is to bridge that gap. Clubs and existing supporters who want to see their club thrive, being open and inclusive, can use the Fans for Diversity campaign to spread the word into their communities that football welcomes everyone. We can find those hard to reach groups and encourage them to engage and support their local team. 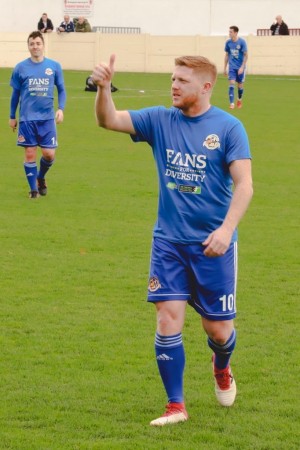 This Non-League Day Altrincham FC welcomed a group of people who’ve been resettled in Wythenshawe, Greater Manchester from the Chagos Islands, south of the Maldives. While the UK can’t do tropical sunshine in October the club did provide a warm welcome! The club also hosted special guests Paralympic Gold Medallists Neil and Lora Fachie MBE.

Bradford Park Avenue AFC hosted Kidderminster Harriers FC; and both teams and volunteers promoted the campaign as we begin working with both clubs on future projects.

Worcester City FC and Worcester City FC Supporters’ Trust have embraced the campaign since a recent meeting and are already looking to form partnerships enabling older isolated people to attend matches. There are also plans to host an event to engage with the wider community in Worcester.

The team warmed up in their new T-shirts and the club also welcomed Fans for Diversity groups Proud Baggies, Apna Albion and Villains Together supporting Non-League day.

Whitehawk F.C. must have had the most clean and tidy fixture with DJ Ironing board on the decks as part of their celebrations with local junior football club Hollingbury Hawks as mascots & ball boys/ girls.

So If you or your supporter groups wants to get involved or find out more about our diversity work at non-league level, you can contact me via [email protected],uk. We look forward to hearing from you!

Nominate your non-league away day of the year

The FSA has once again teamed up with the Non-League Paper to sponsor its Non-League Away Day of the Year Award, and nominations are open now.

Blyth Spartans have been named as the 2021-22 overall winners of the Best Away Day in non-league at the National Game Awards in association with Buildbase. It is the third time we’ve partnered with the Non-League Paper to recognise the clubs who are the best at welcoming fans from Steps 1 to 4 of the National League, and the first since 2019 due to the COVID-19 pandemic.