Homes of Football: “Waiting For The Play To Unfold” Coventry City

“Waiting For The Play To Unfold” Coventry City 1992 (©StuartRoyClarke)

Versus Manchester United before a capacity crowd, in the deep mild midwinter at their former home. No one knew then in 1992 that the club would “have” to move house seasons later. Or that they would be relegated after being a mainstay of the top division in English football for so long.

I focused on this image because the children have been passed down from the stands (all-seaterism was kicked out by Coventry fans after Jimmy Hill) and they were spilling on to the pitch area, but in a non-threatening, old-fashioned way. I liked this image because it invokes trust, over-capacity without mishap, and the final days before a return to compulsory across-the-board all-seater stadia, brought on by the Taylor Report.

Everything looks a bit crappy – but not half as crappy as what is facing Coventry City fans in 2013 with no stadium to call home, paltry gates, 10 points deduction… fasten your seatbelts it’s going to be a bumpy ride. 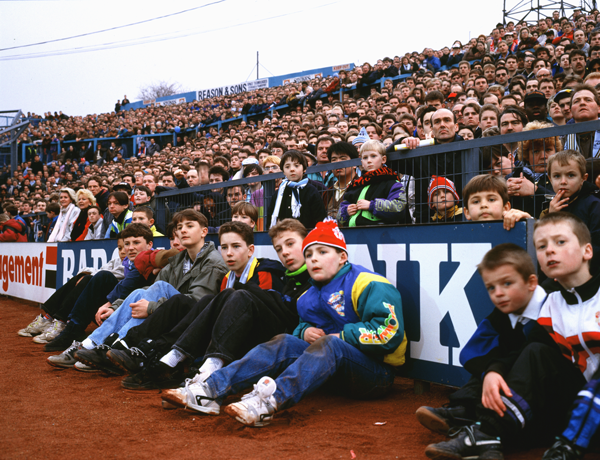 Coventry United of the Women’s Championship have announce that they are going into voluntary liquidation, halfway through their first season as a fully professional club.

This bank holiday weekend the EFL play-off finals will be taking place at Wembley – and once again there will be pub splits in place for each fixture.