Huddersfield Town: what role do fans have at a well run club?

As well as the club returning to the top flight of English football for the first time in 45 years, one of Huddersfield Town’s leading fan groups has also enjoyed a renaissance off the pitch, too.

“Originally, we were a survival trust back when the club went into administration and the new group is born out of the experience of that period,” says Jim Chisem, HTSA secretary.

“Town fans raised hundreds of thousands to help save the club but the club is in an excellent position now – on and off the pitch.

“So when the new trust board was in place we sat down and we asked ourselves ‘what role does a supporter trust have a well-run club?’”

Huddersfield Town have enjoyed stability off the pitch in recent years and have progressed well on the pitch too. Season ticket prices are among the lowest in the Premier League (£200) and the relationship between club and fans is a positive one.

With life-long fan Dean Hoyle now owning the club and overseeing their return to the top-flight, Huddersfield Town is often cited as well run – particularly when held up alongside the likes of Sunderland, Newcastle United or other clubs owned by largely uninterested billionaire owners (foreign or otherwise).

The challenge of finding a raison d’être at a well run club has not hindered HTSA, who have become one of the most active supporter groups in the country.

Over the last 12 months alone the group has launched campaign work on safe standing, helping women get to the match, supporting women’s football and foodbank collection drives.

“The difficulty for us has been finding that purpose,” Jim said. “We don’t have a single cause to rally round like the fans do at say Blackpool, Hull City or Leyton Orient.

“We’re been trying to figure it out and decided that community activism would be the way forward.” 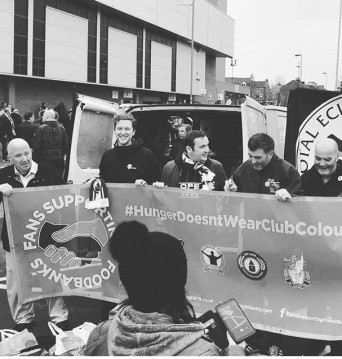 HTSA have engaged in a program of community work that has seen them launch the Fans for Foodbanks initiative in West Yorkshire, holding a number of successful foodbank collections, including joint collections with supporter groups at other clubs visiting the John Smith’s Stadium.

One of the largest collections was at the recent Liverpool match, with travelling scousers helping out in solidarity, by bringing their own donations along too.

“It’s been really positive,” Jim says, “We’re received a lot of encouragement from the Blue Union at Everton and Spirit of Shankly at Liverpool. It shows what can be achieved when fans work together.”

Like pretty much everywhere else in English football safe standing is a hot topic in Huddersfield. Together with atmosphere group Cowshed Loyal, HTSA have launched a campaign to put their club at the forefront of the safe standing campaign.

Jim said: “We launched Stand Up for Town with Cowshed Loyal last year and there’s been a lot of interest in it.”

Safe standing has overwhelming support among Town fans, Jim said, pointing to the recent HTSA survey that showed 96% of Huddersfield Town fans back the choice between standing and sitting.

“It’s driven a lot of engagement,” Jim says. “We want to be the first Premier League club to do it.”

Learning on the job

HTSA have one of the youngest boards of any supporter organisation in the country, with most of the positions taken up by supporters in their early, mid or late-twenties. Although the new board has enjoyed a successful 12 months, Jim says they still have a lot to learn.

“We’re still learning a lot as we go,” he said. “But we’re lucky enough to be able to lean on the experience of fan groups and supporters trusts across the country, as well as the FSF and Supporters Direct.

“It’s interesting to learn how other supporter groups operate, we were thinking about a co-chair system so it was really good for us to speak to Kat and Martin who co-chair Tottenham Hotspur Supporters Trust.

“It was useful to learn about the positives, the drawbacks from others.”

The young group had to learn quickly when they made the national media last summer following their criticism of the EFL’s play-off finals ticket pricing.

“It was definitely a hot topic and gave us a level of exposure we didn’t have much experience of,” Jim says. “But we felt like it was the right thing to do.”

Jim says the group has made a deliberate effort to update HTSA’s online presence and social media work. “It’s all part of the job,” Jim said. “You’ve got to put yourself out there, make yourself available to speak to supporters and answer their questions.

Although devoting significant energy to community activism and safe standing – HTSA aren’t neglecting the bread and butter of supporting their team.

“We want to be part of the fabric of club life,” Jim says. “We’ll continue to represent Town fans as best we can on stuff that matters to match-going fans – stewarding, policing, ticket prices. We’re also working to get supporter representation on the local Safety Advisory Group.”

HTSA also run coaches for supporters travelling to see the Terriers on the road, with co-operative pricing – with kids paying their age.

“Even now supporters have a role to play,” Jim says.

Fan groups at Liverpool and Tottenham Hotspur have welcomed club decisions to reverse staff furloughs, as executives at both outfits listened to their supporters’ concerns.

It’s hard to know which is our favourite bit of this goal – a calamitous concatenation cooked up by Copenhagen in their Europa League qualifier against Rijeka last night.

Macclesfield Town fans have responded to the club’s latest EFL charge and say the club’s very future is in the balance.