Hull City fans have understandable concerns relating to owner Assem Allam’s “loaded” ballot of season ticket holders on the club’s name change. The change was rejected by the FA’s Membership Committee last week and this is Allam’s attempt to resurrect the issue before it goes to the FA Council for ratification. We doubt the Electoral Commission would be impressed. City Independent Editor Ian Waterson’s open letter was sent to Hull City, the FA, the FSF, and SD…

To whom it may concern,

I would like to register my utter contempt for the ballot of season ticket holders that Hull City AFC are currently undertaking.

Hull City season ticket holders are being invited to poll their opinion on the following: 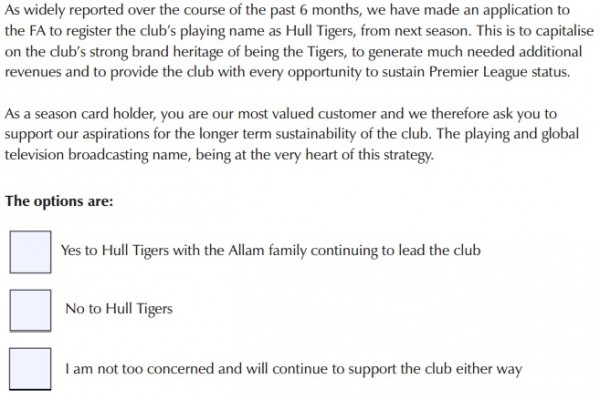 Aside from the ballot appearing ‘loaded’ I need definitive clarification if this ballot is actually about the proposed name change, or merely a vehicle to dissect the popularity of the Allam family at Hull City AFC?

In addition to that, there are a number of serious issues surrounding this poll – rendering me unable to vote – which I must bring to your attention, including and not limited to:

In my opinion, all of the above points should’ve been remedied before any polling takes place – leading me to clearly believe there isn’t a robust ballot system in place to fairly canvass Hull City season ticket holders’ views on this matter. Therefore, I am left with no other choice to but to formally register my complaint with the club until all the assurances I’ve outlined can be satisfied.

I also need to make the club aware a copy of this email will be sent to the FA, the Football Supporters’ Federation and Supporters Direct. This is because I would at least like to place my complaint on record with other parties that may hold a vested interest in this ballot, while no independent adjudicator is in place to contact me and address my concerns.

While Hull City’s fans might have expected the club leadership’s entire focus to be on the battle for Championship survival they have instead turned their attention to the media – banning local journalists and hitting out at The Athletic for “misleading gossip”.

A group of 10 Bristol City fans have gained an out of court settlement from West Midlands Police on the eve of a court hearing into the force’s alleged misuse of dispersal powers at a fixture four years ago.

Birmingham City have been charged by the EFL for allegedly breaching the business plan imposed on the club by the league following sanctions last season – and now Blues fans want answers.

Sussex Police say they have learned lessons and taken action against senior officers following complaints from Crystal Palace fans who travelled to Brighton in November 2017.