At this weekend’s FSA AGM, held in central London, two supporters were recognised for the work they’ve done within the supporters’ movement this year.

The Jacqui Forster Memorial Award is designed to celebrate and recognise women like Jacqui who give their spare time to promote the values and principles of the supporter movement.

Jacqui, a former member of the Supporters Direct staff team who passed away in 2018, was involved in almost every one of the 200 supporters’ trusts at some stage of their development.

Alongside her professionalism was a personality and warmth that will be fondly remembered and sadly missed by all in the movement, and more latterly from her new venture, Women at the Game.

This year’s award went to Christine Seddon, chair of Blackpool Supporters’ Trust. Christine was a popular candidate, receiving several nominations from fans across the country.

Christine was a high-profile figure in the long campaign to remove the Oystons from Blackpool FC, even appearing on the BBC’s flagship magazine programme, The One Show, to talk about their change of ownership and what it meant for the town.

Jacqui Forster’s partner Peter Baker, who presented Christine with the award, said: “The nominations, as last year, were all of a high quality and any of them would have been worthy winners. However, Christine had the edge and it also seemed fitting this year that the campaign Blackpool supporters have run for so long has finally paid off.

“Jacqui was heavily involved with setting up the Blackpool Trust and she would certainly approve of this years recipient particularly as Blackpool was a place dear to her heart.”

Gareth White from Blackpool Supporters’ Trust said: “Christine has become the voice of Blackpool fans in their fight to rid the club of the Oyston family.

“She has been articulate, principled, steadfast in her commitment and has offered strong visible leadership to everyone who wanted regime change at the club.”

The Richard Lillicrap Award was established after his premature death in 2007 – Richard was an instrumental in forming the Swans Trust who played a vital role in saving the Swansea City in the 2000s.

This year’s award went to Nick Hawker, chair of the Exeter City Supporters’ Trust and a director at fan-owned Exeter City FC.

Nick was nominated by his colleagues at Exeter City Supporters’ Trust for his work throughout 2018-19, not only at Exeter, but offering support to fans of other clubs too. Nick’s spent many hours on the road meeting other supporter trusts and fan groups – notably speaking at Torquay United, Northampton Town and Yeovil Town, often out of his own pocket.

Exeter City trustee and FSA national council member Neil Le Milliere said: “Nick is an excellent ambassador for our club and the supporter movement, we are both lucky to have him.” 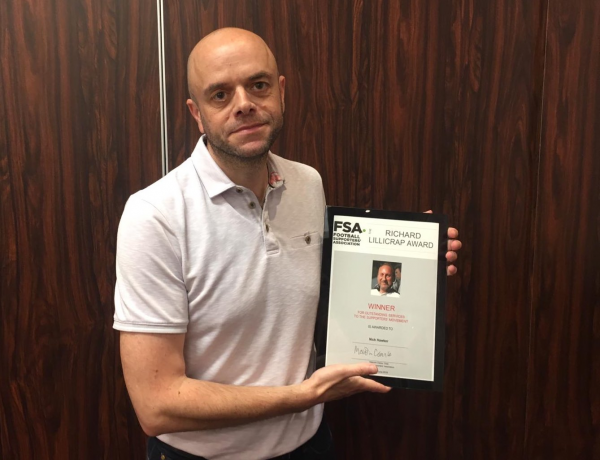 The winners of the Richard Lillicrap Award and Jacqui Forster Memorial Award are decided by panels from a list of nominations. The awards were presented at the FSA AGM on Saturday 29th June 2019 at the Royal National Hotel, London.

Vicki Goodfellow worked at Supporters Direct alongside Jacqui Forster for many years before Jacqui passed away in 2018. Here, Vicki explains Jacqui’s legacy and the Jacqui Forster Memorial Award. If you know anyone who deserves to be nominated, we’d love to hear from you…

The Jacqui Forster Memorial Award, an award that celebrates women who do great things for the supporter movement, has returned for 2022. Jacqui worked for Supporters Direct (SD) one of the FSA’s predecessors from 2003 until 2018, when she sadly passed away, following a long battle with cancer. SD was one of the forerunner organisations which eventually became the FSA.

The Richard Lillicrap Award, an award to recognise those that go beyond helpings supporters, has returned for 2022.

The Football Supporters’ Association Awards in partnership with GambleAware are fast approaching, and we need your help once more in celebrating all that’s good in the game – with nominations now open.