Wales travel to Nanning in late March to compete in the four-team China Cup and FSF Cymru are encouraging travelling fans to do their homework. Here Paul Corkrey from FSF Cymru tells us more about his reconnaissance trip to the capital of Guangxi…

Nanning is a huge city, still being developed with some 2 million new homes under construction, complete with new roads, railway and metro stations, as well as underground railways.

The population in this supposedly minor city is already over 6 million and will rise to over 8 million in a few years and the infrastructure is being put in place already, including huge shopping centres and rows of high-rise apartment blocks.

They have also built stadiums there, including the one where the China Cup will take place, at the multi-purpose Guangxi Sports Centre.

Opened in 2010, the stadium is used mostly for football matches and holds 60,000 spectators – which is incredible when you consider the fact there is no actual professional football team in the city… yet.

The stadium hosted all matches of the 2017 China Cup. We have an initial allocation of 1,000 tickets which will be more than enough. 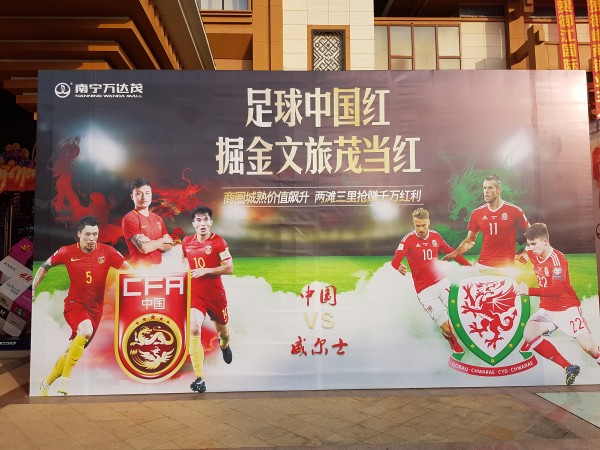 There is no big drinking culture like that of the UK or Europe, but we did come across one location that would suit the Welsh fans it was called Bar Street and consisted of pubs, restaurants, cafes and night clubs all in one complex on a lakeside location.

The bars tend to open 8pm at night until the early hours but not in the afternoons for some reason but there was live music in most of them and a large selection of beers and spirits that you will recognise from back home.

Minge Hu Bar Street, as it is more commonly called was opened in October and some of the bars there include the excellent 97 Live House, Holly Wine House, The Bar and the UK Pub as well as very good fish restaurants, coffee shops and a night club.

There is also a pub called the Queens Head British Pub based at Jiang Bei Da Dao beside 303 Hospital South Gate but we never visited this so can’t really recommend it, but it may be worth a visit.

Most bars are found at hotels and one of the best examples is at the Marriott hotel in The Lounge where you can also get food, and many have said it is the best buffet for western food in all of Nanning. You will find the Marriott at 131 Minzu Avenue.

These are essential for entry into mainland China and there are a variety of different types but the cheapest is the One Visit Visa, then you can get a two visit visa or multiple-visit visa, you can do this online or through a designated travel agent but please visit this Visa for China website.

You will be required to complete a landing card that you can obtain from the stewardess on the flight out this will be an entry and departure form, you complete both the custom officer will only keep the entry section and you must keep the departure section safe with your passport to get out of China.

Very good world-wide insurance is also essential although there may not be the very best hospitals in Nanning and unless its an absolute emergency you may be better flying out for treatment.

Taxis were very cheap in Nanning and the very best way to get around the city and to get to the stadium.

You will find that Twitter, Facebook, WhatsApp, Google and a few other internet staples you are used to will not work due to them being blocked by the Chinese Government. The Chinese alternative to Whatsapp, WeChat, works well though.

Some fans will have experience with VPNs (virtual private networks) and they can give you access to sites otherwise blocked in China. Anyone can get a VPN – some are free, many are very cheap – but it is a personal choice with risks and you may need to investigate it before deciding if it’s for you.

For visitors and tourists to China, there are no required vaccines. This means that by law, there are no vaccinations that you must get before you visit. However, you are advised to be up to date on routine vaccinations such as Tetanus-diphtheria (DPT), Measles/Mumps/Rubella (MMR), Varicella (chickenpox), Hepatitis A and Typhoid

Thanks to Samuel Yuen for the headline image used in this blog. Reproduced here under Creative Commons license.