In the first of a four-part series on away ticket prices across the EFL and Premier League, Bradford City fan Manny Dominguez has been looking at what League One fans can expect to pay on the road…

To help you get an idea about prices for away matches this season, in advance of them appearing on your own club’s website, I’ve researched all the away ticket prices across League One.

Overall, it looks as if there has been a steady increase in away ticket prices across the league as a whole.

The most expensive prices have crept up to £30 at clubs such as Bolton and Milwall. At Sheffield United the most expensive seats for a Category A match are £25 and even AFC Wimbledon charge £24. 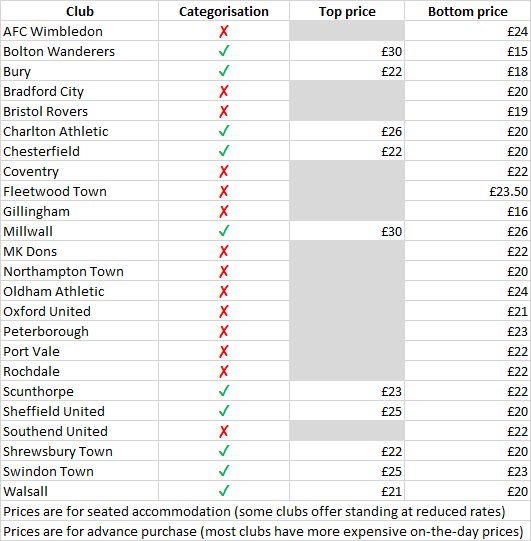 Standing accommodation is slightly cheaper across the division – Fleetwood being the most expensive standing at £21.50, AFC Wimbledon the cheapest at £17. For evening games, MK Dons reduce their prices to £15 for the away side’s season ticket holders.

The increase in the number of former-Championship clubs has unfortunately contributed to the shift in prices, but it’s pleasing to see that match categorisation is a minority practice (only 10 clubs use this).

A lot of fans don’t like categorisation – I’d like to see match categorisation done away with as a concept at all clubs. Away match tickets should be one set price, £20 or less.

I should add that League Two ticket prices aren’t too far behind. If you look at teams like Luton Town, who have match categorisation, you could be paying £23 to go there. Barnet’s most expensive ticket is £25. Even at non-league Halifax Town, it’s £16 seating and £15 standing.

We’d like to thank Manny for pulling together all the League One away ticket prices for this blog. Over the coming weeks, we’ll be publishing similar stories on away ticket prices in the Premier League, Championship and League Two. If you’d like to contribute and help us pull together the data for League Two email: [email protected]

Fulham fans protested outside Craven Cottage at the weekend against the club’s sky-high match-day ticket prices.

The FA agreed a reduction in ticket prices for 3,000 tickets at this year’s FA Cup final following lobbying efforts by supporter representatives – but many fans remain unhappy with this season’s pricing.

The cost of attending the World Cup final has gone up again – with FIFA revealing ticket prices 46% higher than its previous tournament making it the most expensive World Cup to date.