Leeds United fans have unveiled a new mural of one of their cult heroes to celebrate diversity in the city in a project funded by the Fans for Diversity campaign.

The Leeds United Supporters’ Trust have created another mural due for completion next week and this time it’s dedicated to Leeds United legend “The Chief” Lucas Radebe.

Designed by Adam Duffield, the mural is part of an ongoing project to celebrate the rich history of Leeds United across the city, using different types of art.

The mural has been fully funded by the Fans for Diversity campaign, a partnership between the Football Supporters’ Association and Kick It Out to promote inclusivity in the game.

Owing to Radebe’s educational and anti-racism work while playing for Leeds United, the trust felt that Lucas was the perfect symbol for inclusivity in the city and were delighted the project received funding.

“I am very proud and honoured to be chosen as the subject for the latest mural from the Leeds United Supporters’ Trust,” Lucas said.

“I have been a passionate anti-racism campaigner during my playing career at Leeds and since I have retired, so I am delighted that this mural will stand as a symbol for the message of inclusivity and diversity.”

The 35ft mural is painted on the side of Sweeney Todd Barbers on Potternewton Lane in Chapel Allerton where owner Richard Dwyer became a friend to Lucas during his time at Leeds.

Lucas Radebe left a long-lasting legacy as a cult hero across the city and especially amongst Leeds United fans, so much so that many fans named their sons after him. There are now hundreds of Lucases around the city, so the trust invited junior members and fans called Lucas to put their handprints around the mural and sign their name. 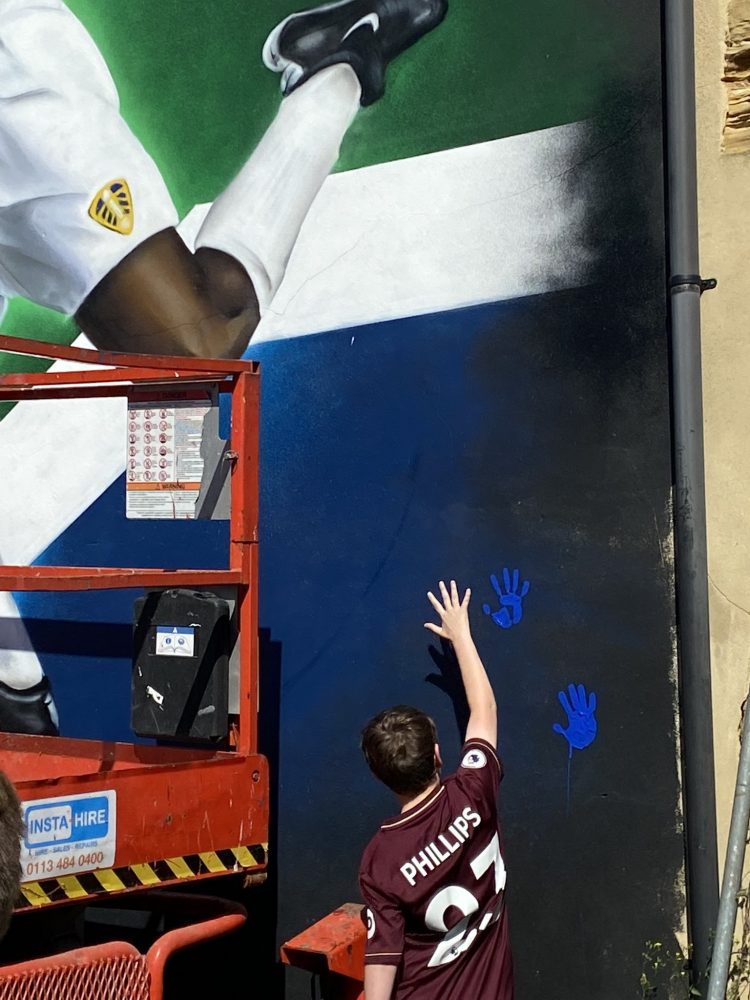 Anwar Uddin, Fans for Diversity Campaign Manager said: “I feel proud to have played a small part in this creation, as a former player and someone who is passionate about equality, Lucas Radebe was a genuine role model and I hope this mural sparks many conversations about the chief in years to come.”

Leeds United Supporters’ Trust will be launching a website to track all the Leeds United-themed murals that can be found around the city for fans to explore – keep an eye out for that.

Adam Willerton, Leeds United Supporters’ Trust Secretary said: “It’s been great to work with the different groups to bring this mural to life and we’re so thankful to everyone that has helped make this happen.

“Our aim is not only to celebrate one of Leeds United’s all-time heroes, but to highlight how Lucas educated people with his work around anti-racism while playing for Leeds United.”

#TakeAStand calls for fans to back anti-discrimination action

The FSA is supporting Kick It Out’s latest campaign, Take A Stand, which is calling for action in the fight against discrimination in football.