This FSF guide has been produced ahead of the Champions League final fixture between Tottenham Hotspur and Liverpool in Madrid on Saturday 1st June. It will be updated as and when we receive new information from Uefa or local sources.

If you have any specific questions about the city, how to get there, where to stay or anything else then simply email us your questions. Through our extensive network of contacts at Football Supporters Europe and experience of travelling throughout Europe ourselves, we will be able to answer just about any query you have.

Fanzones and routes to the ground

Tottenham fans have been allocated Plaza de Colón, a square located to the northweset of Retiro Park. The advice for Spurs fans is to congregate here and then take the metro to the ground using Green Line 5 in the direction of Alameda de Osuna, getting off at Canillejas, which is to the north of the stadium (around a 15 minute walk). The nearest metro to Plaza de Colón is Alonso Martinez. Spurs fans will enter the ground mostly through Gate 17 (Fondo Norte)

Liverpool have been allocated Avenida Felipe II, also known as Salvador Dali Square – a large pedestrianised square to the northeast of Retiro Park. The nearest metro station is Goya, and Liverpool fans are advised to head to the ground from here on Red Line 2 getting off at Las Rosas at the end of the line (similarly a 15 minute walk to the ground). Liverpool fans will enter the ground mostly through Gate 3 (Fondo Sur).

Each match ticket holder will also be provided with a free metro pass for use getting around the city on matchday.

Fans with tickets for neutral areas are advised to head to the Estadio Metropolitano stop on Yellow Line 7.

The official Uefa fanzones, full of sponsored gimmicks and official branded merchandise, will be a Puerta del Sol, Plaza del Oriente (in front of the Royal Palace) and the Plaza Mayor.

There are expected to be a number of security checks before reaching the turnstiles, so make sure to arrive at the stadium in good time. The stadium is open 3 hours before kick-off (from 6pm local time).

There is potential for the winning side to be kept back in the stadium for 20-30 minutes after the final whistle to help with crowd dispersal outside the stadium. We’d expect most fans of the winning team to stay in for longer than this to see the trophy lift and to celebrate, but it’s worth bearing in mind. Spanish police will decide if a hold-back is necessary on the day, and communicate this where they can.

The match will take place at Atletico Madrid’s new Wanda Metropolitano stadium, with kick-off at 9pm local time (8pm UK). Each side has received an allocation of just under 17,000 tickets for the game, with 4,000 available through a public ballot on Uefa.com in April. The rest have been given to sponsors and national associations.

Spurs are the ‘home’ team and Liverpool the ‘away’ team for administrative purposes – in reality this means little beyond the allocation of the end of the stadium that each club will receive, along with the designated areas in the city and recommended transport routes to/from the stadium. It is expected each side will wear their traditional home kits. 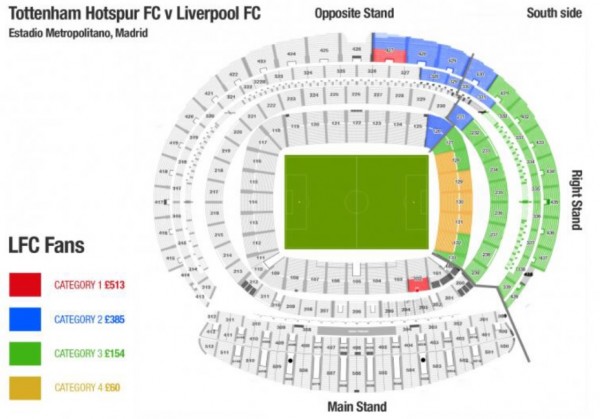 Want to know the view from your seat? Use Atletico Madrid’s handy seatfinder online here.

Carrying fireworks, drinks, weapons, laser pointers, sound-emitting devices such as megaphones, klaxons or vuvuzelas, suitcases, sporting bags, large backpacks and bags (maximum bag size permitted is 25x25x25cm) or any other items that are on the prohibited items list or could disrupt public order is forbidden

Advice for those without tickets

Opening hours: Monday to Friday, 8:30am to 5pm.
Consular phone lines are open from 9am to 4pm.

For Liverpool fans: To assist you when attending an away game, a dedicated fan support telephone number and email address has been introduced (this line of communication is for urgent matters relating to the game in hand only). This line / email will be made available two hours before kick-off and will be open until one hour after final whistle.  Outside of these times there will be a recorded message facility available for travelling fans to record any issues with regard to the game. The telephone number is 0151 230 5770 (From Europe 0044 151 230 5770) and the email address is [email protected], for data protection purposes please include your full name, membership number and D.O.B.

Our friends at CAFE (the Centre for Access to Football in Europe) typically produce a guide full of information for supporters with accessibility needs. We will share that information here as soon as it is published.

Thanks to Tomasz Baranowski for the image used in this blog, reproduced under Creative Commons licence.

UEFA’s proposals to expand the Champions League have been challenged by fans today, with Football Supporters Europe calling instead for “meaningful reform” to protect the game’s future.

Supporters’ groups from the FSA’s Premier League Network met last night and were unanimous in their opposition to UEFA’s proposed Champions League changes that will entrench the richest clubs, damage the English football pyramid and rip off fans. The FSA supports their stance.

Champions League expansion from 2024 gets go-ahead

UEFA today confirmed that their much-criticised Champions League expansion will be going ahead in 2024, but some concessions have been made following supporter lobbying.