MPs demand The Sun opens records on “The Truth”

In the aftermath of Hillsborough The Sun published an infamous front-page titled “The Truth”. The story alleged supporters abused a dead girl, picked the pockets of injured fans, urinated on police, and beat up a PC trying to give the kiss of life. 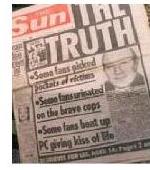 None of it was true and the paper’s sales on Merseyside collapsed as people refused to buy The Sun in utter disgust at the lies told. While the paper has since apologised, in July 2004 calling it “the most terrible mistake in its [The Sun’s] history”, the paper’s sales in Liverpool have never recovered.

The Sun attributed the comments to sources in the police force and an unnamed Conservative MP. This so-called “black propaganda” diverted attention from the real issue that appalling lapses in police crowd control were primarily to blame along with stadium architecture and fences.

The Hillsborough Early Day Motion (EDM), by St Helens North’s Dave Watts MP, asks: “That this House supports David Hawkins’ e-petition which calls on The Sun newspaper to provide full disclosure of all its records including the sources of information and documents which relate to The Truth story published on 19th April 1989; calls on Kelvin MacKenzie to make a full and unreserved apology for this untrue story which his newspaper published; and calls on all media outlets to refuse to engage him professionally until he has done so.”

EDMs are often used by MPs to draw attention to specific issues, campaigns, or events which might otherwise go unnoticed. While there is little prospect of an EDM being debated in the House of Commons they are often considered useful tools in gaining public and media interest in an issue.

On Monday home secretary Theresa May committed to release all of the government’s papers relating to the 1989 tragedy. These documents, including cabinet papers, would first be released to the independent Hillsborough panel. This was in response to a petition signed by more than 140,000 fans and backed by the Football Supporters’ Federation.

The Premier League has announced a new funding scheme for National League system clubs and those in the women’s game. Grants totalling £16m are available between now and the end of the season.

Birmingham City have been charged by the EFL for allegedly breaching the business plan imposed on the club by the league following sanctions last season – and now Blues fans want answers.

Newcastle United fans say they have been “ignored by the Premier League” following the collapse of the club’s takeover and the leading supporters’ group on Tyneside is now demanding answers.