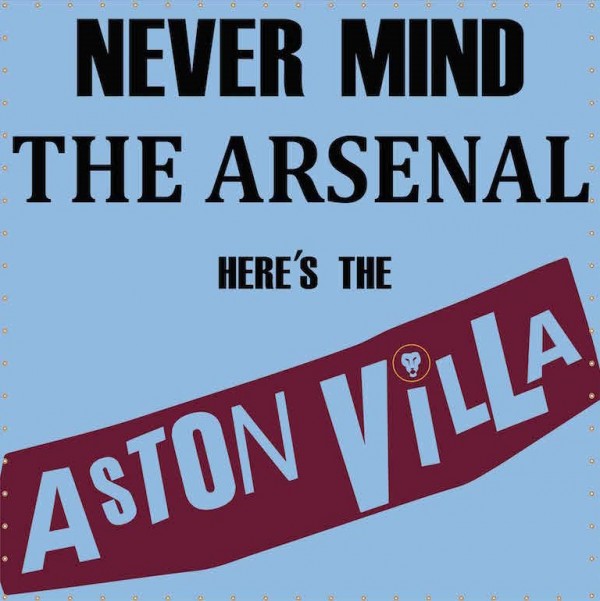 Guidelines and bureaucracy often throw up some bizarre cases, and football is no different, as FSF caseworker Amanda Jacks tells us about the FA’s decision to ban a surfer flag from Wembley…

Back in the 70s punk group The Sex Pistols released an album entitled Never Mind the Bollocks. Fast forward 38 years and, finding themselves in the FA Cup Final for only the second time since 1957, Aston Villa fan group My Old Man Said decided to create a surfer flag for the big day, based on pre-existing design, funded by his fellow fans who raised just over £3,000 virtually overnight.

Recognising themselves as very much the underdog, My Old Man Said made a play on the Sex Pistols album cover and came up with the design above.

Unless you know your punk music history or are of a certain age, you may not be aware of the controversy, leading to prosecutions, the Sex Pistols album cover provoked back in 1977. Similarly you may not be aware that Wembley Stadium management have banned the surfer flag from appearing inside the ground on Saturday.

So, what’s the connection? Very simply, words. In 1977 the word was bollocks, in 2015 the word is Arsenal. As quaint as it may seem, the word bollocks was deemed indecent, the public had to be protected from that, and thus police relied on legislation from the previous century to prosecute a record shop owner for displaying the offending album predominantly in its shop window. Suffice to say, the shop owner was found not guilty of four charges.

Society has moved on hugely since the 70s and today it’s accepted that we can be exposed to all manner of language and imagery without that having a negative effect on our behaviour. Unless, that is, you’re a football fan or more specifically in this case, an Arsenal fan, for the powers that be at Wembley have decreed that the Villa surfer is provocative and may cause goading.

Apparently, the rules state that one set of fans is not allowed to include within their flags or banners the name of their opposition regardless of the context. To their credit, Arsenal supporters are as unhappy at this decision as My Old Man Said and have lent their vociferous support.

Detaching myself from the obvious responses to this decision – echoed by many fans from both clubs and neutrals on social media – and the utterly low regard fans are clearly held in, what I find fascinating is the concept that a group of fans need protection from the sight of their own club name on an opposition banner in the same way, 38 years ago, shoppers in Nottingham couldn’t be exposed to the word bollocks.

In 1977, it was the establishment deciding what was decent for the public, today it’s football stadium management deciding what’s suitable for football fans. I’d suggest both have an inherent fear of ‘the mob’. As confirmed by Dr Geoff Pearson of Manchester University, expert in football fandom, there is absolutely no evidence whatsoever to suggest a disorderly reaction to this surfer flag.

This isn’t the only instance of the authorities deciding on our behalf what may cause crowd trouble. A few years back, the Safety Advisory Group decreed that West Bromwich Albion should stop playing The Liquidator as that wasn’t conducive to a family atmosphere.

I’ve long held the opinion that the crowd is controlled in obvious and more subtle ways meaning that, arguably, the authorities see a football crowd not as decent law abiding people, but as a default position, potential public order problems.

Bottle tops will be removed on the remote chance a full and lidded bottle may be used as a missile (yet hot, lidded drinks are sold within the ground); paying customers are asked to remove hats in case they have blades taped to their heads and so on.

Many fans bemoan the use of loud music ahead of kick off, after a goal and at full time, particularly celebratory music which stops an atmosphere building of its own accord.  I think it’s used simply to quell the excitement of the crowd due to fears as to where this may lead.

Back to the surfer, in my view, it’s a clever and witty design and perfectly sums up the idea that the majority of people see Arsenal as favourites to win the FA Cup (although as a West Ham fan, I can’t resist suggesting they be wary of a headed goal).

The vast majority of people commentating on social media and on the petition seem to agree with me and it’s a shame that the FA Cup Final will be a little less colourful on Saturday based on unfounded fears of Arsenal fans goading or worse after being very gently mocked by the underdogs – or the sight of their own club name.

Congleton Town will be flying the flag as the last remaining community-owned club in the Fourth Round of the FA Vase on this Saturday.