The fixture was scheduled to kick off at 4.30pm on Sunday but was postponed after around 200 supporters broke into the ground and held protests on the pitch.

It is the first time a Premier League match has been postponed because of fan protests.

Fans had gathered outside the ground and scores of green and gold flares – the colours of Manchester United’s first shirts when they were formed as Newton Heath in 1878, and of the original anti-Glazer protests in 2010 – were set off at 2pm.

Clarke told the media at the weekend that more fan protests are inevitable – both at the clubs who plotted a breakaway Super League and elsewhere – as resentment over unaccountable billionaire owners continues to simmer.

“Obviously it demonstrates the strength of feeling of the Manchester United supporters over what has happened in the last couple of weeks,” Clarke said. “And wider what many of them feel about their owners, the Glazer family.

“The vast majority of people there yesterday were peacefully protesting, but as inevitably happens on these occasions the focus gets directed towards the small number who cross the line.

“I think we may see more protests. If fans want to make a protest at their last home games of the season, I think that is absolutely fine.”

Since the collapse of the Super League project, the Government has announced its plans for a fan-led review of football governance which has a wide scope for potential reform of the game.

Clarke said: “We will be working with supporters organisations at all the clubs – including the rebel six – to ensure the evidence we give to Tracey Crouch is robust, well thought out and can produce some real solutions.

“I think the significant thing which has happened in the last couple of weeks is the Government has launched its fan-led review of the governance and regulation of football.

“It was in their manifesto but we were worried they hadn’t done anything about it.

“So in that sense we are very grateful to the rebel six as they have put this issue at the top of the Prime Minister’s agenda, got the Government to launch the review and this is the mechanism we hope will achieve real change.

“I am delighted with what they tried to do because the voice of the fans stopped them doing it, it has forced all the key issues right to the top of the political agenda, so my first reaction is ‘Thanks very much guys, you’ve achieved more in two weeks than I’ve tried to do in two decades’.” 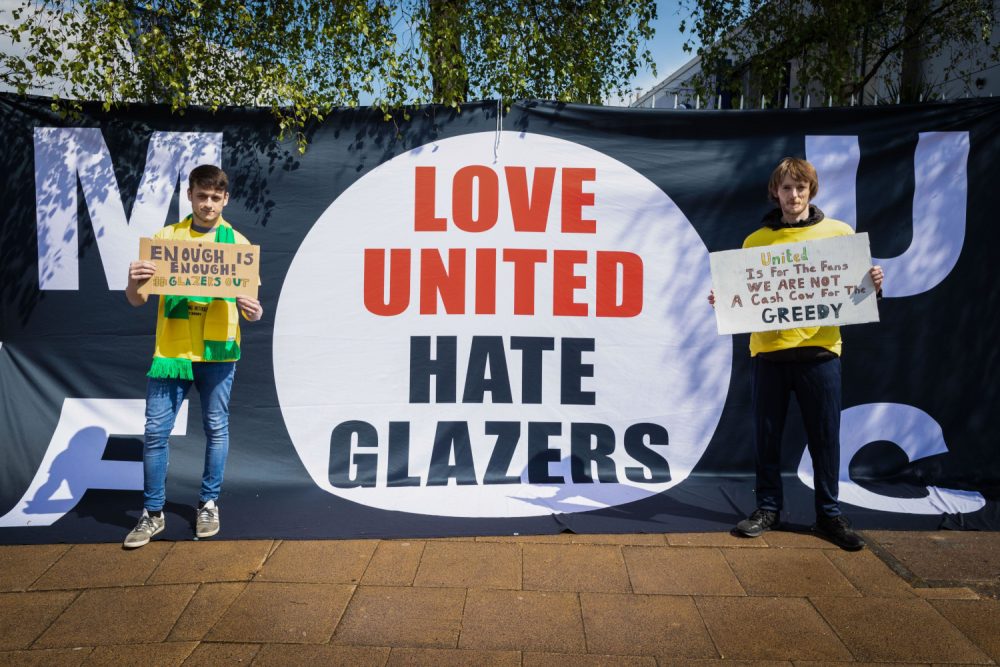 Manchester United Supporters’ Trust are calling on the owners to appoint independent directors at the club, to work with supporters to put a share scheme in place and commit to a full scale consultation with Manchester United supporters.

“What we witnessed at Old Trafford is the culmination of sixteen years since the Glazer family’s acquisition of the club,” MUST said. “Over that period, the owners have taken £1bn out of the club and we have witnessed decay and decline both on the field and off it.

“Supporters turned up on the day of a game they could not even attend, to peacefully protest and speak with one clear voice about the change that needs to happen at our club.”

Yesterday, MUST wrote an open letter to Joel Glazer, co-chairman and director at the club, calling for urgent dialogue with supporter groups.

“We have felt ever more sidelined and ignored,” they wrote. “After sixteen years not one member of the Glazer family has ever had so much as a conversation with us, the club’s supporters trust.

“We need to find a way forward.”

Return to stadiums – “I’m 73 years old and was apprehensive, but soon felt at ease”

The second round of the EFL season took place over the weekend with small numbers of fans allowed into stadiums for test events – and there were many new procedures to follow.

Everton Women take on Manchester City in the Women’s FA Cup final next month but following a change to Sky Sport’s broadcasting schedule that now clashes with Everton vs Newcastle United in the men’s game – leaving those who wanted to see both with a tough choice. Young Toffee Anna Mallanaphy is calling on the broadcasters to accommodate both fixtures and avoid the clash…