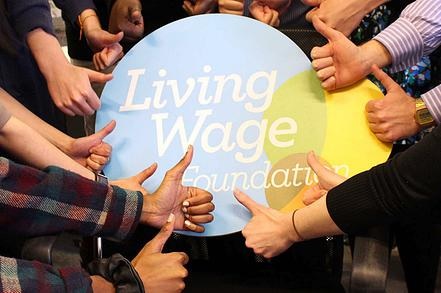 Football Beyond Borders, a campaign using football to encourage young people from disadvantaged backgrounds to achieve their goals, has been campaigning for the introduction of the Living Wage at all Premier League clubs. Following the announcement at the end of March, that the Premier League is seeking to become a Living Wage employer, Joel Sharples from FBB tells us why the PL must follow through on its pledge…

One month ago, Football Beyond Borders was part of a delegation of fans, community organisers and club staff that presented at 65,000-strong petition to the Premier League, calling on them to pay all of their staff the Living Wage.

The Living Wage Football campaign had been running for a number of years, led by Citizens UK and their local members across the country. As a charity that uses the power of football to tackle inequality, we knew this was something we had to support, and last year we began providing a platform for local campaigns at different clubs and putting pressure on the Premier League to take action on the issue.

The case for clubs to pay the Living Wage was already irrefutable, given the astronomical salaries paid to chairmen, players and agents. However when it was announced in February that the Premier League would be making £5.14 billion from the latest TV deal, a 70% increase on the previous deal, we knew we had to increase the pressure and highlight the fact that many top clubs still employ staff on the minimum wage despite their bountiful riches.

In response to the new TV deal, we launched a petition on change.org, calling on the Premier League to ensure that all staff were paid the Living Wage (currently at £9.15/hour within London and £7.85/hour outside). A range of clubs had already signed up to become an accredited Living Wage employers, but they weren’t the ones you might expect: Hearts, Luton FC, even non-league Dulwich Hamlet and FC United of Manchester. It took until December 2014 for the first Premier League club to break ranks, with Chelsea making the first move. Clearly there was no financial argument to be made, but simply a total absence of ethical standards.

The response to the petition was overwhelming, with over 65,000 people signing within two weeks. Having previously secured a meeting with the Premier League following a demonstration we helped to organise in December, we knew this would be the ideal opportunity to take the campaign right into the heart of football’s governing elite.

And come March, the Premier League announced that by the start of 2016/17 all full time staff would be paid the Living Wage. The pressure that had been building over the last few years, culminating in the petition and meeting in February, and the size of the new TV deal had clearly forced the the clubs to act.

There’s still a long way to go though. The Premier League’s pledge only applies to directly employed, full time staff, when the majority of staff on low wages (mainly working in catering, cleaning and security) are on part time or zero hours contracts, and these jobs are often sub-contracted to large agencies. Until the pledge is extended to these workers, it is not much more than a PR move by the Premier League.

Nevertheless, the fact that they have now taken a public stance on the Living Wage is an unexpected and significant victory for the campaign, and has prised open a space for us to talk about the workers that still don’t get paid their fair share of the Premier League’s wealth.

We will continue to campaign for ALL staff to be paid a Living Wage. Without the cleaners, bartenders and stewards, the Premier League wouldn’t exist. The wealth of the league is built on their labour yet they are still paid poverty wages. As football fans we need to stand up against this injustice.

If you would like to get involved in the Living Wage campaign at FBB please contact [email protected] We are particularly keen to hear from staff at football clubs.

Against a backdrop of the national lockdown, the Trident Leagues at Steps 3 and 4 (Northern Premier, Southern and Isthmian) have indicated a preference to cancel all remaining league fixtures. They are surveying their member clubs for their views on whether to continue with the 2020/21 season.

Over recent weeks we’ve been looking in more detail at one of our Sustain The Game! key principles and this week it’s financial controls – fans want rules with real teeth which are independently enforced as clubs and leagues can’t be left to regulate themselves.

The idea of the European Super League is dead, at least for now, but the hard work to ensure that it can never return is only just beginning, and the first step in that process is demonstrating that there is political support for the much-needed reforms to our game.

MPs have told Premier League and EFL football chiefs they are “on notice” to end the “current fiasco” which has seen many lower league clubs teetering on the brink of survival.