In 2008, Bolton Wanderers, one of the founder members of the Football League, were enjoying life on the European stage beating the likes of Atletico Madrid in reaching the last 16 of the UEFA Cup, whilst also holding their own in the Premier League.

At the end of the 2011-2012 season, they were relegated to the Championship after 11 seasons in the top flight and the downward spiral that followed was nothing short of catastrophic.

Fast forward three years and the end of 2015 sees the club planted firmly at the foot of the Championship, with reported debts approaching £180m. The club had been openly for sale for some time.

Reports of interest were few and far between, no deals were secured, and the club continued its downward spiral of further debt, lack of success on the field, falling attendances and unsustainable running expenses. 2015 ended with the shadow of an HMRC winding-up petition.

Many supporters had simply had enough. Lack of communication and a poor run of form led to fans feeling increasingly disconnected from the club. Something had to be done and following exploratory conversations with Supporters Direct (one of the FSA’s predecessor organisations) several concerned fans started to learn more about building a supporters’ trust.

Pivotal to what happened next was an open meeting, held on 6th January 2016 at the stadium where 1,000 fans gathered on an eventful night to vote unanimously for the formation of a Bolton Wanderers Supporters’ Trust (BWFCST).

On an emotionally charged evening, the loyal Wanderers’ fans in attendance heard from Ashley Brown, then representing Portsmouth’s Pompey Trust, who had a wealth of experience of a distressed football club.

On 15 January 2016, the Bolton Wanderers Supporters’ Trust formally came into being, formed in record time due to the invaluable support received from Supporters Direct.

Then the hard work really began. Engaging in dialogue with the then owners of the club was an obvious and significant priority.

The owner, Eddie Davies, had engaged Trevor Birch (recently appointed as new EFL CEO) to deal with the sale of the club. Trevor did have engagement with the newly formed BWFCST, yet repeated attempts to engage with the owner on behalf of supporters were largely unsuccessful.

The concern about the perilous existence of the club grew by the day and the supporters’ trust started to look at what could be done to protect its very existence. 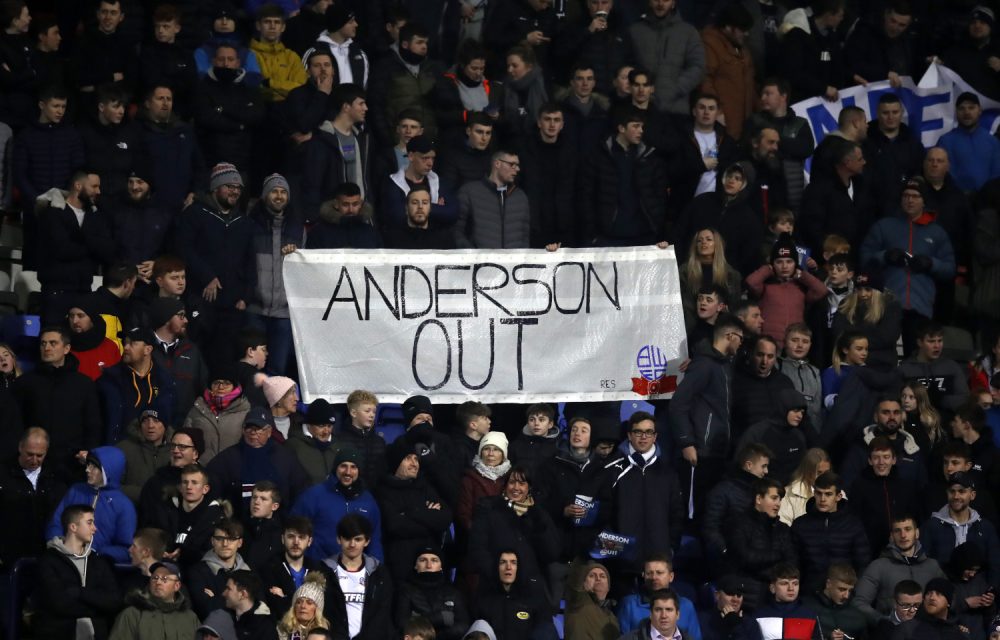 On a fateful day in March 2016, Bolton Wanderers were on the verge of liquidation and were only saved at the last minute by the sale of the club to Dean Holdsworth’s Sports Shield BWFC. This sale included the input of Ken Anderson.

Moving forwards from this transfer of ownership, two initiatives were particularly important – protecting club assets and raising much needed funds. In February 2017, BWFCST secured local authority approval for the (then) Macron Stadium to be listed as an Asset of Community Value (ACV), thereby protecting that property and its purpose from any future ownership changes behind the scenes.

During 2018, the trust had established a Community Interest Company (CIC) to act as a future investment vehicle and later encouraged fans to contribute to a fighting fund as the anxiety about the club’s existence reached new levels under the then sole ownership of Ken Anderson.

Rumours of pending administration coupled with constant refusal to engage continued. The club was, again, on a knife edge.

By May 2019, Wanderers officially entered administration – having been relegated from the Championship and having failed to fulfil their final match against Brentford. Players and staff had also gone unpaid.

Liquidation remained a very real prospect. Sadly, our neighbours at Bury didn’t survive, but with the announcement in August 2019 that the club had secured new owners in Football Ventures, came a new dawn.

Off the pitch, difficulties engaging continued initially – the club needed stabilising quickly. On the pitch, the consequences of administration were contributory factors to another relegation, this time to League 2, for only the second time in the club’s history.

For many fans who had experienced their club being 24 hours from liquidation, a renewed appreciation for the club and the role it plays in their lives emerged – further highlighted when COVID-19 hit and football came to a grinding halt.

Through the most significant crisis in living memory, a new dialogue emerged. As a trust, we are now more actively engaged with the club, it’s chief operating officer, the club’s community Trust and the BWFC Development Association than at any other time since the supporters’ trust was formed.

Input from fans through trust-led surveys have given the club valuable insights on matters such as season tickets, with many fans agreeing not to pursue refunds for games not played, relieving pressure on the club’s finances.

The trust’s forthcoming AGM, whilst being held virtually, will also be attended by the manager & chief operating officer.

Now with over 4,000 members (and actively looking for more), this is first for BWFCST, founded for and by supporters to have a real say in the running of their club and there is now real optimism that our fans will have a voice going forward. Here’s to the next 5 years.

Bolton Wanderers and Bury supporters face an anxious wait this evening as both of their clubs face expulsion from the EFL.

English football’s original supporters trust, Northampton Town Supporters Trust, are celebrating their 30th anniversary this year and here they tell us about the trust’s pioneering journey since 1992…

The FSA’s Fans for Diversity campaign and Women’s Game network are celebrating the 20th anniversary of Bend It Like Beckham – a film which, upon its release, inspired a generation of young girls to get involved with football as players and supporters.