“Return to the bad old days”: A response to media hysterics

Yesterday UEFA President Michel Platini joined the recent pile-on against football fans and warned of a return to the “dark days” of European football.

Although Platini’s concerns were mainly with countries such as Greece and Russia – where radicalisation and severe disorder (and ancient police tactics) stubbornly remain – the British media hasn’t passed on recent opportunities to put the boot into football fans.

Media outlets continue to hype up hooliganism in wake of the two celebratory pitch invasions in the quarter finals of the FA Cup at Villa Park and the Madejski Stadium. We’re asking where is the balance in covering football-related disorder?

The BBC, Daily Express and The Daily Mail have been contributing hysterical coverage. Headlines and quotes about the “bad old days” and a “return to the 1980s” were splashed across screens and newspapers.

Prior to Sunday’s fixture between Liverpool and Manchester United at Anfield, the Daily Mail said Merseyside Police were on “red alert” over hooliganism – a sensationalist response to six banning orders coming to an end (the game passed without major incident).

What hasn’t been reported is the reality: football in this country has never been safer. As we reported at the beginning of the 2014-15 season, football arrests are at their lowest point on record despite attendances going up and up over the last 30 years.

Former-FSF national council member Chris Nash, who compiled arrests statistics for us (see graph below), said: “The Home Office statistics show a success story in our game.” The figures brought together by Chris show that in spite of attendances rising, disorder was coming down: 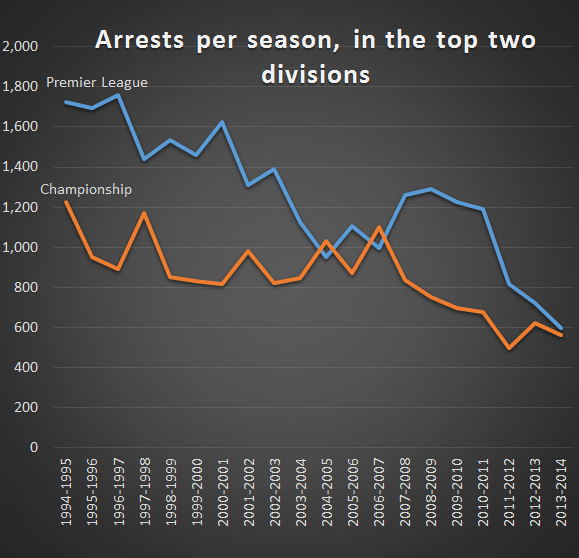 Amanda Jacks, FSF caseworker said: “The figures show that the vast majority of football fans can and do behave themselves.

“Football fans know how to behave, but the fact that they’re continually demonised in the media leads to a very low expectation of football fan behaviour – that they’re always on the edge of disorder.”

Despite most of the coverage being sensationalist in nature, there have been a few oddities – as Martin Cloake, co-chair of Tottenham Hotspur, pointed out in a recent blog.

Most notably, the BBC in promoting the FA Cup said that no FA Cup competition is complete without a pitch invasion one day, then says it’s a “return to the dark ages” the next.

“When such utter tosh was challenged the response was reminiscent of the press treatment of anyone who tried to discuss Irish republicanism or the ANC’s struggle during those much-referenced dark days of the 80s,” Martin said in his blog for News Hub. “No attempt at measured debate, just a barrage of ‘but do you condemn violence?’

“Any attempt to point out the inaccuracy of the sensationalist, blanket statements being made was immediately labelled an apology for violence.”

Finally, it was heartening to see fans’ groups challenging this narrative – on social media and at matches. At Villa Park the Brigada 1874 arranged banners criticising the media coverage of the pitch invasion and the demonisation of fans.

Thanks to Danny Molyneux for the image used in this article. Reproduced here under CC license.

Earlier today it was reported that clubs at the top of the Premier League had been planning in secret to pursue a wide-ranging restructure of the English footballing pyramid named “Project Big Picture”. Below is an initial statement of response from the Football Supporters’ Association.

The FA, Premier League, EFL, FA Women’s Super League, FA Women’s Championship, PFA, LMA, PGMOL, Kick It Out, Women in Football and the Football Supporters’ Association will unite for a social media boycott from 3pm on Friday 30th April to 11.59pm on Monday 3rd May, in response to the ongoing and sustained discriminatory abuse received online by players and many others connected to football.

Social media companies must do more to stop online abuse. That is why this weekend we are coming together with English football and other sports and organisations, to boycott social media and demand change.