Shrews make standing history: will Spurs & Oxford United be next?

This weekend Shrewsbury Town unveiled a new rail-seating section at New Meadow, the first to be used in the history of professional football in England. Here Jon Darch, from the Safe Standing Roadshow, tells us what that means for the standing campaign…

Saturday 4th August 2018 saw history made as Shrewsbury Town became the first club in England or Wales to introduce rail seating. This historic launch marked the latest chapter in what is turning out to be a key summer and autumn in the safe standing campaign.

As I’m sure you’re aware, at the end of June sports minister Tracey Crouch announced that her department would be launching an external analysis of the all-seater policy. She said that they would go out to tender to appoint an appropriate organisation to carry out the work and promised that initial findings would be available by the end of the year.

In a welcome move in the meantime, she has stepped up her consultation on the matter with interested parties, recently meeting representatives of both the Hillsborough Family Support Group and the Spirit of Shankly.

At club level, in addition to Shrewsbury’s launch of rail seats, Oxford United have announced that on 11th August they will start a trial of their ‘Ox Rail’ concept (an independent barrier fitted behind a row of conventional seats) and Tottenham Hotspur are evidently very keen to open the new White Hart Lane in September with seats incorporating an integrated barrier in place.

Spurs will, however, need a licence from the Sports Ground Safety Authority (SGSA) to do that and it is unclear whether they will get one. Oxford United too could face a similar regulatory issue in the future. While they have been given the green light to fit their independent rails while their ground is not governed by the all-seater policy, they have not, I understand, been given any assurance that they could leave those rails in place for any future season in the Championship, at which point (under current government policy) they WILL become subject to the all-seater regulations (as they have previously played their permitted quota of three seasons at that level). 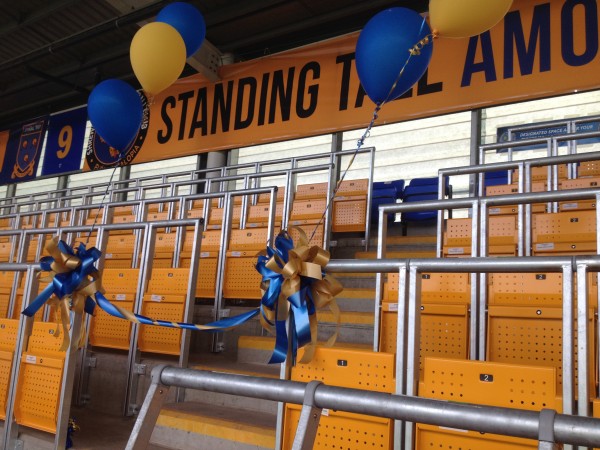 So the crux of the matter for Spurs, Oxford United and everyone else is this: does the addition of a rail (be it integrated with or independent of the seat) make a seat no longer “seated accommodation” as defined by the statutory orders governing grounds that fall under the all-seater policy? Spurs and Oxford United are clearly maintaining that it does not and that the addition of the rail merely enhances spectator safety in the event of persistent standing.

So, it’s going to be an interesting next six weeks, as we watch and wait to see whether the authorities agree with Tottenham Hotspur or stifle their plans.

And that’s not all that makes this an interesting summer and autumn for safe standing. Not only do we have the external analysis announcement, the new installations at Shrewsbury Town and Oxford United and the tantalising prospect of Spurs being given the green light, but also the impending publication of the sixth edition of the SGSA’s Guide to Safety at Sports Grounds, aka the Green Guide.

Due out (slightly delayed) in mid-October, it will contain best practice guidelines for the use of both “seating incorporating barriers” and “seating with independent barriers” wherever relevant legislation and competition rules permit.

We are therefore now at a stage where lower leagues clubs are installing various types of seating incorporating barriers, where clubs at higher levels are chomping at the bit to do likewise and where the government’s own safety experts have written the best practice guidelines for every one of those seating variants. So you really do have to ask: “What are we waiting for?”

Although I think that some of the variants may have a negative impact on capacity due to limiting the space available to standing fans, I do nevertheless hope that Tracey Crouch and colleagues wait no longer, give Spurs the go-ahead, tell Oxford they’d be fine in the Championship and allow all clubs with all-seater stadia to enhance spectator safety by fitting any form of seating incorporating barriers that is compliant with the new edition of the Green Guide.

Next year, her department could then use the findings of the external analysis for a more detailed review of the all-seater requirement per se to determine how it should be overhauled or whether it now needs to be scrapped altogether.

Thanks to PA Images and Jon Darch for the image used in this blog.

Tottenham Hotspur’s newly-announced plans for fan representation on the club’s board have been criticised by a leading fan group – with questions remaining about the new model.

Bury AFC take next step in forming a new club

Bury AFC have taken the next step along the road to ensuring there is a football club in the town next season by electing the Shakers Community Board this week.