The FSF Writers Awards in association with Cult Zeros

The inaugural Football Supporters’ Federation’s Football Writers Awards in association with Cult Zeros took place on Saturday evening (9th July) and what a night it was. Two hundred fans travelled to The Tabernacle in Notting Hill, London, to see awards handed out across six categories and the FSF was also very proud to hand out two Outstanding Contribution awards.

Nominations for the awards opened in May and the FSF was swamped with potential candidates – more than 250 different newspapers, websites, writers, bloggers, fanzines, and photographers were put forward by fans across the six different categories. The FSF would like to thank each and every person who nominated their favourite writers and publications. 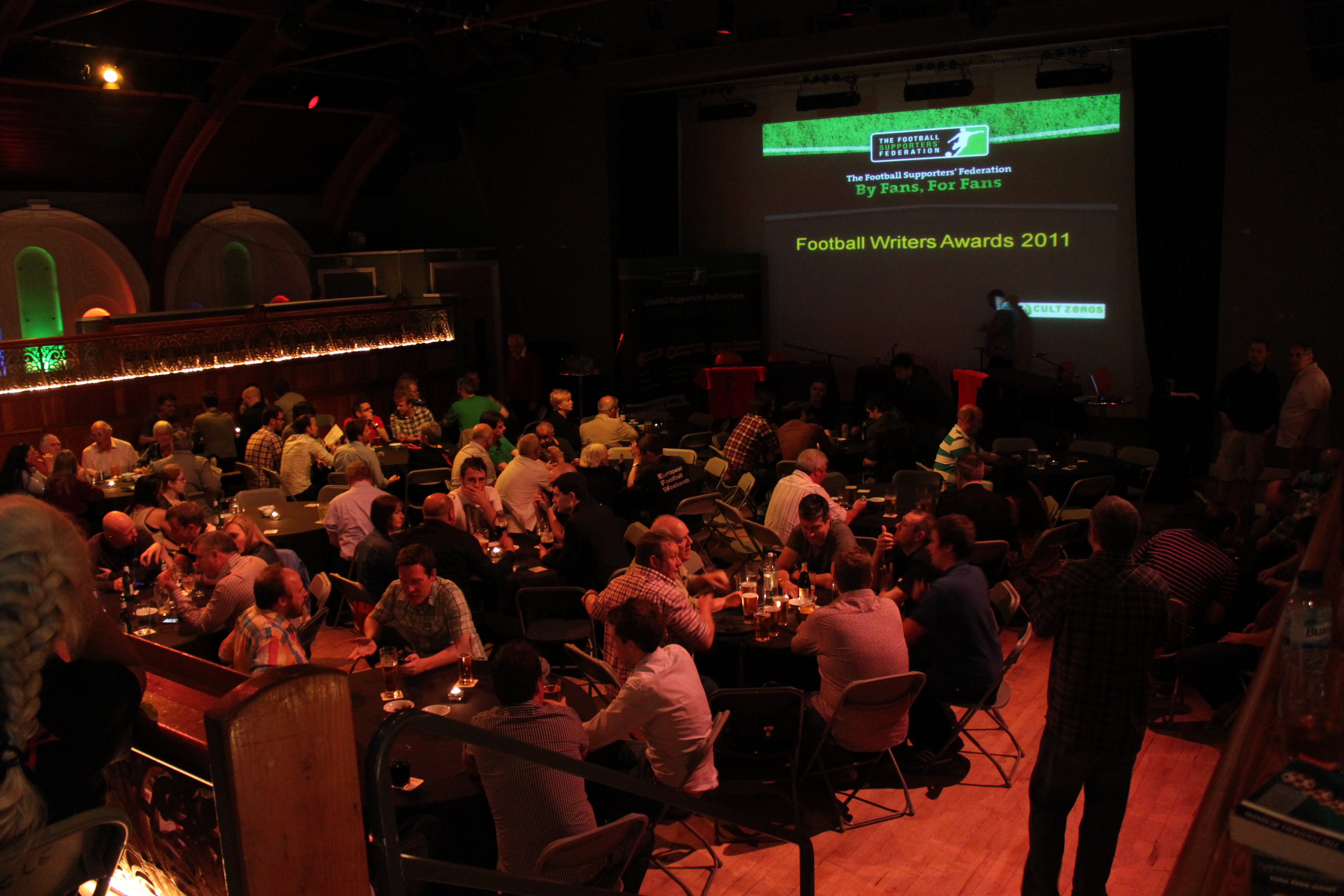 A shortlist of six was drawn up in each category by an FSF panel while the Amateur Photographer of the Year Award was judged by Stuart Roy Clarke, creator of the brilliant Homes of Football. Both the FSF Fans’ Newspaper of the Year and FSF Website of the Year were decided by an online vote on which almost 10,000 votes were cast.

The sheer volume of nominations sent in by FSF members ensured that standards were very high. Fans are extremely loyal to their favourite papers, websites, writers, and bloggers – being nominated was an achievement in itself and the FSF would like to thank all shortlisted nominees for their good work. The full shortlists are reproduced below.

However, awards ceremonies dictate that a winner has to emerge in each category and, without further ado, they were:

The FSF Fans’ Newspaper of the Year 2011 (online vote):
The Guardian – With an extraordinary number of talented writers, an online presence that is the envy of all, and an eye for the issues that really matter to fans the paper is a worthy winner.

The FSF Website of the Year 2011 (online vote):
Zonal Marking – Never has pass completion ratio seemed so interesting! Proof positive that there is an appetite from fans for real in-depth analysis. Michael Cox’s ZM is set to become a permanent fixture on the punditry landscape.

The FSF Football Writer of the Year:
Sid Lowe (The Guardian/Sports Illustrated) – Sid’s writing is consistently insightful, engaging, and puts football into its rightful cultural context. His interview with Barcelona’s Xavi in February 2011 will go down as a classic of its kind.

The FSF Blogger of the Year:
Kieron O’Connor (Swiss Ramble) – An expert in matters of finance who also knows a thing or two about football. Prepare to be astonished at what Kieron’s forensic eye can show up.

The FSF Fanzine of the Year:
The Square Ball (Leeds United) – Their passion for Leeds United shines through but never at the expense of critical analysis… and all for a quid. A worthy winner of the FSF’s inaugural awards.

The FSF Amateur Photographer of the Year:
David Bauckham – for images such as this at Hastings United (click the picture to enlarge). In David’s own words: “Smoke from a nearby bonfire was blowing across the pitch, which created a slightly hazy effect. The Lowry-esque silhouettes against the light remind me of a scene from Close Encounters Of The Third Kind.”

As well as these awards the FSF was also delighted to hand out two Outstanding Contribution Awards to When Saturday Comes and the Sunday Mirror’s Brian McNally. WSC recently celebrated its 25th anniversary and the award was given for the publication’s positive contribution at all levels of the game. It played a pioneering role in kick-starting the fanzine movement and has consistently informed and entertained fans over the past quarter of a century.

Brian’s award was in recognition for his contribution, as a national journalist, to the fans’ movement. During his long career in the media Brian has been a friend of the supporter and has constantly tackled off-the-field issues that would have otherwise gone unnoticed. He has also made a massive contribution to the FSF’s Free Lions publication for more than a decade which deserves our most sincere thanks. Top man.

The full list of shortlisted nominees for the Football Supporters’ Federation’s Football Writers Awards 2011 in association with Cult Zeros was:

The FSF Fans’ Newspaper of the Year 2011 shortlist:

The FSF Football Writer of the Year shortlist:

The FSF Fanzine of the Year shortlist:

The FSF Amateur Photographer of the Year shortlist:

The awards were handed out throughout the night which also played host to a comedy panel show (see right) featuring Barry Glendenning (Guardian), John Sitton (ex-Leyton Orient manager), Kevin Day (Match of the Day 2), and Paul Mortimer (ex-Charlton Athletic). If you would like to come along to any future events planned by the FSF, join today, and we’ll keep you up-to-date with all our latest news and events.

Vote now in the FSA Awards in association with BeGambleAware

FSA Awards in association with BeGambleAware

Hello! Forgive us a little introspection but you might have noticed that we have a new name and logo and wondered what that was all about?