The Wembley sale: what did fans think?

Yesterday it was announced that the Wembley sale, which was due to be decided upon by the FA Council later this month, had been called off after the offer was withdrawn.

Shahid Khan, owner of the NFL’s Jacksonville Jaguars and Fulham FC, withdrew his £600m offer for the national stadium – citing a lack of support across the game.

The decision follows on from last Thursday’s FA Council meeting, where it emerged the FA board and Khan may not have gained the clear consensus and majority needed to secure the sale.

Prior to the meeting, the FSF along with our colleagues at Supporters Direct consulted fans to gather their feedback on the potential sale – the supporter representatives argued our case at the FA Council meeting.

“More than 2,000 supporters took part in our consultation on the Wembley sale and we took that fan feedback directly to the FA Council last week,” said FSF chair and FA Council representative Malcolm Clarke. “Only one in three fans thought the FA should sell to Khan while two-thirds of supporters were against selling the stadium under any circumstances.” 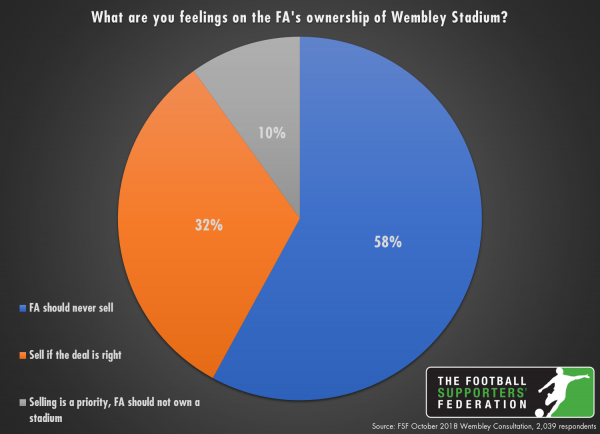 Our consultation clearly shows that supporters do not believe selling a national asset is the right long-term solution to the myriad problems facing grassroots football. Of the 2,039 supporters consulted 68.5% said more of the Premier League’s income should be invested in grassroots football facilities as an alternative to selling Wembley.

54% of supporters strongly disagreed that the FA should accept Khan’s package to fund grassroots. Finally – 64% said even if Wembley is sold football should be prioritised over other events.

We also asked supporters what their greatest areas of concern regarding the sale were:

The branding of the stadium was also cited as a concern by fans (34%), as well as the possible loss of England games from Wembley (31%) and potential development of the NFL as a rival to football in the UK (27%).

Following on from that we asked supporters for their thoughts on the place that the England men’s senior team should have at Wembley. The biggest chunk of supporters believed that the team should tour the country, as well as playing games at Wembley. 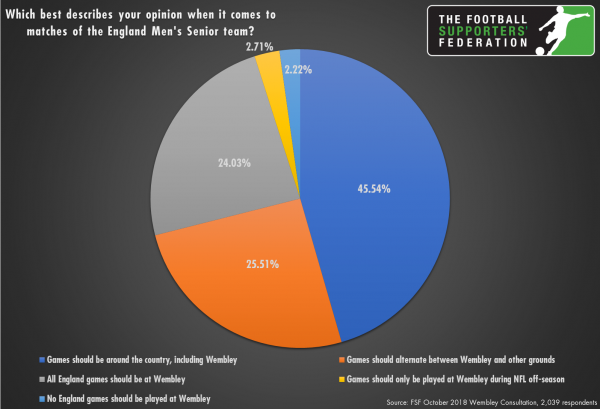 Now that the Wembley sale is dead, where can the money to improve grassroots football come from? In his appearance before the DCMS select committee earlier this year, former-England defender Gary Neville, like many of the fans responding to our consultation, argued for a levy on agents fees.

He told MPs that the sale would be a “short-term play” and wasn’t the answer – bigger questions about the redistribution of football’s growing TV revenues had to be answered first.

As our chair Malcolm said yesterday: “Whilst the majority of fans will be pleased that the stadium will remain in the control of the FA, they recognise the need for much greater investment in grassroots pitches.

“It is a sobering thought that the Wembley sale would have yielded £590m and yet English football pays £250 million each year to agents.”

Chelsea sale should see supporters given a stake in their club

Roman Abramovich’s enforced exit brings a unique opportunity to embed supporters at the heart of one of our most successful clubs. Tim Payton (Arsenal Supporters’ Trust) calls for the Government to do just that at Chelsea…

‘Nevertheless, she persisted’ – Did you know about the 50-year ban on women’s football?

This year is an historic one for the women’s game, marking 100 years since the FA banned women’s football from its clubs’ stadiums in 1921. The ban was overturned in 1971 – meaning 2021 is also the 50th anniversary of the FA righting that wrong.

An independent review into the events surrounding the Euro 2020 final has launched a survey which all ticket holders are invited to complete. It is being conducted by Baroness Casey of Blackstock for the Football Association (FA).

Our Free Lionesses Fans’ Embassy team is currently out in France supporting England fans through the Women’s World Cup. Here embassy team member Thomas Smith tells us more about the work they do…