UEFA must enforce minimum standards for away fans – survey says

UEFA must implement minimum standards across its club competitions say campaigners after the results of a Europe-wide survey of away fans was published this week.

Football Supporters Europe, which represents football fans across the continent, has been charting the away supporter experience in the Champions League and Europa League over the last two seasons.

The results of that survey show problems persist around ticketing, policing and stewarding with supporters experiencing significantly different treatment depending on the host club or nation.

Now FSE is calling on the European governing body to enforce minimum standards for visiting supporters – just like it does for on-field matters.

“Our main aim is to use the data generated from the survey and presented in this report to ensure that UEFA establishes mandatory minimum standards for the hosting of away supporters in its competitions.

“After all, players, match officials, and journalists are entitled to expect that minimum standards are met by every host club and stadium.

“Football supporters should be no different.”

Some of the biggest clubs in Europe were scored extremely poorly by supporters taking part in FSE’s survey.

For example, Barcelona were rated as one of the worst hosts for away fans in the Champions League. Supporters had serious concerns about the club’s stewarding, entry procedures, the position of the away end and much more.

The Catalan club earned the lowest Net Promoter Score (2.08) of all the clubs analysed while Celtic (8.96), NK Maribor (8.00) and FC Basel (7.71) scored the highest. Clubs like Celtic were praised for the information they provided to travelling fans, as well as the standard of their stewarding. 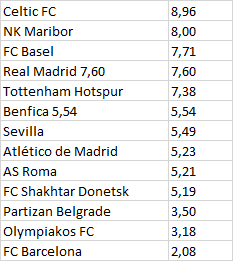 Testimony from one PSG fan read: “We had a fantastic trip to Celtic Park. From our entrance into the stadium to the post-match celebrations in the streets, the stewarding was great – there wasn’t even a hint of tension.”

Thanks to PA Images for the image used in this story.

The Government has been warned that the country’s historic league structure is on the verge of collapse and help is desperately needed.

Clubs must do more on gambling risks – survey

A new survey carried out by the Football Supporters’ Association (FSA) in conjunction with GambleAware’s safer gambling ‘Bet Regret’ campaign has found that football clubs have to do much more to educate their fans about the risks of gambling.

UEFA urged to reverse blanket ban on away fans

Football Supporters Europe (FSE) are urging UEFA to reverse their decision to put a blanket ban on away fans at European competition this season – arguing instead for a case-by-case approach.