“UP THERE IN THE GODS” Liverpool v Manchester United 1990

“UP THERE IN THE GODS” Liverpool v Manchester United 1990

The locals are cosy in their special place in the Anfield corner. The photograph was taken at the outset of The Homes of Football which would forever pay homage to Hillsborough, as well as Bradford before it.

When I took it I liked that this balcony was just off to the side of the mighty Kop. I waited for the character (with the hat) to stand beneath, looking up at them. I liked also the window to the sky beyond.

I find myself drawn to the Liverpool fans particularly again now, this season, 2014. An anniversary season when the team seem peculiarly drawn to the light. 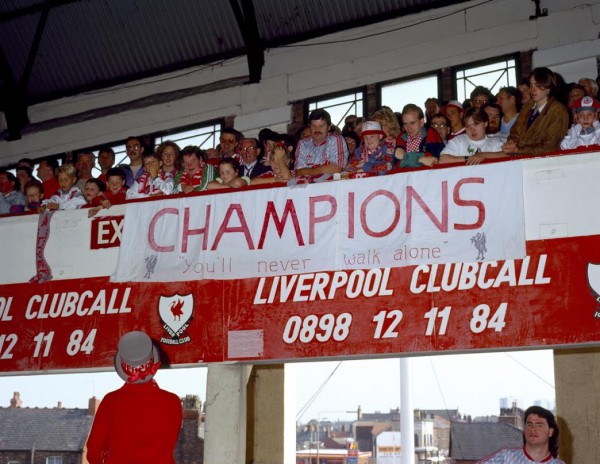 Manchester United are the latest club looking to provide a dedicated standing area after asking their local authority to give the green light to 1,500 rail seats at Old Trafford.

Manchester United have been given the go-ahead by their local authority to install rail seats at Old Trafford.

The Manchester United Supporters Trust (MUST) has launched a new “Sign for United” campaign urging fans to commit to supporter shareholding.