Villans Together: expanding the pride

This summer it will be exactly one year since the creation of Villans Together, a small but dedicated group of volunteers who are changing the way Aston Villa is perceived by its local community.

Like their cross-city rivals Birmingham City, Aston Villa has seen its local community undergo dramatic change in recent decades. And much like many other clubs located in diverse areas, Villa have struggled to get black and ethnic minority supporters through the turnstiles.

Before establishing Villans Together and finding a new enthusiasm for the game Nilesh Chauhan said he, like many other Asian fans, was about to turn his back on football.

“There was a point where I was about to pack it in,” he told us. “I was seriously thinking about not going to the match and even giving up Sunday league.

“The tipping point for me was when I was playing in Sunday league and an opposition player called me a black b****** and had me on the floor. It obviously spilled over and caused a mass brawl.”

Despite his earlier experiences, Nilesh was determined to continue to enjoy football and after meeting the FSA’s Anwar Uddin and learning about the Fans for Diversity campaign, decided to establish the new fans’ group Villans Together with his friend Saqib Taj.

“Me and Saqib have experienced that racism together, so we know what it’s like,” Nilesh says.

“The racist abuse you grow up with does take its toll, not just from fans of other clubs but your own fans.

“Despite all that there’s nothing like football, it’s worth fighting for. We know it’s getting better, it’s not like the 80s anymore – and we’re determined to show that to fans who would normally be put off by it.” 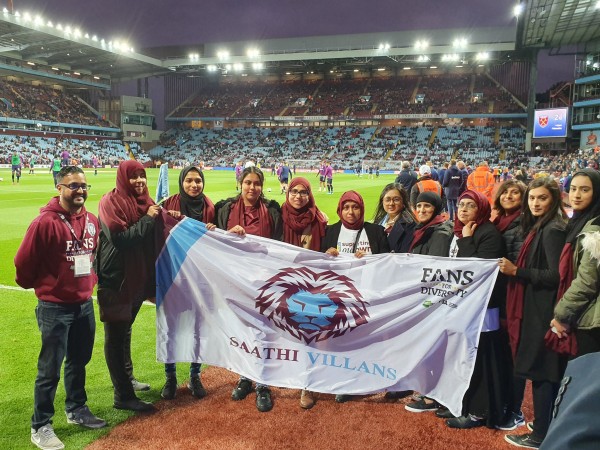 Since its creation 12 months ago Villans Together have been showing Black, Asian and ethnic minority fans the ropes at Villa Park, introducing them to the beats and rhythms of match-day life. And this week Villans Together partnered with the club’s foundation to launch the Saathi Villans, an initiative designed to encourage more women from Asian families to attend Villa matches.

For their first game, a group of women were given claret headscarves and taken along to Villa’s game against West Ham, with Nilesh acting as one of the guides.

“The feedback from fans we’ve helped has been really, really good,” Nilesh said. “Fans who think that the match isn’t for them have really enjoyed the experience.

“It obviously helps that there’s a real buzz about the club at the moment and the atmosphere at Villa Park has been incredible this season.”

Part of the Pride

As well as giving local people the confidence to go to the match, Villans Together have been enthusiastic campaigners promoting diversity and a range of activities around the club – driven on by a team of seven volunteers from backgrounds ranging from Lithuanian, Caribbean, Hindi and more.

With the help of the fans for Diversity campaign they’ve established a new website, had banners made and developed a vibrant social media presence. And in May they were recognised by Aston Villa, being presented with a “Part of the Pride” award.

“The Club have been really interested in what we’ve been doing and incredibly supportive,” Nilesh said.

“We were delighted to be acknowledged by the club with the Part of the Pride award. Dean Smith came over and congratulated us. He’s such a down to earth guy, it really meant a lot to us.” 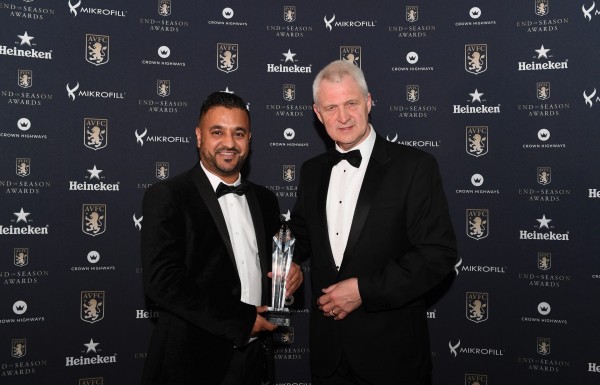 As well as being recognised by their club, Villans Together also made the shortlist for one of the awards at the inaugural Fans for Diversity conference, being held in London this Friday.

Thanks to PA Images and Villans Together for the images used in this blog.

Football comes together in the face of COVID-19

In the face of pressures on local communities brought on by the onset of the COVID-19 pandemic, with people unable to work or feed their families, and with vital community lifelines lost, football – both through its clubs and supporter groups – has stepped into the breach.

Football comes together in the face of COVID-19 – Part II

In the face of pressures on local communities brought on by the onset of the COVID-19 pandemic, with people unable to work or feed their families, and with vital community lifelines lost, football – both through its clubs and supporter groups – has stepped into the breach. You can read part one of our round-up here.

Football’s message to fans: “Together we will get you safely back into grounds”

The Premier League, EFL, FA, Women’s Super League and Women’s Championship have released a joint open letter to supporters reaffirming their commitment to getting fans back into stadiums – and doing it safely.

Supporters from Rochdale and Oldham Athletic will join forces this weekend at a march, organised by Dale Supporters’ Trust, in response to a legal claim against the club and trust by former investors Morton House MGT.