We don’t like Mondays: lessons from Germany’s Monday protests

You may have seen England midfielder Jadon Sancho being pelted with tennis balls recently in the Bundesliga – the Dortmund man in the wrong place at the wrong time as the Nuremberg fans delivered their protest against Monday night football.

“Gegen Montagsspiele” has been the simple message plastered across banners at every ground in the Bundesliga this season as the league and broadcasters attempted to introduce Monday night games in the top flight for the first time.

The backlash was ferocious to say the least.

“There have been huge protests,” says Martin Endemann of Football Supporters Europe. “To see a stand like the Südtribüne at Dortmund half empty was incredible.

“I think the clubs were surprised by the size and scale of the protests – they realised that this could end very badly for them.”

The Bundesliga’s attempts to introduce televised Monday night games came at a time when relations between supporters and the German football authorities were at an almost all-time low.

Discontent has been growing over the creeping commercialisation of the game, threats to the 50+1 rule on ownership, allowing a Chinese under-20 side to play in the fourth tier, our old friend VAR and much, much more.

“Monday night was the final straw,” Martin added. “It was seen a symbol of everything wrong with German football.

“There was talk of putting 300km restrictions on these TV games years back, but this never materialised.

“The DFB [German FA] has talked to fans but there’s a lot of mistrust, fans feel like they’re not being listened to, especially as Monday games in the third division were announced shortly after the talks.

“German supporters believe Monday night games are simply unacceptable – the distances involved, the inconvenience. It has to stop.”

Monday night football first arrived in Germany back in 1993 in Bundesliga 2 where, much like in English football, it has endured ever since. Mirroring the Premier League and EFL, German football has added kick-off times across the weekend for TV including Friday, Saturday and Sunday evenings.

“Opinions on the Friday and Saturday evening games are mixed, some supporters enjoy them,” Martin says. “But Mondays are universally disliked which is why the protests have been so focused.” 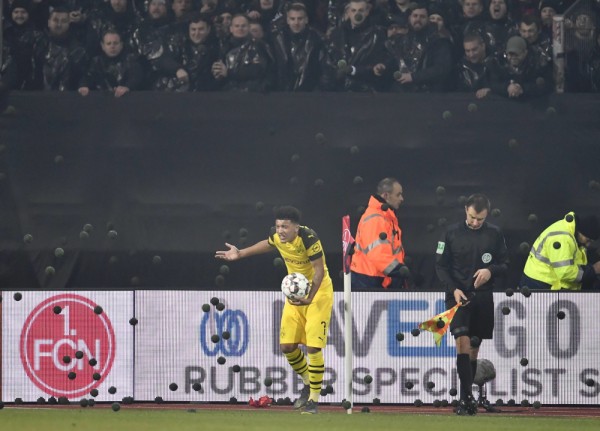 Their unpopularity was proven this month by figures coming out of Spain – in the 23 match-days of the current La Liga season, 18 games have been played on Monday with analysis revealing a 12.5% drop-off in attendance compared to matches played on Saturday and Sunday.

In one stand out example, just 14,328 fans turned up to the Estadi Cornellà-El to see Espanyol against Athletic Bilbao – a drop-off of 31.7% compared to their attendances at Saturday and Sunday games.

Back in England, fans of Newcastle United are all too familiar with the misery of travelling away on Monday nights. April’s TV selections see them away on a Monday night again, this time at the Emirates to face Arsenal – their 14th Monday night selection in six years, all of which have been away from home.

“December 2013 was the last time we had a Monday night home game, that says it all really.”

Newcastle United have had more Monday night away trips than all of the “big six” since 2013 despite spending a season outside of the Premier League.

Their support, like many clubs who take large numbers away, is routinely taken for granted – their contribution to the occasion regularly becoming a significant part of the broadcasters’ narrative during the match.

“It feels like there’s no-one we can turn to,” Thomas said. “No-one cares – the club do what they can, but the broadcasters always get their way.

“We get support from the FSF and some friends in the media, but beyond that there’s nothing.”

“Monday night games mean more time away from family, more time off work. It gets to the point where you can’t justify going to some of these games.”

What can be done?

Much like in England, there’s a diffusion of responsibility over the impact TV has on match-going fans – supporters blame broadcasters, broadcasters blame league organisers who in turn blame the clubs. However, Martin is clear where the blame lies.

“The clubs decided on this,” he said. “They wanted more money and they voted for it.

“They try to sneak out of it and avoid taking responsibility. As a result, a lot of pressure gets directed towards the league and broadcasters.”

The protests in Germany have forced the Bundesliga to back down and Monday night games will not be included in the league’s next TV deal due to come in from the 2021-22 season.

Is such a victory achievable for supporters in England?

“Even though Monday games are out of the next TV deal there will still be protests,” Martin says. “Our advice to fans in England is to keep up the pressure on your clubs, don’t give up.

“Keep being vocal about it – ultimately it’s the clubs’ responsibility so don’t let them get away with it.”

Thanks to PA Images for the images used in this blog.

“Every time the big clubs don’t get what they like, they threaten to break away”

Sussex Police say they have learned lessons and taken action against senior officers following complaints from Crystal Palace fans who travelled to Brighton in November 2017.

The FSA have partnered with the Non-League Paper to gather the views of thousands of football fans across the country on how they believe football can safely return from its COVID-19 suspension with spectators in the stands.