“We love standing at Brentford”: how the Bees deal with the all-seater laws

Brentford FC are set to move from the 104-year-old Griffin Park during the 2019-20 season, and as Gemma Teale tells us, the club’s supporters hope they can take standing with them…

“I’m a bit of a standing evangelist,” says Gemma Teale from Brentford Independent Association of Supporters (BIAS). “I love standing, for me it’s simply the best way to watch football.”

Gemma has been standing on Griffin Park’s famous terraces for the best part of 24 years, and over that time has been converting sceptics to the standing cause.

“We know there are people who have doubts about standing and the huge open terraces of old.

“In reality standing at football in 2018 is nothing like that.

“I work for an international company and bring my colleagues from all over the world to experience the standing section behind the goal. They always thoroughly enjoy it.”

Brentford were promoted to the Championship back in 2014 after a record-breaking promotion season in League One and are now the only club with purpose-built standing areas in the division – their situation highlighting the illogical nature of the current regulations.

“It’s nonsense,” Gemma says. “Just because we’ve been playing in the Championship for a certain amount of time and moving down the road doesn’t mean standing suddenly becomes unsafe.”

Having just completed their fourth season in the Championship, normally they’d be required tear down their terraces and replace them with unwanted plastic seats – however, as Brentford are currently building a new ground they’ve been granted an exemption to maintain their standing area.

“The club are really, really pro-standing,” Gemma says. “And they’re looking at a potential standing section in the new ground’s west stand.

“Fans, the owner, the chief executive, the ops manager all want it to happen.”

The 2018-19 season is expected to be Brentford’s last at Griffin Park, with the new ground opening halfway through the 2019-20 season.

“Obviously moving to a new ground is a huge moment for any club,” Gemma said. “So they’re concerned about the impact it will have on atmosphere.

“Having a designated standing section at the new ground is one way of protecting against that.”

Brentford FC are keen to pilot a modern designated standing area at their new ground and have been closely following the debate surrounding the all-seater regulations in the top two divisions.

“The club are very keen to have a standing pilot at the new ground,” Gemma told us. “We’d be ideal for it, the club and our match-going supporters have so much experience of standing.

“Brentford has the experience and expertise to manage standing – they don’t have any problems identifying misbehaviour or other issues arising in the standing sections.” 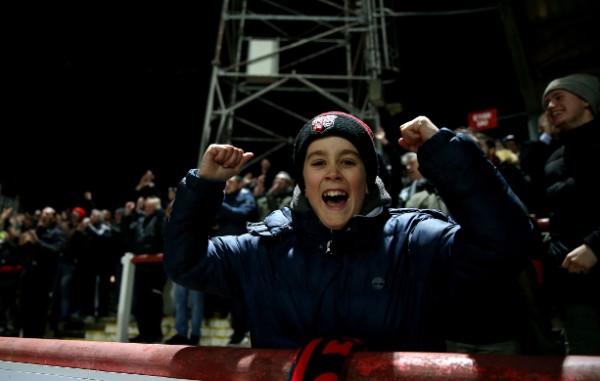 As the standing campaign has progressed over the years, supporters have had to debunk countless myths about standing at the match.

The latest has been diversity – with its detractors arguing that standing areas will undo the progress made on football’s inclusivity over the last 30 years.

It’s a line of argument that Gemma, co-founder of Brentford’s LGBT fan group LGBeeTs, has very little time for.

“It’s the biggest load of nonsense I have ever heard in my life,” Gemma says. “Just because someone is standing at an event doesn’t mean homophobia is more likely to come out of their mouths.

“Discrimination happens in towns and cities across the country so using that as an argument against standing is bizarre.

“Around half of our members stand at Griffin Park and reports we have had from members where they’ve had issues have all been in seated areas.”

A survey by the Arsenal Supporters’ Trust last year seems to confirm Gemma’s impression of standing – in a survey of more than 7,000 Arsenal fans more than 95% of fans who identified as LGBT were in favour.

Fans from black, asian or other minority-ethnic backgrounds (BAME) were more likely to support standing areas than their white counterparts. Additionally, the survey found 91% of women backed standing.

“The standing section is really diverse,” Gemma said. “It’s got different ethnicities, all age groups. Everyone loves it, it’s a great experience and the best way to watch football.”

“In standing areas, you can move a bit more. You have slightly more freedom to group up with others. It gives you an opportunity to talk to and get to know everyone around you.

“It encourages a good atmosphere and, in that context, I think people are more accountable, more thoughtful and can be challenged.”

Like supporters across the country, BIAS have been lobbying politicians to back the choice between standing and sitting being made available in the top two tiers.

“It’s great to have the support of our MP Ruth Cadbury and the club are talking to our local authority Safety Advisory Group with a view to getting them on board, too.

“Ruth was previously neutral on the issue, and went along to the FSF’s APPG event on standing with an open mind.

“She listened to the evidence and realised, like most do, that the arguments being made against standing areas are ludicrous – so we’re really pleased to have her support.”

The Parliamentary debate on standing in England & Wales is due to take place on Friday 25th June.

Thanks to PA Images for the images used in this blog.

This week the Government has confirmed that it will be implementing its manifesto commitment to reform the all-seater legislation covering the Championship and Premier League.

At the weekend Government ministers confirmed that further standing areas will be coming to the top two divisions before the end of the season – signalling an end to the all-seater era.

Bury FC’s threatened expulsion from the EFL rumbles on and should haunt all fans.